How to help animals affected by Florence

While many families were able to evacuate safely with their pets, many were left behind in their homes or at animal shelters. 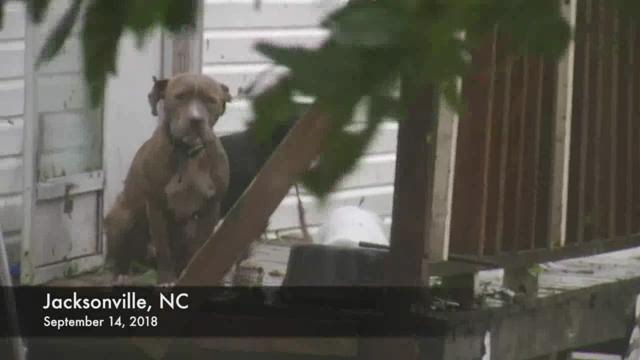 Florence was downgraded to a tropical storm late Friday, but heavy rains and life-threatening flooding are still drenching the Carolinas. Florence hasn't just affected humans. Hundreds of animals have been caught up in the deadly storm as well.

While many people safely evacuated with their pets, other animals were left behind either at shelters or in homes. In North Carolina, hundreds of people stood in line to pick up foster dogs from coastal shelters for the weekend before the storm made landfall.

The line of folks waiting to pick up foster dogs for the weekend so coastal shelters can evacuate here before #HurricanceFlorence. Many more behind me. Sometimes humans are okay. ❤️ pic.twitter.com/niyCRDygOV

Here's how you can get involved in the efforts to help animals affected by Florence.

Several shelters outside of the storm's path have already taken in animals from shelters that evacuated. Many of these shelters are now waiving or providing discounted adoption fees for the animals they rescued.

The Human Society of Treasure Coast in Florida took in 48 animals that were evacuated from a shelter in South Carolina. Adoption fees at the shelter are currently waived in an "Emergency Adoption Special" until Sunday.

The Atlanta Humane Society also took in cats seeking shelter from the storm and is now offering to waive adoption fees for their cats six months and older through Sunday. A list of cats ready for adoption can be found on their website.

The organization is also matching all donations given to support animals impacted by Florence. They will match every dollar donated up to $300,000 until September 30.

The Animal Welfare League of Arlington in Virginia is also waiving all adoption fees through Sunday. The more animals that are adopted, the more space will be made for animals from shelters in the areas affected by Florence.

Be a #HurricaneHero by adopting a pet from AWLA this weekend! Adoption fees for ALL pets will be waived from now until Sunday at 4PM! We want to make space in our kennels for animals from shelters in hurricane-affected areas. We have so many wonderful pets waiting to meet you! pic.twitter.com/GNHo4DfK48

Donate to shelters in Florence's path

If you cannot adopt or foster an animal, you can also help by providing monetary donations to local shelters affected by the storm. Animals in shelters need food, medical attention and transportation during evacuations, and shelters often do not have the extra budget for the influx of animals that arrive during a natural disaster.

The Charleston Animal Society in North Carolina is accepting donations to cover those expenses. Items such as food, leashes, pet carriers, waste bags, litter and litter boxes can also be donated to affected shelters.

The American Society for the Prevention of Cruelty or Animals (ASPCA) has also deployed a disaster response team to affected areas. They are accepting donations on their website to help with disaster relief.