A year ago, 14 students and three staff members at Marjory Stoneman Douglas High School were killed in a massacre. 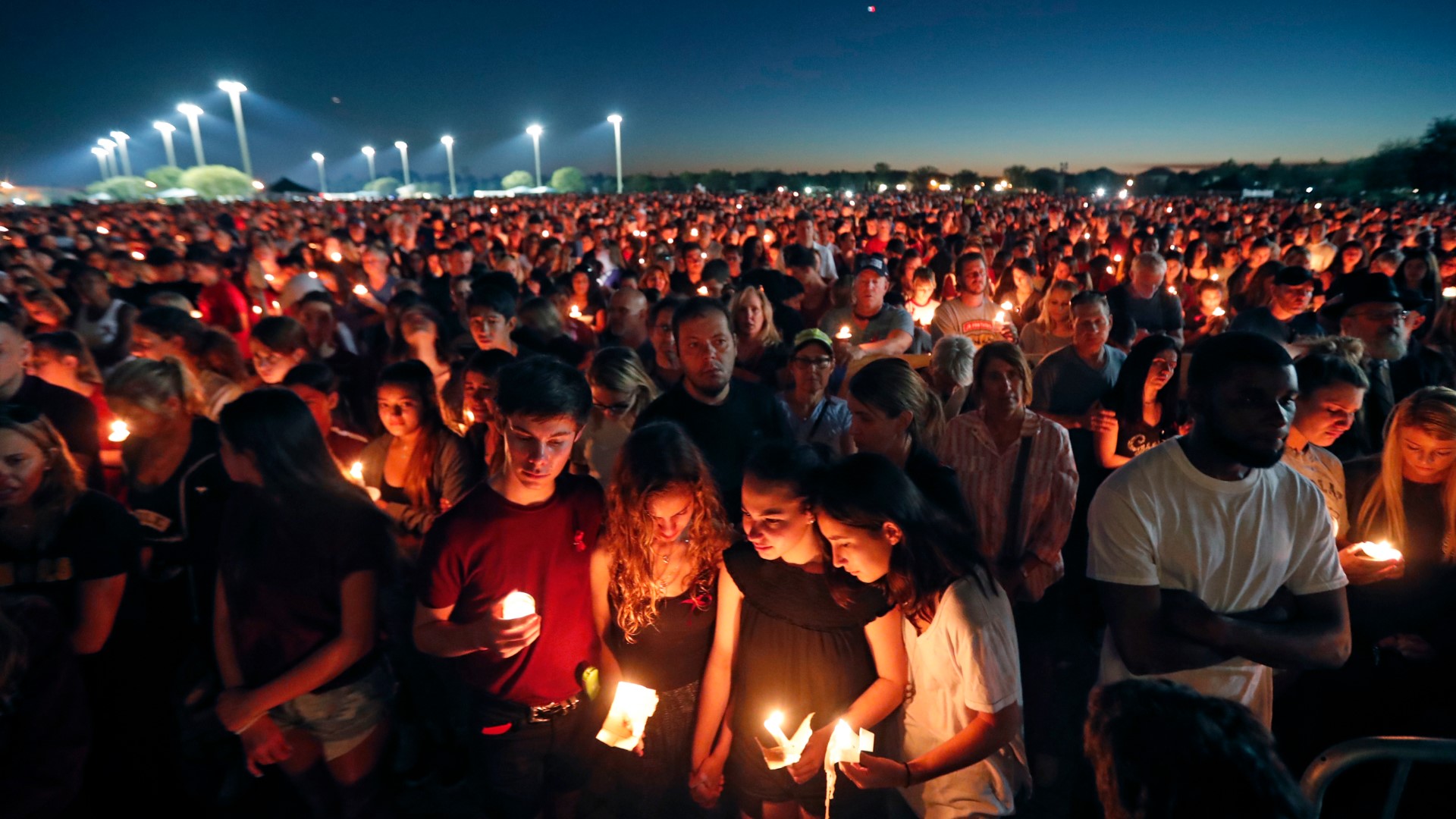 PARKLAND, Fla. — The communities and families terrorized by the Marjory Stoneman Douglas High School massacre will spend Thursday's anniversary visiting graves, packing meals for the needy and contributing to other service projects as they quietly remember the 14 students and three staff members who lost their lives.

Victims' families say they will mourn out of the public eye. The Parkland school will be on a half-day schedule: Stoneman Douglas students will serve breakfast to first responders and will be dismissed nearly three hours before the time the shooting began, about 2:20 p.m. Many say they will avoid school altogether. Students at other Broward County schools will also work on service projects and observe a moment of silence.

A ceremony honoring the victims will be held in a park near the school where students also will prepare meals for disadvantaged children. A nondenominational, temporary temple will open in neighboring Coral Springs, where half the school's students live. Visitors will be allowed to mourn, contemplate, leave mementos and write message on its walls. The temple will remain open until May, when it will be burned in a purification ceremony.

For the victims' families, there is no day without pain, so while Thursday may cut a bit deeper, in some ways it won't be any different than the previous 364 days. The families remain outspoken in their demand that school Superintendent Robert Runcie be fired and against the reinstatement of suspended Sheriff Scott Israel, saying their inaction and mistakes allowed the shooting to happen. Still, most who have spoken publicly say they plan to spend Thursday quietly.

Jaime Guttenberg's family, for example, will visit her grave, while Nick Dworet's will go to the beach where his ashes were scattered in the ocean. Athletic Director Chris Hixon's family is preparing for a race in his honor on Saturday.

"We are going to simply reflect and remember," said Tony Montalto, president of the victims' families' organization, Stand With Parkland. "That is the best thing."

Stoneman Douglas students will mark the tragedy by working on service projects. They can also receive mental health counseling and visit therapy dogs. Volunteers will provide massages and manicures. Security will be heightened at Stoneman Douglas and throughout the district. Maintenance workers will be kept out of Broward schools to avoid banging and loud noises that might upset students and teachers.

Mickey Pope, the district's chief of student-support services, said the staff worked with mental health counselors, community groups, the victims' families and others for four months to devise a plan that they believe will honor those killed and allow students and staff to mourn.

Many Stoneman Douglas students are skipping school Thursday. For some it's too emotional; others don't want to be in the spotlight.

Jessie Frengut, a senior, said she and friends, including one wounded in the attack, are going to a farm to spend time with animals trained to comfort people with post-traumatic stress disorder.

"It will just be better for us if we do something on our own," she said.

Alexis Grogan, a junior, said she'll spend the day picking up beach trash, dedicating her work to those who died.

"I survived something and I don't want to waste what I call a second chance at life because those who have passed don't get that," she said. "We have to make a difference for them."

San Francisco-area artist David Best began building temples honoring the dead in 2000 at Nevada's Burning Man festival after a protege died in a motorcycle accident. He has since built them worldwide, including in Northern Ireland for those killed in political strife and in Nepal for the 2015 earthquake victims. Like those structures, the Stoneman Douglas temple will be burned.

This creation, "The Temple of Time," represents the indefinite period it will take for the community to come to grips with the slayings. Best rejected naming it "The Temple of Healing" because he said that is impossible for the victims and their families.

It's an Asian design with a spire roof that has intricate designs cut into it.

"It is a big, ornate structure that someone will come and put their faith in. I am the carpenter; I don't write the doctrine," Best said. "Each person can come in with whatever they have."

Best's regular volunteers — 26 of them came to Florida from around the country — scrambled last week to finish the approximately 1,600-square-foot (150-square-meter) temple. Community members donated their time to help.

Plywood sheets and cedar beams were piled everywhere as the building took shape, meeting Florida's stringent hurricane code even though it will be burned before the storm season starts. Most construction materials and other expenses are being paid by former New York Mayor Michael Bloomberg's public arts foundation, but neither Best nor his workers are paid.

"The initial reaction (people have) is, 'This is really crazy, why are you burning this? It is really beautiful.' But at the end of the period it usually makes sense to everyone," said volunteer Paul Walker, an English artist who now lives in San Francisco. "The fire is very therapeutic."