Almost 50 bills have been introduced in 24 states targeting conversion therapy. 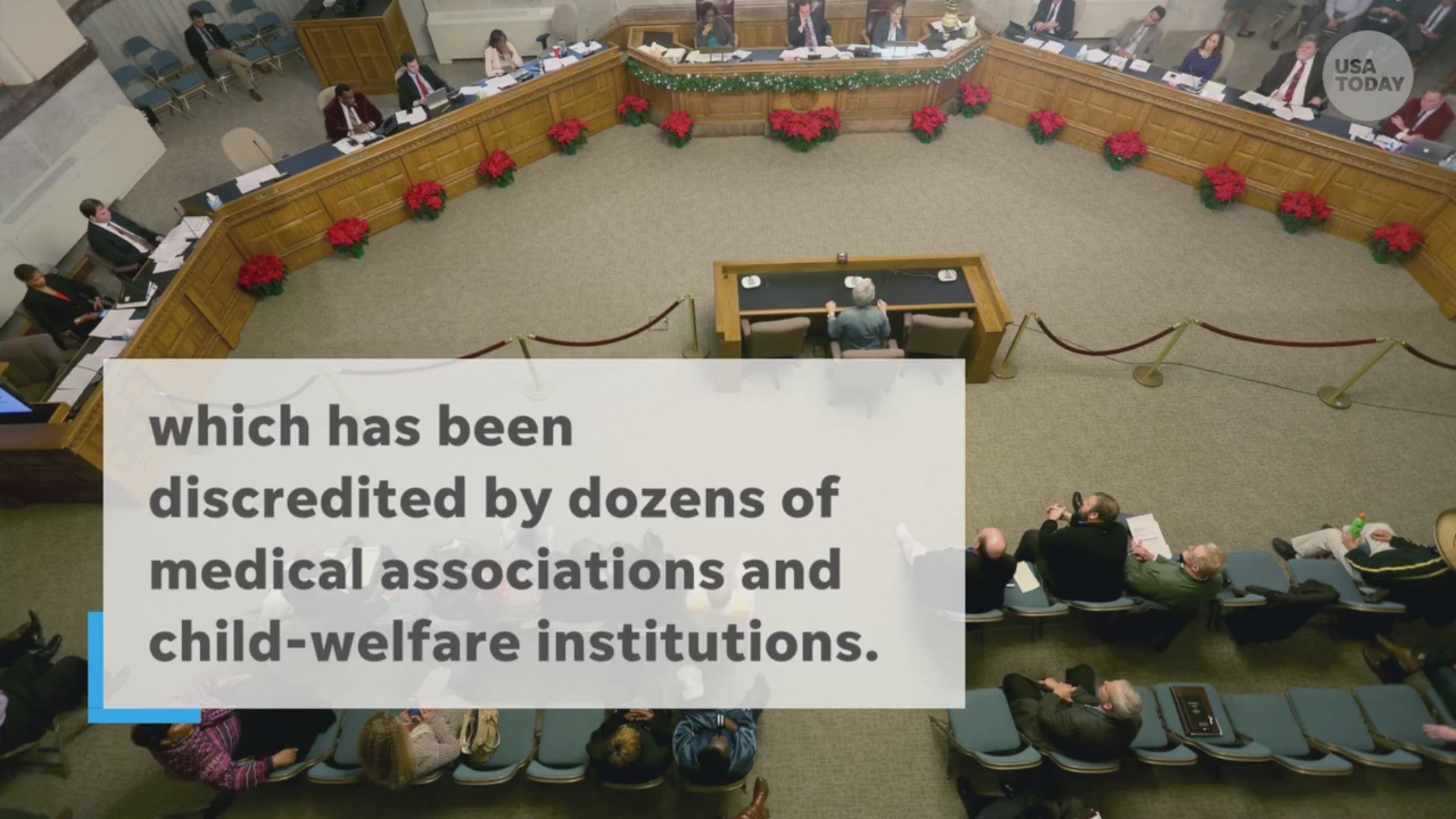 A record number of jurisdictions this year are taking aim at conversion therapy for minors: an attempt to change someone's sexual orientation or gender identity through tactics as obvious as hypnosis or as subtle as inducing shame.

Almost 50 bills have been introduced in 24 states targeting conversion therapy, which has been discredited by dozens of medical associations and child-welfare institutions. On Tuesday, 11 of them — including the American Academy of Pediatrics and the American Counseling Association — released a letter urging states to make such bills a priority.

“Being LGBTQ is not an illness,” said Xavier Persad, legislative counsel for the Human Rights Campaign, an LGBTQ rights advocacy group. “It is false that being LGBTQ is wrong and a disorder.”

Momentum has been building in legislative sessions this spring for the bans, which prohibit state-licensed mental health professionals from practicing conversion therapy for anyone under 18.

On March 28, Washington state became the 11th state plus the District of Columbia to enact a law or regulations. California was the first in 2012. And on April 4, Maryland lawmakers passed a ban that Gov. Larry Hogan has indicated he will sign. Many bills are still in play.

Local jurisdictions have taken up the cause as well. More than 40 municipal bans and resolutions condemning the practice are on the books in cities and counties — in Ohio, Pennsylvania, Florida, Wisconsin, Washington, Arizona and New York — seven of which passed in 2018.

One of those was approved March 27 by the Milwaukee City Council, which makes Milwaukee the first city in Wisconsin to pass such an ordinance.

Last year, two conversion therapy bans were signed into law by Republican governors. "This is something that is bipartisan and should be," Persad said.

Even with legal protections, conversion therapy could still take place in a religious setting because ministers would not be covered under the law unless they were state-licensed health professionals. Activists are working with faith leaders to share the perils for minors, Persad said.

Foes of bans say there is no precedent to outlaw this kind of therapy. "We think people should have the freedom to pursue their own goals in therapy, and therapists should be free to assist them," said Peter Sprigg, a senior fellow at the Family Research Council.

There are only "anecdotal" accounts of conversion therapy being harmful, Sprigg said, and some people may sincerely be seeking an intervention. "Some people experience same-sex attraction that is unwanted. Maybe others want to avoid physical health risks or have strong religious convictions and want help to conform their behavior to religion."

But proponents says the consequences on young people are devastating.

“I don’t even like the term because it legitimizes it as an actual therapy when it isn’t,” said Scott Leibowitz, medical director of Behavioral Health for the THRIVE Gender Program at Nationwide Children’s Hospital in Columbus, Ohio. “It is more of an effort or intervention done within the health care setting specifically designed to try to change or alter someone’s gender identity or sexual orientation under the notion that it is pathological.”

In earlier days, therapists may have used more blatant tactics such as triggering nausea while showing a young person a homoerotic image or applying electric shocks.

Aspects of conversion therapy now are more covert or understated, said Leibowitz, who co-chairs a committee on LGBT issues for the American Academy of Child and Adolescent Psychiatry.

There could be conventional counseling, spiritual interventions or even aversion therapy, such as having the person snap an elastic band around a wrist when aroused by same-sex photos.

“Even a negative facial reaction that a therapist might make when a youth declares a certain sexual attraction can induce shame and perpetuate the notion that ‘there is something wrong with me,’” Leibowitz said.

The interventions also could lead therapists to overlook other factors that might be causing depression or anxiety — and can leave young people mired in a lack of self-worth well into adulthood, Leibowitz said.

““This is like trying to convert a left-handed person to being right-handed without factoring in the harm you’ll do along the way. … I liken it to fraud,” he said.

A voice close to the issue

Despite the legislative momentum, young people remain vulnerable. At least 20,000 LGBTQ people ages 13 to 17 will undergo conversion therapy from a licensed health care professional before the age of 18, according to a 2018 study by the Williams Institute at UCLA. And about 57,000 will receive treatment from a religious or spiritual adviser, the think tank found.

For Randy Thomas, 49, of Orlando the issue is raw. After Thomas came out in 1987 at 19, his mother kicked him out of the house and he moved in with a drag queen who happened to be Christian.

He warmed to the faith and became Christian at 24 in 1992 and “got involved in the conservative side of things pretty quickly.” From 2002 to 2013, Thomas worked with Exodus International, a now-defunct group whose mission was to steer gay Christians into a "straight" life.

As joyful as it was to embrace his Christian faith, his work with Exodus took Thomas down a dark path by a group that actively promoted what it called “reparative therapy.”

“I thought I found life outside of dysfunction, but this was a new dysfunction. It was just a different jail cell,” he said.

Thomas hit the breaking point in 2013 when a friend of 23 years who had gone to an Exodus support group Thomas led came back out as gay — and committed suicide because he couldn’t reconcile his faith and his identity as a gay man.

“I was just wailing. I lost it,” Thomas recalled. “I thought I can’t do this anymore — this is the end of me at Exodus.”

Thomas, who had risen to the position of executive vice president of the group, decided with others that Exodus needed to be shut down. In the aftermath, he lost all of his Christian and conservative friends.

Then Thomas took an extraordinary step: He reached out to gay activists who had been adversaries in his time with Exodus, and he finally found the peace he sought for so many years.

“They were so life-giving to me. They could have really raked me over the coals for some things,” he said. “But they offered me friendship, love.”

Thomas came out again in 2015 with a new revelation that it was possible to have a strong faith in God — and be gay: “You could be a happy and healthy soul.”

Now, Thomas, who proudly celebrates his Christian faith, is an advocate against conversion therapy. He is starting a new organization called Thrive LGBT, which he hopes will help others escape the dangers of religious stigma and heal from intervention attempts.

His simple message for young LGBTQ people: “They can be healthy and whole — and believers.”