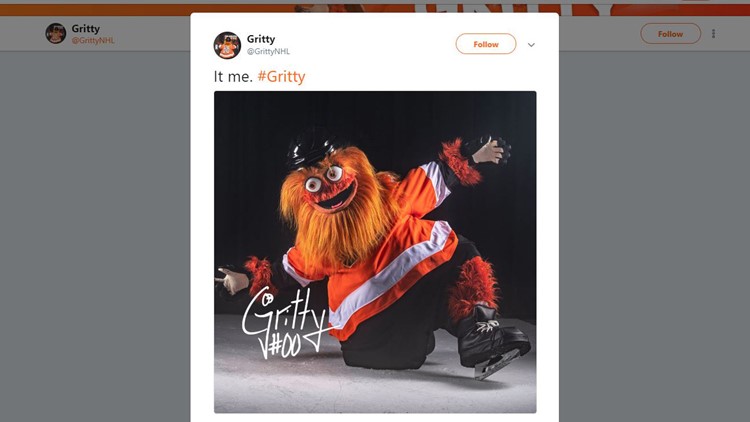 Photo by: Twitter screenshot
The Philadelphia Flyers have unveiled their new mascot, Gritty.

The Philadelphia Flyers unveiled their new mascot Monday morning and oh boy it is something.

Meet "Gritty," described by the team as the ultimate Flyers fan, who is a "fierce competitor" and "loyal but mischievous."

The debut of the googly-eyed furry creature has some already deeming it the scariest mascot they've ever seen and quite frankly "nightmare-inducing."

And where did Gritty come from? Well, the Flyers explained that recent construction at their arena disturbed his secret hideout "forcing him to show his face publicly for the first time."

The reaction across the internet so far has been a mixture of fear and humor...but mostly fear.

The #Flyers introduced a new mascot today. It has orange hair and is named Gritty, because of course it is.

Is this the most horrifying mascot you have ever seen? pic.twitter.com/LvSx5MW7IF

"The Oilers have the scariest mascot in the league."

Like if you’re a child, how are you not terrified of Gritty? The Phanatic, Franklin, Swoop....EVEN THE UNION’S mascot all look kid friendly.

If I was a kid I’d be horrified of that orange abomination near me. 😂#Flyers

Most adults were gonna hate this mascot regardless of what it was, so I honestly sorta respect that the Flyers just decided to go full nightmare-inducing with the thing.

Gritty even had the perfect creepy response to the Pittsburgh Penguins mocking him on Twitter.