What to watch during Trump's 2nd impeachment trial

A two-thirds vote of the Senate would be needed to convict Trump of the 'incitement of insurrection' charge. 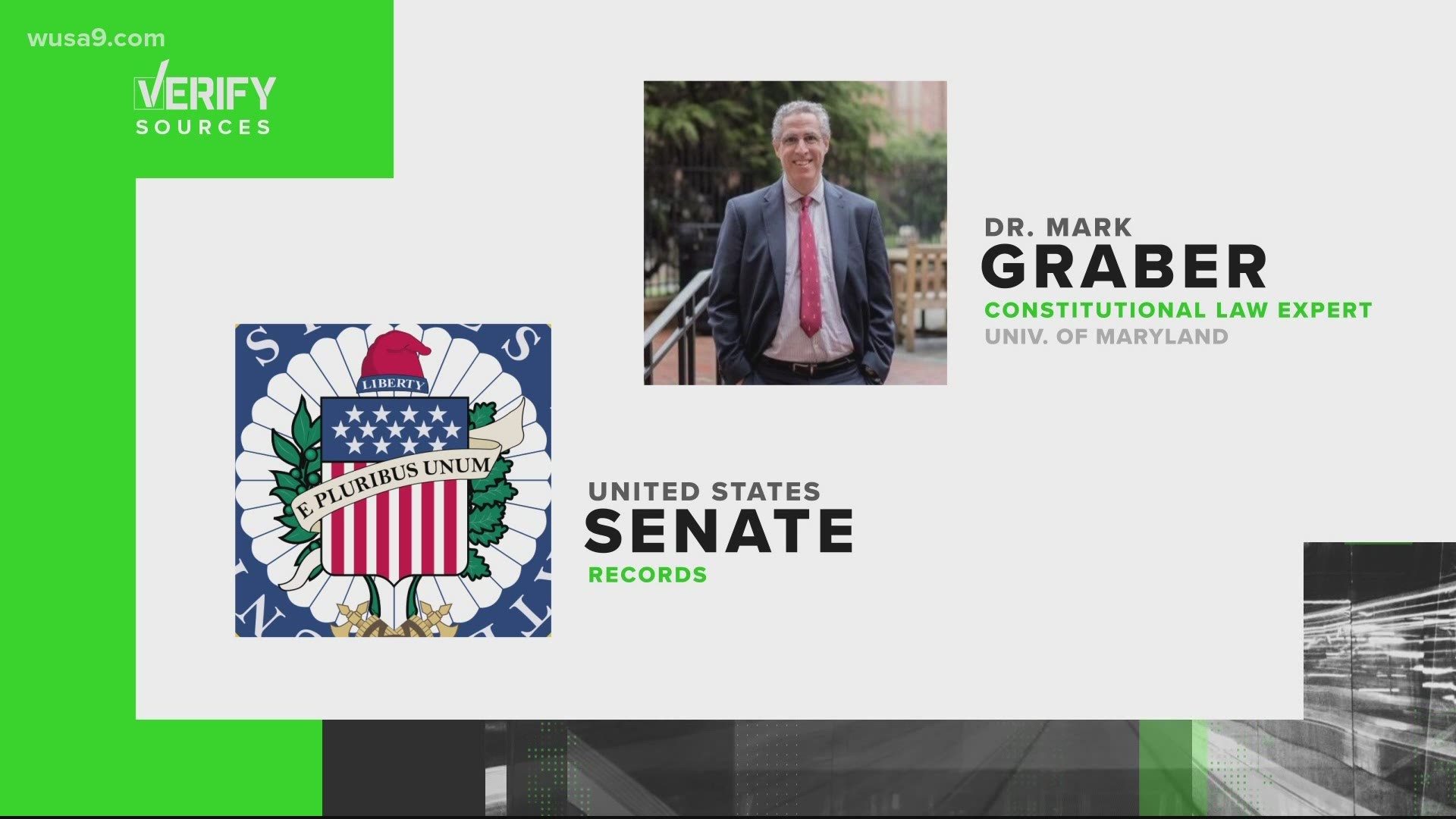 WASHINGTON — Former President Donald Trump’s second impeachment trial begins on Tuesday, a solemn proceeding that will force lawmakers to relive the violent events of Jan. 6 as House Democrats prosecute their case for “incitement of insurrection.”

The nine Democratic impeachment managers for the House, which impeached Trump last month, argue that he alone was responsible for inciting the mob of supporters who broke into the U.S. Capitol and interrupted the presidential electoral count.

Lawyers for Trump argue that the trial is unconstitutional and say the former president was exercising freedom of speech when he told his supporters to “fight like hell” to overturn his defeat. The arguments against conviction are expected to be persuasive with Senate Republicans, most of whom have signaled that they will vote to acquit.

RELATED: VERIFY: Donald Trump will be the first official impeached and tried for insurrection

The trial is expected to last into the weekend and possibly longer. It will begin midday Tuesday and could go late into some evenings.

What to watch as the trial kicks off:

FIRST, AN EFFORT TO DISMISS

Tuesday’s proceedings will begin with a debate to dismiss the trial before it even begins. Trump’s lawyers have argued the trial is moot now that Trump is out of office, and 45 Senate Republicans have already voted once to move forward with an effort to dismiss the trial on those grounds.

The Senate will debate the constitutionality of the trial for four hours on Tuesday and then hold a vote on whether to dismiss it. The effort to dismiss is expected to fail, allowing arguments in the trial to begin on Wednesday.

Democrats point to the opinion of many legal scholars — including conservatives — who say the trial is valid under the Constitution. They point to an 1876 impeachment trial of a secretary of war who had resigned and note that Trump was impeached before he left office. Trump's lawyers dismiss that precedent and say language in the Constitution is on their side.

The House managers will present their arguments first, beginning Wednesday. Each side will have up to 16 hours, running no more than eight hours per day.

The Democrats are expected to try and take advantage of the senators’ own experiences, tapping into their emotions as they describe in detail — and show on video — what happened as the mob broke through police barriers, injured law enforcement officers, ransacked the Capitol and hunted for lawmakers. The carnage led to five deaths.

The impeachment managers have argued that the mob subverted democracy and that Trump was “singularly” responsible for their actions after months of falsely saying there was widespread fraud in the election. They will appeal to Senate Republicans to vote to convict after most of them criticized Trump in the wake of the riots, with many saying he was responsible for the violence.

There was no widespread fraud in the election. Election officials across the country, and even then-Attorney General William Barr, contradicted Trump's claims, and dozens of legal challenges to the election put forth by Trump and his allies were dismissed.

It appears unlikely, for now, that there will be witnesses at the trial. But the managers can ask for a Senate vote on calling witnesses if they so choose.

Defense arguments are likely to begin Friday. In their main filing with the Senate, Trump’s lawyers made clear that they will not only argue against the trial on process grounds, but also present a full-throated defense of Trump’s actions that day and why they believe he did not incite the riot.

While the Democrats are expected to appeal to the senators' emotions, Trump’s lawyers have signaled they will try and tap into raw partisan anger. They repeatedly go after the Democrats personally in the brief, describing their case as a “selfish attempt by Democratic leadership in the House to prey upon the feelings of horror and confusion” and another example of “Trump derangement syndrome" after four years of trying to drive him out of office.

The lawyers argue that Trump's words “fight like hell” did not mean to literally fight, that the rioters acted on their own accord.

As they were last year, at Trump’s first impeachment trial, senators are expected to listen to every word of the arguments before they cast their votes.

But this trial will look a bit different than the last one due to COVID-19 restrictions. To protect against the virus, senators don't have to be stuck at their desks for the entirety of the trial, and will be allowed to spread out in the upper galleries or watch a video feed in a room just off the chamber.

Five Republican senators voted with Democrats two weeks ago not to dismiss the trial on constitutional grounds. Those senators so far appear the most likely to vote to convict Trump.

The five senators, all of whom have harshly criticized the president's behavior, are Susan Collins of Maine, Ben Sasse of Nebraska, Mitt Romney of Utah, Lisa Murkowski of Alaska and Pat Toomey of Pennsylvania.

Democrats appear to have little chance of persuading 17 Republicans to find Trump guilty, the minimum number that they would need for conviction. But some GOP senators who voted in favor of the effort to dismiss, such as Rob Portman of Ohio and Bill Cassidy of Louisiana, have said they are coming into the trial with an open mind.

Democrats are likely to focus, too, on senators who are retiring in 2022 and will have less to lose politically if they vote to convict. In addition to Toomey and Portman, also retiring are Alabama Sen. Richard Shelby and North Carolina Sen. Richard Burr.