Officials say the absentee ballot process is safe and secure, but if you are concerned, you can always vote in person early or on Election Day. 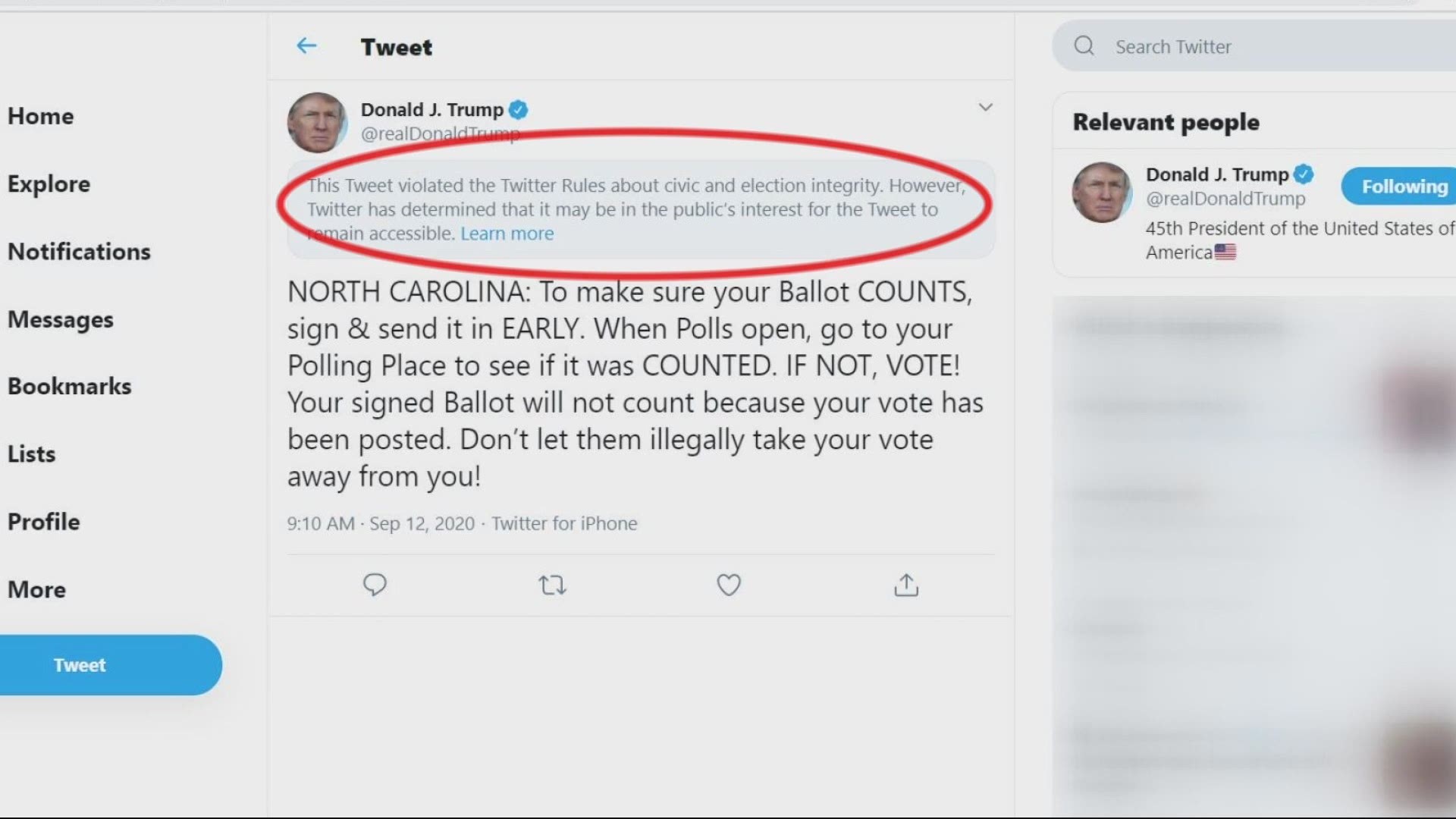 CHARLOTTE, N.C. — North Carolina attorney general Josh Stein is once again warning North Carolinians not to attempt to vote twice after President Donald Trump sent a tweet on Saturday telling North Carolina voters to send in their ballots early and then go to the polls on election day to see if it was counted.

The president's tweet has since been flagged by Twitter for violating its civic and election integrity rules. North Carolina attorney general Josh Stein responded telling people not to do this, as voting twice is a felony.

He said the move would be a waste of time and an unnecessary risk of exposure to the coronavirus.

NORTH CAROLINA: Do NOT do what the President directs. To make sure your ballot COUNTS, sign and send it in EARLY. Then track it ONLINE with BALLOTTRAX. Do NOT vote twice (it’s a felony), or waste your time, or unnecessarily risk exposure to more people. https://t.co/jOKYoR4hnr https://t.co/1cF6tJoHA4

"This is something that we have never had to publicly deal with at this level,” said Michael Bitzer, a political scientist at Catawba College.

"Certainly with the amount of interest and the deep partisanship that divides our state, there are going to be some voters who are genuinely concerned and confused," Bitzer said.

Bitzer said if you send in a completed absentee ballot, that is your vote.

"There is no need to vote by mail and then show up in person early or on election day," Bitzer said.

Now, North Carolinians can check the status of your absentee ballot online via Ballottrax to ensure it's been accepted.

“Typically what tends to happen with rejected ballots, the voter forgot to sign it, the witness information was incorrect, something happened," Bitzer said.

Bitzer said if a ballot was rejected, the voter will be notified.

"County board of elections are required within one business day to respond to a voter whose ballot is not accepted," Bitzer said.

Officials say the absentee ballot process is safe and secure.

In North Carolina, the deadline to request an absentee ballot is Tuesday, October 27. The ballot must be postmarked by Election Day, Tuesday, November 3.

UPDATE: On October 20, a federal appeals court ruled that the State of North Carolina can count absentee ballots that are postmarked by Election Day for upwards of nine days after the election. This was an extension from the previous three-day deadline.

You can also physically drop off your absentee ballot at your elections office or at any early voting site. However, you cannot bring an absentee ballot to a polling place on Election Day.

There remain two options to vote in-person: At any early voting location, or at your locally-assigned polling place on Election Day.