The group Black Girls Ride rode their motorcycles more than 2,600 miles from California to demand legislative change in D.C. 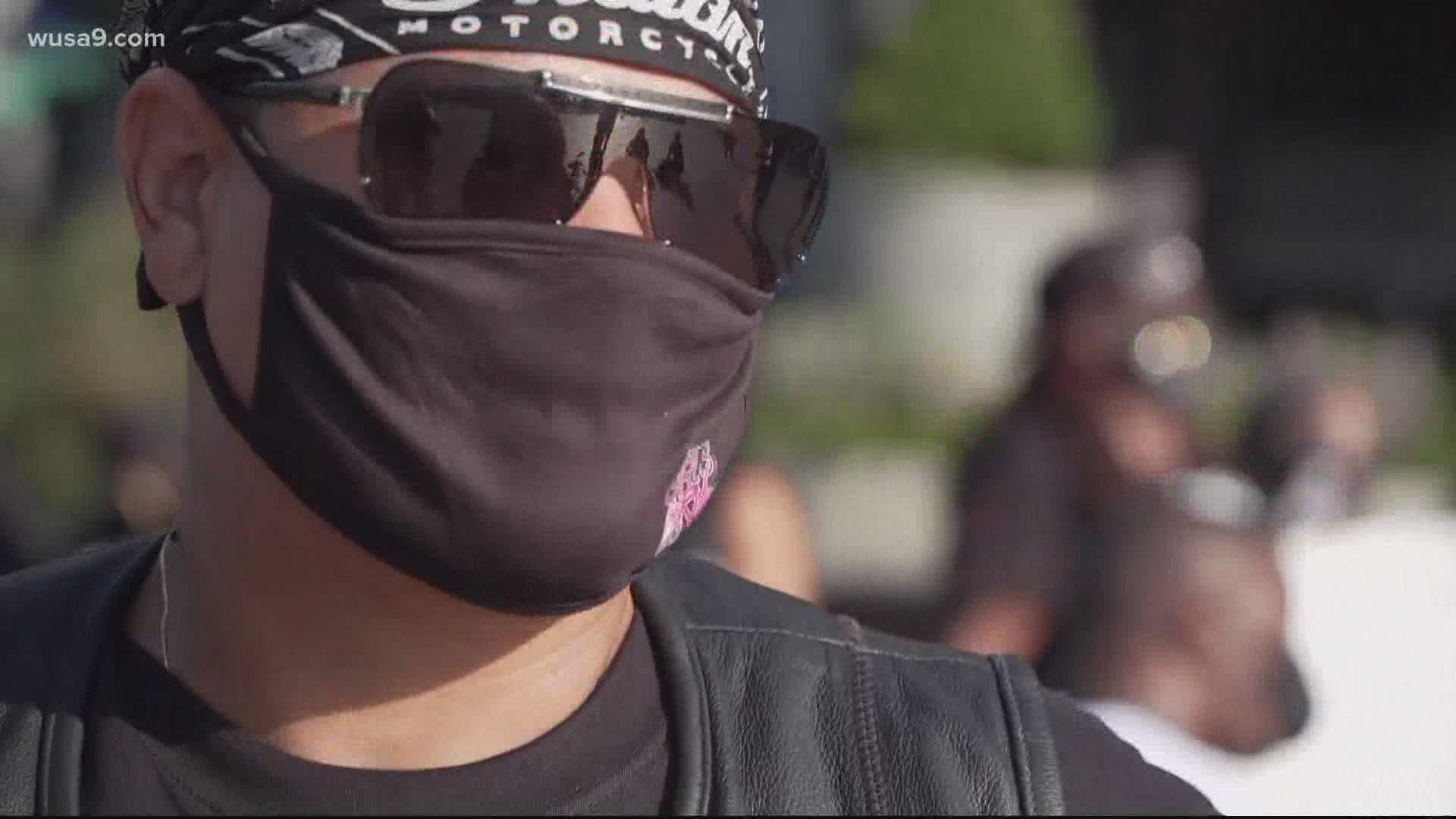 WASHINGTON — After thousands came out to the March on Washington, activists and lawmakers alike are calling for legislative change as the next step.

The magazine and "sisterhood" of female motor sport enthusiasts, Black Girls Ride, rode their motorcycles as far away as California to attend the march.

“We don’t have a lot of control over a lot, but we can control our throttle, and we knew it was time to mount up and be here for this protest," founder Porsche Taylor said.

Taylor started Black Girls Ride in 2011 after leaving her corporate job. In doing research, she said she discovered that Black women were not represented as often in media — and she wanted to change that.

A motorcycle aficionado herself, she decided to build on that family and create a magazine -- "that turned into a movement," said Taylor -- and thousands of subscribers around the world.

After watching George Floyd's death, she felt compelled to act — and join the national call for change in the nation's capital.

Along the more than 2,600-mile ride, Taylor said she couldn't help but think of her nine-year-old nephew and the difficult conversations she's already had to have with him.

"At one point, he’s going to become a man. We’re having to have conversations with him now about how to deal with law enforcement, about how it’s necessary to make them comfortable so you can get home," she said. "Make sure your hands are above your head and visible at all times. Make sure you answer all the questions as politely as possible. Address the officer yes sir no sir ... I’d rather him make the officer feel comfortable than to end up a statistic or a hashtag.”

RELATED: After two kids shot in DC within two days, activists step in to help

We’ll be out and about talking to folks at the #MarchOnWashington2020 about what’s next after the March.@blackgirlsride just got to Freedom Plaza after biking from CA. Their leader is speaking at the March. @wusa9 #equalitymatters pic.twitter.com/joljuH1vU3

Now that the group made it to Washington, Taylor said they're already thinking about how to build on this momentum.

“Protest is only half of the struggle," she said. "Actually voting, serving in these civil capacities, those are the way that we are going to be able to continue the fight that our elders began and effect positive change.”

She said they're pushing for each of their riders to go back into their communities and elect leaders who support police reform and equality for Black people, for women, for anyone who has been marginalized.

“I am 25. And I am Black, and I have been profiled, and I know that these issues are so important because I’ve lived these experiences," Delegate Ivey said. "I need to make sure that my colleagues also understand the magnitude of this moment.”

In the wake of the nationwide protests, Delegate Ivey has been pushing for the Maryland General Assembly to reconvene for a special session on police reform. His tactic — a Twitter campaign he began on June 25, the day Tamir Rice would have turned 18.

It's also exactly one month to the day after Minneapolis Police killed George Floyd.

He has vowed to share one picture and name of someone allegedly impacted by police brutality every day until the Assembly agrees to hold the session.

Day SIXTY-FOUR of my call for a special session of the Maryland General Assembly to address police brutality.

Every day, for as long as it takes, I will highlight the name of a victim of police brutality.

As is stated in the bill itself, "The purpose of the Law Enforcement Officers’ Bill of Rights is to guarantee certain procedural safeguards to law enforcement officers during any investigation or interrogation or subsequent hearing that could lead to disciplinary action, demotion or dismissal."

Del. Ivey said those safeguards end up making it difficult to hold police accountable when they hurt or kill someone.

“If there’s one thing that will change the culture in the police departments is that if they do break the public trust, that they’ll lose their jobs, and it’s not going to take six months for that to happen, it’ll happen swiftly," he said.

He said he hopes those who came out to March Friday — under the same trees that shaded the original marchers back in 1963 — see this demonstration as a first step.

"There’s an urgency this moment requires, and that’s the importance of having the youth lead this movement brings," Del. Ivey said.

Taylor said it's their turn to take up the torch.

"We need to get uncomfortable again," she said.