There are only 20 days until the election. 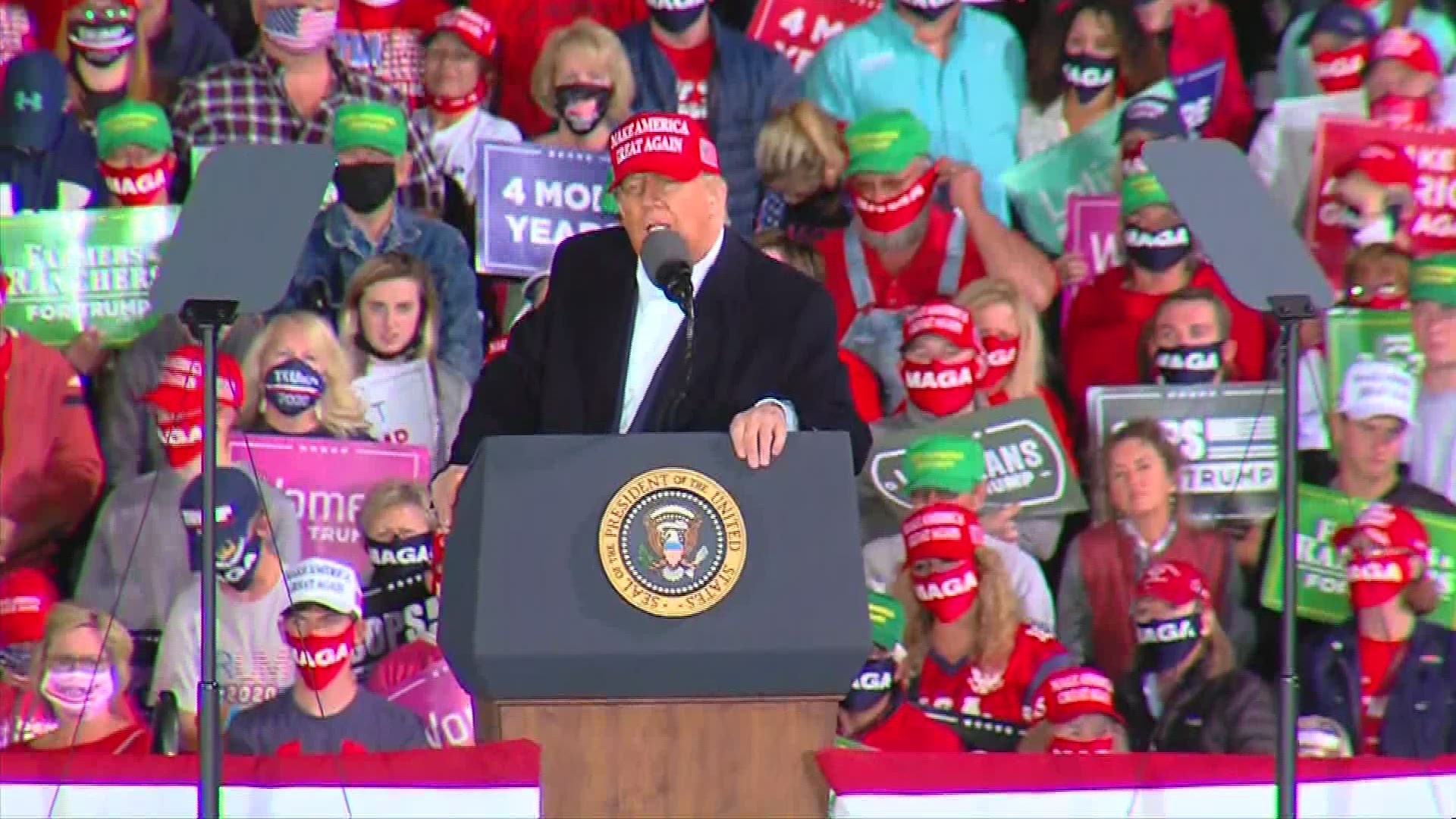 DES MOINES, Iowa — With less than a month until the election, President Donald Trump made a campaign stop Wednesday in Des Moines.

An analysis of polls from FiveThirtyEight has Biden ahead 48.1% to 46.8% in Iowa, with a much tighter race than national polls.

After opening with lengthy remarks about Biden's son, Hunter Biden, and his business involvement in Ukraine, Trump moved on to topics such as ethanol, the coronavirus pandemic and winning Iowa in November.

"This election is a choice between Trump recovery at a level that nobody has ever seen before and a Biden Depression," Trump said. "If they get elected, they're gonna double and triple and quadruple taxes."

"You will have a depression the likes of which this country has never seen before and that probably includes 1929."

No social distancing, limited mask use ahead of Trump rally in Des Moines. pic.twitter.com/AkGvTS8aC7

RELATED: President Trump is holding a rally in Des Moines Wednesday. How safe will it be?

Trump announced earlier in the day he would award the Presidential Medal of Freedom to Iowa wrestling legend Dan Gable.

"I don't know if we'll do it today or shortly thereafter, you're the first person that knows about this. I'm presenting Dan Gable with the Presidential Medal of Freedom, which is, along with the Congressional Medal of Honor the highest award you can get in the United States, the president said. "The highest honor."

"I've coached a lot of athletes over all the years and I tell ya what, when I look at them and I hear them, they kind of remind me of [Trump]," Gable said. "Every one of them you had to mold ... learn a little bit more, they had to get better. And every one of them did, and that's why they were not just one-time champions, and [Trump] is already a one-time champion."

"But because he's open for learning and he's already very competent, he's going to be a multi-champion President of the United States of America."

A billboard across from the airport, paid for by Rural America 2020, criticizes Trump's large, public events following his own COVID-19 diagnosis.

"I didn't love it," Trump said Wednesday night. "But you know, it's a little tough and you have a temperature and you don't feel good. And the scarier part is, where is it going?"

We’re doing our part to warn Iowans that @realdonaldtrump is in town tomorrow. This billboard is directly outside the Des Moines Airport where he will hold his hangar rally. #Superspreader #SuperspreaderTrump #covidiots pic.twitter.com/KtN9SebH4T

During the rally, Trump said the nation's fight against COVID-19 will result in an "even stronger" 2021 compared to 2019.

Biden issued the following statement ahead of Trump's visit:

Iowa has been ravaged by the coronavirus pandemic, with cases surpassing 100,000 this week and COVID-19 hospitalizations hitting a new high. But President Trump isn’t coming to the Hawkeye State to offer words of comfort to those suffering, or a helping hand to the Iowans who are out of a job, or an actual plan to get the virus under control. Instead, he’s here to spread more lies about the pandemic and distract from his record of failure.

That’s not good enough. Iowans whose lives have been thrown into chaos need real leadership — not more division. I’ve seen our country through dark times before, helping rescue an economy in crisis. And I’ve fought for the health care protections this administration is battling in the U.S. Supreme Court to undo. We’re better than this moment under President Trump — and as President, I will bring this country together so that we can build back better.