One of the most anticipated speeches Wednesday night at the Republican National Convention came from Senator Ted Cruz. 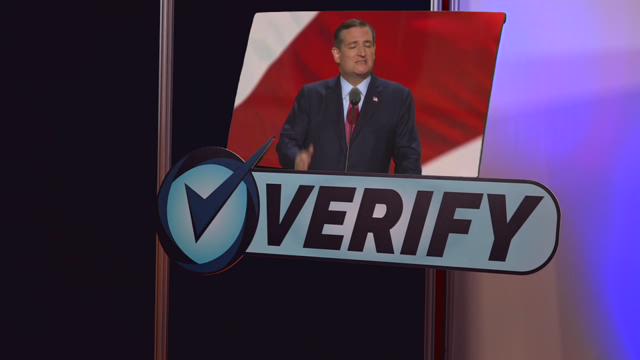 CLEVELAND - One of the most anticipated speeches Wednesday night at the Republican National Convention came from Senator Ted Cruz.

The headline from Cruz's speech: he didn't endorse Donald Trump and he was booed as he walked off the stage.

During his speech, Cruz tried to draw contrast between Republicans and Democrats on how the parties look at terror.

“Theirs [Democrats] is the party that thinks ISIS is a JV team, that responds to the death of Americans in Benghazi by asking 'what difference does it make?'” Cruz said.

The way Cruz used the “what difference does it make” quote is misleading.

He was referencing an answer Hillary Clinton gave during a Senate committee hearing, but she wasn’t saying that the lives lost in Benghazi didn’t matter. She was saying it doesn’t matter what exact event prompted the killers to attack the diplomatic compound.

“With all due respect, the fact is we have four dead Americans. Was it because of a protest or was it because of guys out for a walk one night who decided to go kill some Americans? What difference, at this point, does it make? It is our job to figure out what happened and do everything we can to prevent it from ever happening again," Hillary Clinton said in response to Wisconsin Senator Ron Johnson in January 2013.

Our team of fact checkers are working to verify what’s being said by at both the Republican and Democrat National Conventions.