President Trump's Visit To Greensboro Met With Protests And Supporters

The Triad is getting ready for President Trump’s visit to Greensboro. The 45th President will arrive in town for a fundraiser. 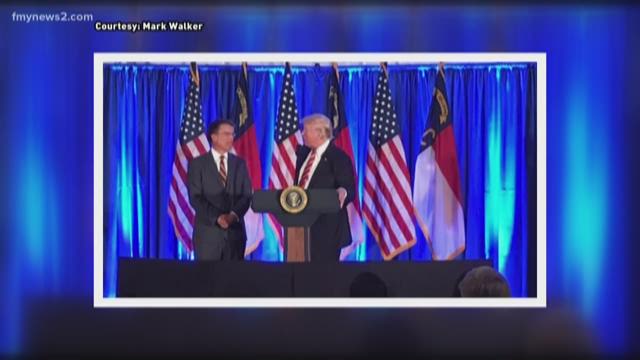 GREENSBORO, N.C. -- For the first time since he was elected, the President of the United States returned to the Triad Saturday night.

Our cameras were there when Air Force One arrived at PTI airport and when Donald Trump's motorcade rolled through the streets of Greensboro.

Trump was visiting for a private fundraiser in the Irving Park neighborhood.

But his arrival was met with a lot of support and also a lot of protest.

Chanting and holding signs, protestors lined the streets of Greensboro waiting for the President's arrival.

"We are out here because Trump is coming down to the city and infecting it with his grossness," said Samuel Woodard.

Demonstrators wanted to send a clear message to Trump.

But just a few blocks away, an even larger crowd of supporters gathered to catch a glimpse of the most powerful man in the world.

After hours of waiting in the rain, the crowd cheered as President Trump's motorcade passed by with heavy police presence.

Trump was on his way to a private fundraiser at the home of Louis Dejoy and his wife Aldona Wos in Greensboro where tickets reportedly started at $2,700 a piece.

In a statement, Walker said the President talked about three main things including infrastructure, tax reform, and continuing the fight to repeal and replace Obamacare.

WFMY News 2 caught up with the Congressman before the event.

"We have had several times to go over to the oval office and work on legislation that we've accomplished and are looking to accomplish this coming year," said Walker. "But having the President of the United States come to our home town, that's a special honor."

Trump came and left without any incidents, but his visit won't be forgotten soon.

"I don't really hate people. I only hate something unless I feel really strongly against it. But I hate Trump," said Woodward.

"He's very patriotic and wants the best for America and I really think he's fighting for all Americans," said Emily, a Trump Supporter.

In total, more than 100 local police officers and sheriff's deputies assisted in the security detail for Trump's visit.

The last time he visited North Carolina was last December in Fayetteville.

Timeline of Trump's visit below:

Here’s a look at what’s happening now for his visit.

7:35 p.m. - Supporters and protesters cheer and chant as president's motorcade rolls through Greensboro.

1 / 15
Air Force One lands at PTI Airport as President Trump arrives in Greensboro for a fundraiser.

#POTUS Trump on the move in #Greensboro headed to fundraiser https://t.co/j0vDxpyE6O pic.twitter.com/BQNgiZycgt

President Trump leaves Air Force One with the umbrella!&nbsp;

6:10 p.m. - Protesters now gathering around the area where the fundraiser will be held tonight for President Trump.

Protesters now starting to assemble on both sides of the house in #Greensboro for @realDonaldTrump fundraiser @WFMY pic.twitter.com/mH8gvtaPwv 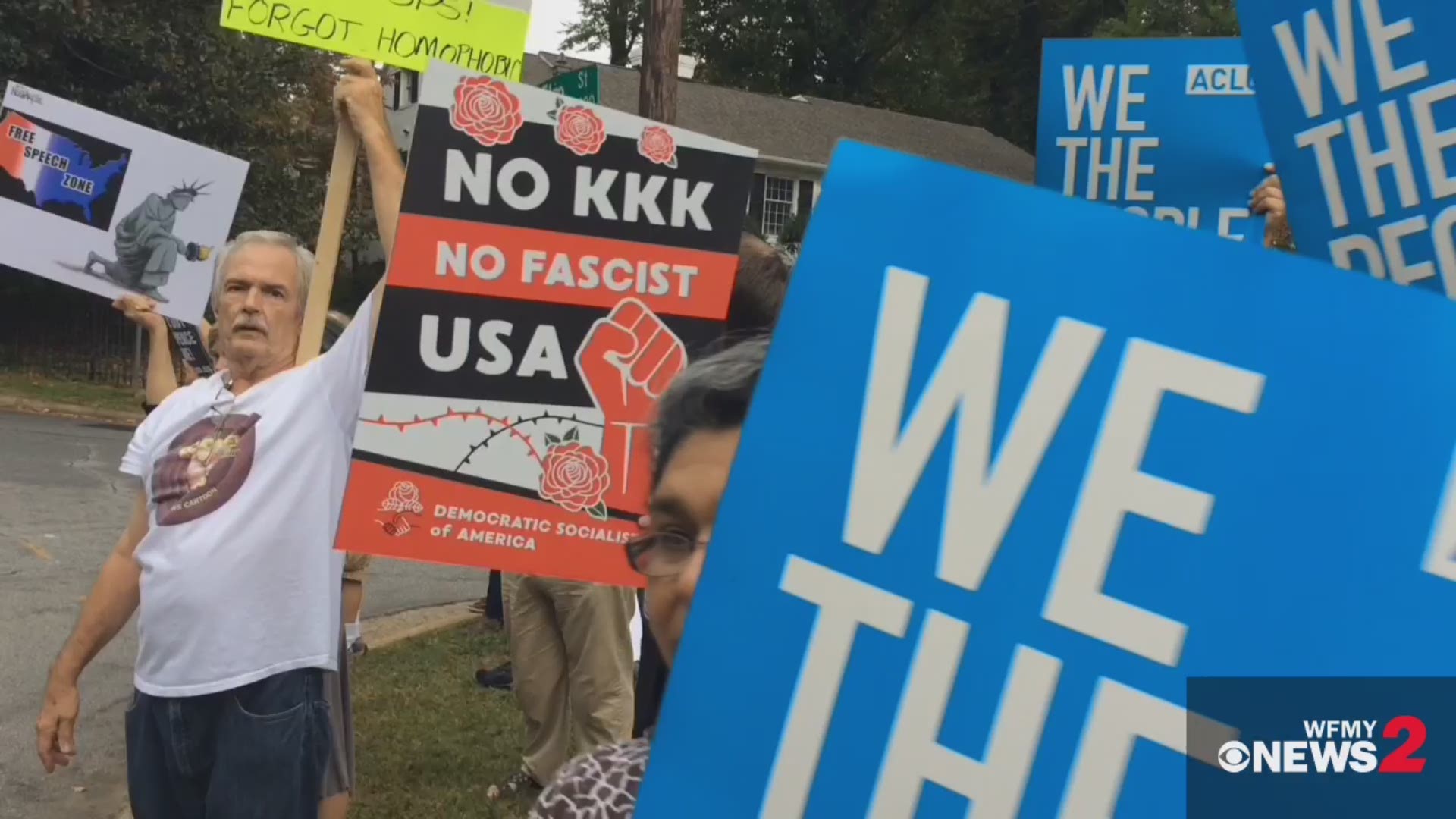 6:05 p.m. - Large group of both supporters and protesters gathering ahead of Trump's visit.

5:45 p.m. - Tweet from President Trump who's NC bound! President Trump tweeted Leaving the White House for the Great State of North Carolina. Big progress being made on many fronts.

Leaving the White House for the Great State of North Carolina. Big progress being made on many fronts!

This man wants supporters of @realDonaldTrump to see the country is in distress at #Greensboro fundraiser. @WFMY pic.twitter.com/lDJksxkI7M

Trump Supporters and Protesters Gather Ahead of President's Arrival

1 / 17
Trump supporters and protesters line the streets ahead of the President's arrival in Greensboro.

5:02 p.m. - Fans excited to for a chance to get to see or even meet President Trump.

Fans of @realDonaldTrump walking up in hopes of seeing the President in #Greensboro @WFMY pic.twitter.com/NPQM1s7BRN

5:00 p.m. - House where fundraiser is being held blocked off by security ahead of President Trump's visit to Greensboro.

House blocked off for @realDonaldTrump fundraiser in #Greensboro #NC pic.twitter.com/Pahrjktu8A

4:55 p.m. - More than a dozen protesters line up along Country Club Drive and Elm Street

4:45 p.m. - Protesters are moved from Bryan Blvd. road as security shuts it down for President Trump's visit. Protesters are now heading to Country Club and Elm Street. 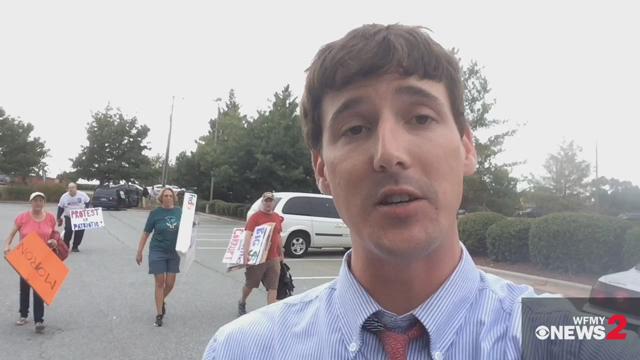 4:30 p.m. - Protesters line up along Byran Blvd. ahead of President Trump's visit.

3:30 p.m. - Security preparations being made at PTI Airport to get ready for Air Force One to land later Saturday night. 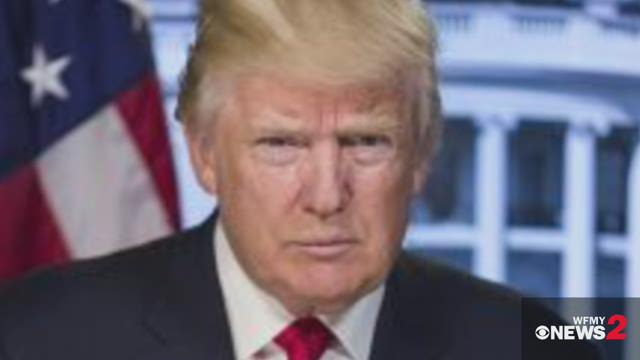