RNC to governor: We're looking to you to set the rules and requirements

In a letter to North Carolina Governor Roy Cooper Thursday, the Republican National Committee is demanding he establish "solid guidelines" ahead of the RNC. 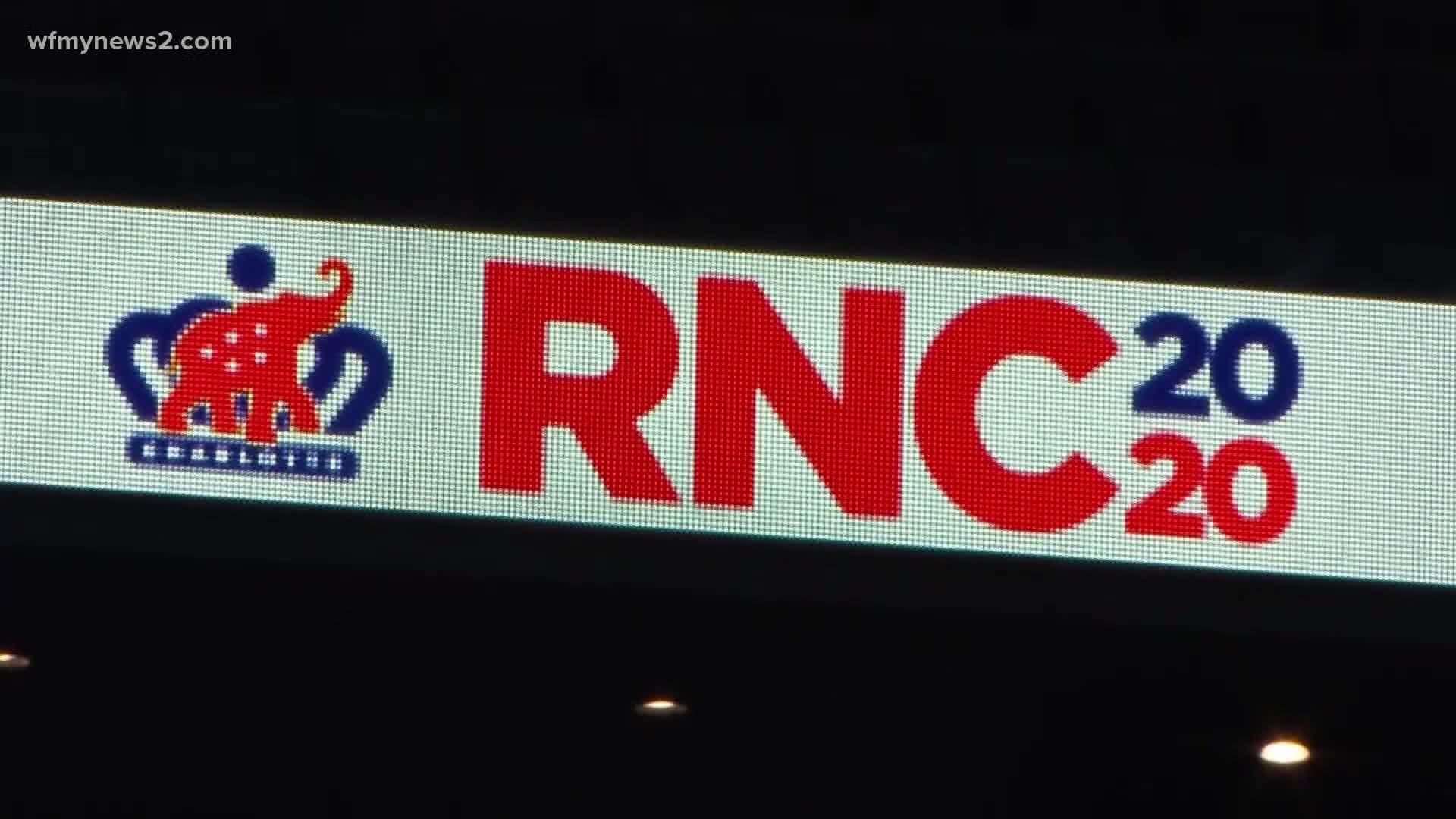 Thursday's letter comes after President Donald Trump sent a series of tweets Monday threatening to relocate the Republican National Convention if the governor's COVID-19 phased reopening plan would not allow full attendance at the event.

In a response to those tweets, Cooper said Tuesday his administration was awaiting proposed, operational guidelines from the Republican National Committee. In their new letter Thursday, the RNC proposes some guidelines while also calling on Cooper to lead the charge.

RELATED: 'Within a week, certainly, we have to know' | President Trump says Gov. Cooper must make a decision on the RNC

"The people who will visit the Charlotte region during the Convention... are looking to you to set the rules and requirements for the RNC to hold a safe, secure event," reads the letter, which was co-signed by Republican National Committee Chairwoman Ronna McDaniel, and Marcia Lee Kelly, the president and CEO of the convention.

"We still do not have solid guidelines from the State and cannot in good faith, ask thousands of visitors to begin paying deposits and making travel plans without knowing the full commitment of the Governor, elected officials and other stakeholders in supporting the Convention," the 3-page letter continues.

The letter included these proposed healthcare safety guidelines from the RNC:

Organizers are stressing the economic boost expected to the Queen City, which like other cities has seen businesses temporarily closed because of coronavirus restrictions.

"Knowing that President Trump and the RNC can provide a much needed and timely stimulus to Charlotte and the entire region has only steeled our resolve to hold an in-person, energetic, five-star event here while also perpetually maintaining safety foremost in mind," the letter said.

Read the full letter from the Republican Nation Committee below

For the third time this week, North Carolina has set a new, daily record for the number of coronavirus hospitalizations.

"We are concerned about the number of hospitalizations for COVID-19 continuing to go up. This is why we're in phase two and not opening everything up," Cooper said during a coronavirus briefing Thursday. "This is why we think we need to stay in Phase 2 for a while to see how these numbers go."

At odds between Cooper and the RNC are the governor's three-phase reopening plan.

The governor and state health officials have not been able to provide a date for when Phase 2 will end. Instead, officials say they are tracking data and will move the state into Phase 3 only when statistics such as hospitalizations allow.

"We are not going to sacrifice the health and safety of North Carolinians. That's the bottom line," Cooper said in response to the president's tweets during a coronavirus news conference Tuesday. "[Republican National Convention organizers] know we are talking about a time that is three months from now."

President Trump says: "We have to know" 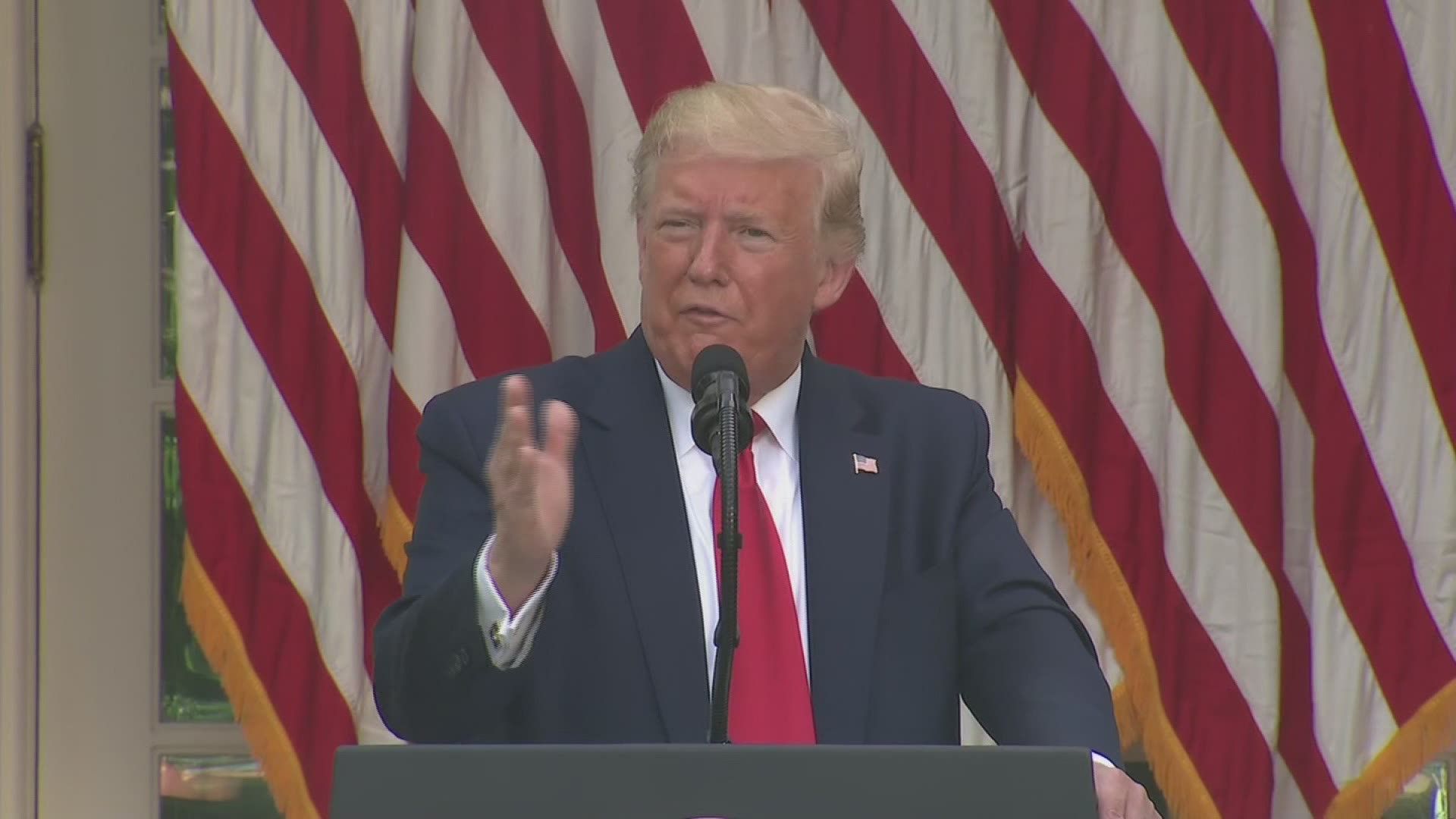 In a press conference Tuesday, President Trump said Cooper has a week to decide.

"We need a fast decision from the governor, he's been acting very, very slowly and very suspiciously," Trump said.

When a reporter followed up asking the timeline he expects, Trump said, "We're talking about a very short period of time. It's a massive expenditure, yeah. I would say within a week, certainly, we have to know."

In their letter Thursday, RNC organizers again pressed hard against the deadline.

"Major investment decisions need to be made in the coming days and to this point we have been operating in good faith," they said. "...clear guidelines from your administration are needed."

Could the RNC be moved out of Charlotte?

After President Trump first tweeted Monday, other locations have been pitched as possible alternatives to host the RNC.

Georgia Governor Brian Kemp said Tuesday he would welcome the RNC to Georgia.

WCNC Charlotte took the Republican National Convention contract with the City of Charlotte to an attorney to explore what would happen if the RNC was moved.

"The contract specifically allows both the city and the county to respond to any public emergency situation or public health situation that may arise in the city," Chris Strianese, the managing partner at Strianese Hucker, LLP in Charlotte, said as he interpreted the contract.

"They are legally required to follow the directives of the state," said Strianese. "Governor Cooper holds the keys to the convention."

Strianese said the convention as its being proposed could only happen if North Carolina had moved out of Phase 3.

If the RNC was held today in Phase 2, only 10 people are allowed to gather together indoors.

If the city broke the contract, it could have to pay back the $50 million security grant it received from the federal government, Strianese said.

Charlotte Mayor Vi Lyles, who was among the intended recipients of Thursday's RNC letter, tweeted earlier in the week:

"With the health and safety of our residents and visitors being the top priority, the city of Charlotte will continue to follow the guidance from Governor Cooper."

At this time, neither the City of Charlotte or Mecklenburg County have their own coronavirus restrictions. They had previously allowed county-level restrictions expire in favor of consolidation rules governed at the state level.

As we have previously discussed, it is our shared goal to host the Republican National Convention in Charlotte and to showcase the Queen City, and all of the Carolinas, to the entire world in August.

The distinction of recently nominating sitting presidents from both major parties speaks to the importance of North Carolina and the region to the entire country. The Convention in August will make history and produce a major economic windfall for your entire state.

Knowing that President Trump and the RNC can provide a much needed and timely stimulus to Charlotte and the entire region has only steeled our resolve to hold an in-person, energetic, five-star event here while also perpetually maintaining safety foremost in mind.

To accomplish the goals we all share, which includes helping North Carolina and the region to regain its economic footing, clear guidelines from your administration are needed. We believe that moving forward requires direction and setting expectations to plan for a major event.

Numerous members of our Convention team and their families moved to North Carolina, they have been planning the RNC Convention for years, we have invested millions of dollars but now we are at a crossroads.

Major investment decisions need to be made in the coming days and to this point we have been operating in good faith.

The people who will visit the Charlotte region during the Convention, as well as the businesses and workers who will benefit are looking to you to set the rules and  requirements for the RNC to hold a safe, secure event.

We still do not have solid guidelines from the State and cannot in good faith, ask thousands of visitors to begin paying deposits and making travel plans without knowing the full commitment of the Governor, elected officials and other stakeholders in supporting the Convention.

A successful convention per RNC rules require delegates, alternates, elected officials, guests and media to be in attendance as President Trump is nominated for a second term.

We are asking for your approval on the following safety protocols:

With your approval on those proposed safety protocols, and in addition to Secret Service requirements, we will then work with all the stakeholders and principals to execute a detailed plan to secure our shared goal of a safe and secure convention.

President Trump and the Republican National Committee want to hold a safe and successful 2020 Republican National Convention in the impressive City of Charlotte and the great State of North Carolina. We are asking for a partner in leadership to make this happen. If there are any additional guidelines to what is cutlined above that we will be expected to meet, you need to let us know by Wednesday, June 3. Time is of the essence.

Chairwoman of the Republican National Committee

President and CEO of the 2020 Republican National Convention, Charlotte

Marcus D. Jones, City Manager for the City of Charlotte