The cash came from a private grant given to the state. 96 county boards of election accepted their share. Rockingham County declined. 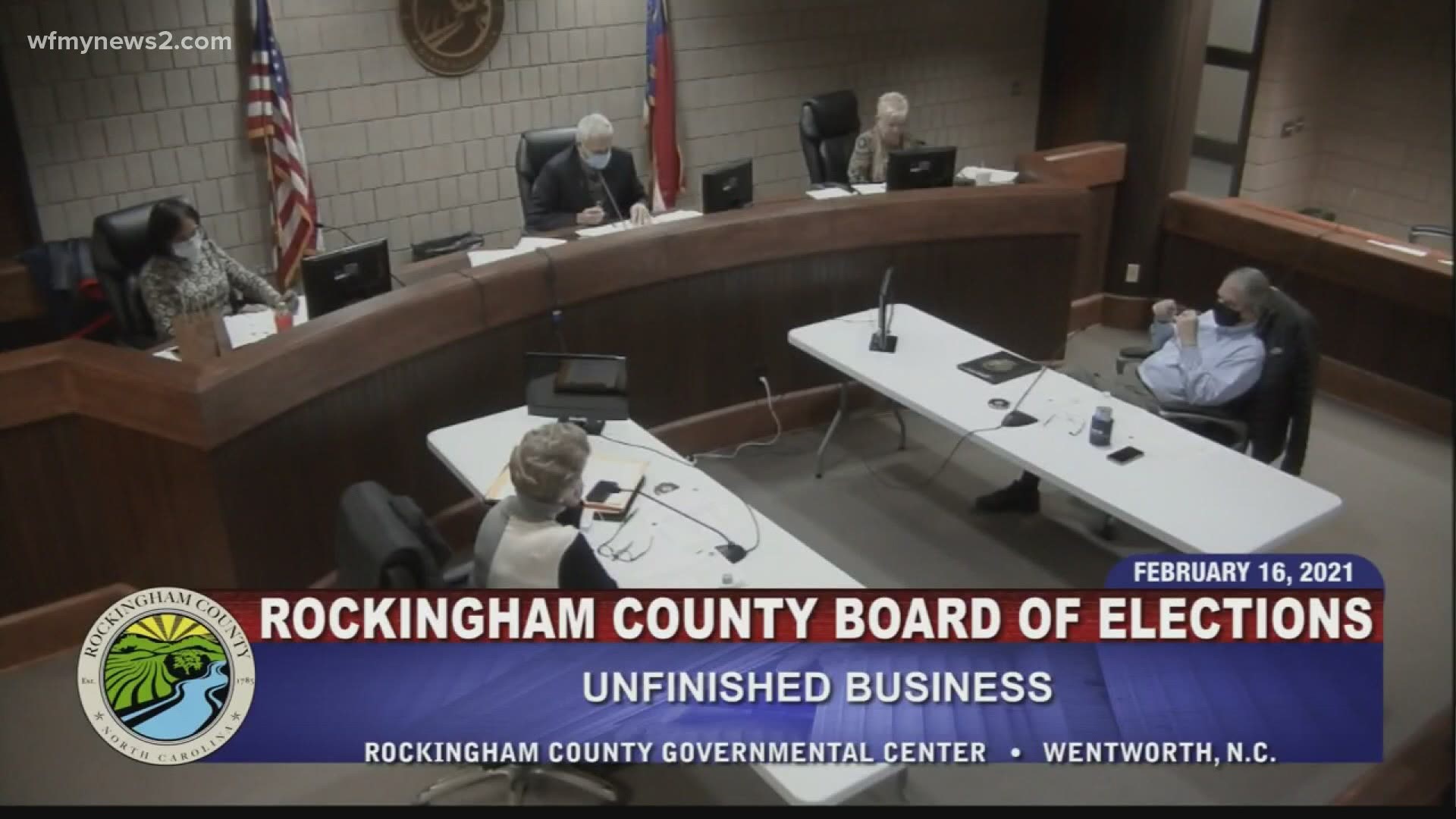 ROCKINGHAM COUNTY, N.C. — The 2020 election was unlike anything we've seen before. Americans buckled in for a battle at the polls in the middle of a once-in-a-century pandemic. Despite the public health concerns, poll workers showed up to their precincts, and voters turned out in force.

Dozens of workers, in counties all over the state, make these sites possible. When the Rockingham County Board of Elections had a chance to give a small cash bonus to some of their workers, they declined.

In 2020, poll workers faced a risk they hadn't seen before, the possibility of coming down with COVID-19.

In Rockingham County, the risk became real. A one-stop early voting site in Reidsville had to shut down after three workers tested positive for coronavirus. The site did not reopen until a Court ordered it to do so.

One of those Reidsville workers who tested positive spoke to WFMY News 2.

"It lasted a couple weeks, but you know for me, it was just a really bad flu," said Cathy Beeson, "I was very fortunate with it."

"Everybody got really upset and worried about the situation," Wilson said, "Everybody there has kids and family and all."

Boards of Election across North Carolina provided pay bumps for their workers, because they were exposed to a once-in-a-century risk.

Many one-stop workers in North Carolina got bonuses too, but not in Rockingham County.

The North Carolina State Board of Elections received a private grant from the Center for Tech and Civic Life. The group raised more than $250 million to provide grants to any states who wanted one. North Carolina applied and received $2.2 million.

The grant required that funds only be used to provide bonuses for one-stop early voting workers. If not, the boards of election could send the money back to the grantor.

The NC State Board of Elections dispersed the $2.2 million grant to its 100 county boards of election. 96 counties accepted their share. Two counties didn't provide a response. Two counties declined.

Rockingham County was one of them.

The RCBOE got a check for $8,078.28. The County finance department crunched the numbers and determined it was enough to give each one-stop worker a $13.65 bonus per day they worked.

Some workers would only make a few bucks, but the maximum amount one worker could make was $218.40.

The RCBOE brought up the issue at their regular meeting on February 16. After several minutes of discussion, the Board voted 3-2 to send the money back, denying one-stop workers their bonuses.

The only explanation given by the three who voted to deny the bonuses:

"There are other employees that have spent many more hours working diligently during COVID such as EMS," said Reece, "I do not think that they got a bonus pay."

To be clear, any pay increases or bonuses for other County workers would have to be approved by their departments or the County Commission. The RCBOE did not have the option to give the money to the County for other employees or use the money for any other purposes.

WFMY News 2 sent multiple emails and phone calls to the members who voted against the bonus pay. They never responded.

"Why did we not accept that money to pay our people," said former RCBOE chairman Royce Richardson, "We got some great, great workers that work the polls. It was a difficult, difficult election with the COVID and all that we had to deal with. I hope they come back and work again."

Richardson was one of two RCBOE members who voted to keep the money. About a month after the February vote, Richardson sent his letter of resignation to the State Board of Elections.

"I think it was a lot of politics involved. It got to the point that we were not getting anything done," Richardson said, "I said maybe I need to get out of the way and let somebody else do it."

The SBOE appointed Ophelia Wright to Richardson's position a few weeks later. She's a Rockingham County native who spent decades on the school board. She's also the first African American woman to hold the post.

Richardson served on the RCBOE for nine years. He was the chairman for two.

Nelson Cole was the other RCBOE member who voted to keep the bonuses. He declined an interview, but said multiple times on the phone that he didn't understand the final decision.

Beeson and Wilson, two of the one-stop workers at the Reidsville site that closed due to coronavirus, said the decision didn't make sense.

"We were out putting our lives on the line and going back home to our families and all," Wilson said, "There's no reason why we shouldn't have gotten it."

"I was really stunned," Beeson said, "You know that's not a huge amount (of money) but it would've been welcome by everyone."

Frank Wilson continued, "I'm really hurt about it...I've been doing this for nine years and I've enjoyed it."

Beeson went on to say, "I just can't figure out why they (the Board) behaved in that manner, I really, really can't."

WFMY News 2 spoke to dozens of other one-stop workers. Many declined interview requests, fearing the RCBOE would retaliate and refuse to let them work in the next election.

Workers said things like: "it's absolutely ridiculous", "it was the worst election I ever worked", "it's not much, but it's the principle", "I'm disappointed to hear that", "many people that worked would have deserved it", "if I work again, they'll hear from me about that bonehead decision."

Two women stood up to criticize the RCBOE's decision during a public comment period in March. Ann Brady has worked for Rockingham County Schools for years. She also ran for County Commissioner multiple times. Rochelle Tucker works for the City of Reidsville. She also attends church with Frank Wilson, one of the one-stop workers.

In the March RCBOE public comment period, Brady said, "We didn't turn down state money. We turned down private money."

Tucker said to the Board, "I believe your vote to deny those people is certainly a slap in the face to them and after all the risk they took to serve this county."

Brady and Tucker discussed their comments with WFMY News 2 in separate interviews.

Brady went on to say, "It is very frustrating to me that these hard working people that don't make a lot of money anyway that work diligently, that we would turn down giving $13.65 a day to each of them to thank them for the hard work that they did in a COVID pandemic."

Tucker went on to say, "If you have an opportunity to stuff a few dollars in somebody's pocket, what is the harm in that? I'm not even going to try to come up with a reason for why they didn't (approve the bonuses) because I just don't know one that makes good sense."

The money is gone. The RCBOE can't get it back even if they tried.

The North Carolina State Board of Elections will officially appoint county boards of election members in its counties on June 29.

The Rockingham County Democratic Party says they expect to keep Ophelia Wright on as the RCBOE chair. They plan to nominate Nelson Cole to keep his seat, but they do not plan to reappoint Leanna Lawson, the democrat who voted to deny the one-stop worker bonuses.

The Rockingham County Republican Party hasn't said whether they will bring back Bonnie Purgason and Toni Reece.

The Rockingham County one-stop workers who spoke to WFMY News 2 were all upset by the Board's decision, but they had similar, positive outlooks on the future. For them, working the polls has never been about the money. They truly love the job. Despite any disrespect or disagreeable decisions, many say they want to come back to work, and they'll be there when the next election comes around, pandemic or not.