Research now points to smartphones-driven social media as one of the biggest drivers of stress. 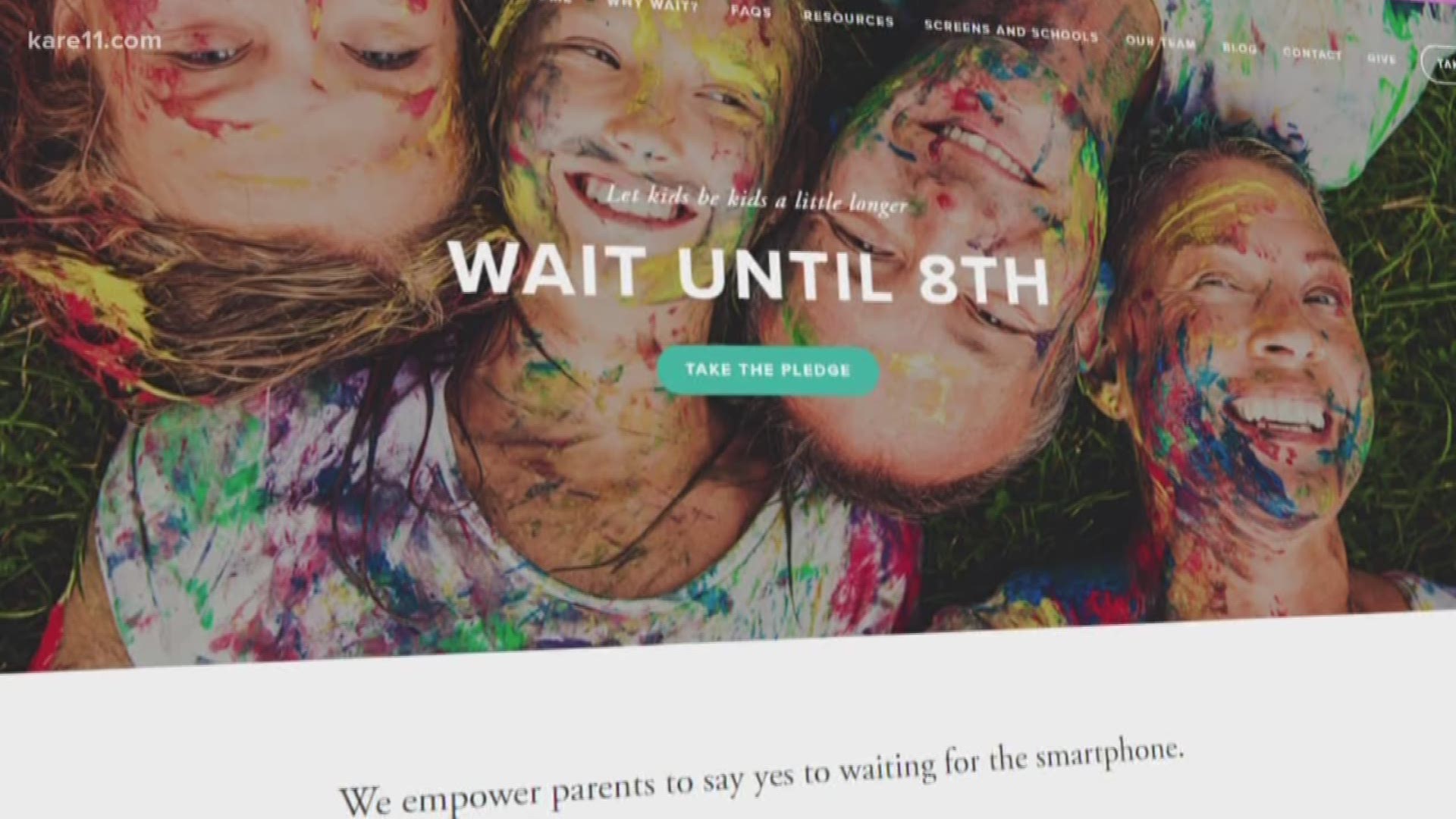 BUFFALO, N.Y. — High school biology teacher Kelly Chavis knew smartphones were a distraction in her class. But not even her students realized the psychological toll of their devices until an in-class experiment that, of course, was then spreading on social media.

For one class period, students used a whiteboard to tally, in real time, every Snapchat, Instagram, text, call or other notification that popped up. Students were told not to respond to avoid generating replies ... and further notifications.

Teachers around the country have run similar experiments, typically recording dozens of trips to the board.

RELATED: 20,000 sign pledge to not give kids smartphones until 8th grade

"One girl, just during the one hour, got close to 150 Snapchat notifications. 150!" marveled Chavis, who teaches honors-level courses at Rock Hill Schools in South Carolina.

She's among a growing number of teachers, parents, medical professionals and researchers convinced that smartphones are now playing a major role in accelerating student anxiety — a trend so pervasive that a National Education Association newsletter labelled anxiety a "mental health tsunami."

Testing, extracurricular-packed schedules, and perpetual stressors like poverty can all weigh on students. But research now points to smartphones-driven social media as one of the biggest drivers of stress. After all, that's where college acceptance letters fill Instagram, everyone knows where everyone else is going for spring break, and athletic failures and awkward social moments can live forever.

Jean Twenge, a psychology professor at San Diego State who has studied the issue, said it's no coincidence that youth mental health issues have risen with the number of phones. "What a lot of teens told me is that social media and their phones feel mandatory," she said, leading to a loss of sleep and face-to-face interactions necessary for their mental well-being.

Last year, an editorial in the American Academy of Pediatrics' flagship journal recommended that doctors ask adolescent patients about their social media use as part of routine screening, alongside older questions about home life and drug and sexual activity. "Aberrant and/or excessive social media usage may contribute to the development of mental health disturbance in at-risk teenagers, such as feelings of isolation, depressive symptoms, and anxiety," three researchers wrote in the journal Pediatrics.

Researchers are still arguing whether phones drive student depression or depression drives phone use. But 70 percent of teens view anxiety and depression as major problems among their peers , according to a February Pew Research Center report. Nearly 60 percent of parents said they worry about the influence of social media on their child's physical and mental health in the American Psychological Association's 2017 Stress in America survey .

Schools are starting to react. Many districts now hire outside companies to monitor students' social media postings for signs of distress. Others invite in yoga instructors and comfort dogs to teach even the youngest kids to keep technology from putting them on edge.

Belfast Area High School in Maine even staged an #unplugged event day in April — but it served to underline the technology's pull when less than 20 percent of students and staff took part.

Meanwhile, students and parents are filling school auditoriums for screenings of documentaries such as "LIKE " and "Angst ," which explore social media, technology and anxiety. Movements like Away for the Day and Wait Until 8thdiscourage cellphones in middle school.

When she first got a smartphone around seventh grade, all the posting, messaging and liking pushed Nia Coates' anxiety level to "probably a 10," she said. Now a high school junior, the Buffalo, New York, teen has figured out to manage the distractions.

She'll completely log out of her Snapchat, Instagram and Twitter, and sometimes will delete an app altogether for a while. "The older I've gotten, the more I realize it doesn't really matter so it's not as stressful," Coates said, recalling how in the past she'd post something only to delete it to avoid being judged.

Anxiety has taken over as the most significant obstacle to learning among Chris Doyle's high school students at Avon Old Farms School in Connecticut. Some rack up absences because they feel overwhelmed by the day ahead, Doyle said. A teacher for 30 years, he has seen a profound shift toward constant self-evaluation that he associates with social media, YouTube, and even school grade portals sometimes checked dozens of times a day — things students have never before had to manage.

"That kind of awareness of other people's lives, even maybe what used to be considered other people's private lives, is kind of hyper right now," Doyle said. "And I don't think that usually leaves most people feeling good, because nobody's perfect and most kids feel very imperfect."

But putting the genie back in the bottle isn't easy. In Illinois, Glenbrook High Schools District 225 experimented with limiting teens' access to their grades on a digital portal. But for every student who said the grade book caused them anxiety, there was another who said losing regular access created even more stress, said instructional innovation director Ryan Bretag.

Some students simply appear overwhelmed by nonstop social-media notifications during the school day. "It becomes an anxiety — 'well, if I don't answer them back right now I'm missing something,'" said Troy, Missouri, high school teacher Elizabeth Utterback. Freshmen are particularly susceptible, she said. Her own class tallying experiment netted 80 notifications among 20 students in less than 30 minutes.

"I definitely feel stress with online profiles, social media, to keep up, maintain my profiles and stuff," said Emily Mogavero, a 17-year-old student in Buffalo, New York. "It kind of worries me that I'm on my phone so much." Mogavero said she sometimes puts her phone out of reach or powers it down so she doesn't hear notifications.

Last fall, Seattle Public Schools last fall began testing a toll-free hotline to help middle- and high-school administrators deal with social media stressors like harassment. Other districts have hired companies like Geo Listening, Bark or Social Sentinel that use algorithms to monitor their students' public social media posts. Administrators can then intervene if they see a student's mental well-being deteriorating.

Fayette County schools in Kentucky say in the first three months of monitoring this year, it helped prevent a suicide and led to help for a second troubled young person who had posted references to past school shootings and bullying.

Western New York yoga instructor Erin Schifferli says the demand is high for her "Teen Yoga for Stress Relief" sessions. Her 12-year-old daughter, Aeva, won't get a phone until she's 16, she said.

Setting such limits at earlier ages might help. Deirdre Birmingham of Montclair, New Jersey, signed onto a campaign called "Wait Until Eighth" because she didn't think her video game-loving 10-year-old son was ready to manage a smartphone's pull.

The idea, which got its start in Texas two years ago, is to lessen the peer pressure of being the only kid without a phone by enlisting parents of classmates to agree to hold off until at least eighth grade. So far, almost 20,000 people have signed on, founder Brooke Shannon said.

"I had a gut level that it would be difficult for my child to manage," Birmingham said. "As a grown-up, I find it difficult sometimes to manage."