VERIFY: This ‘mystery’ bug is a velvet ant…and it’s not an ant at all

A WFMY viewer asked us to VERIFY the identity of this ant-like bug. Turns out, it’s a wasp dubbed the ‘cow killer.’ 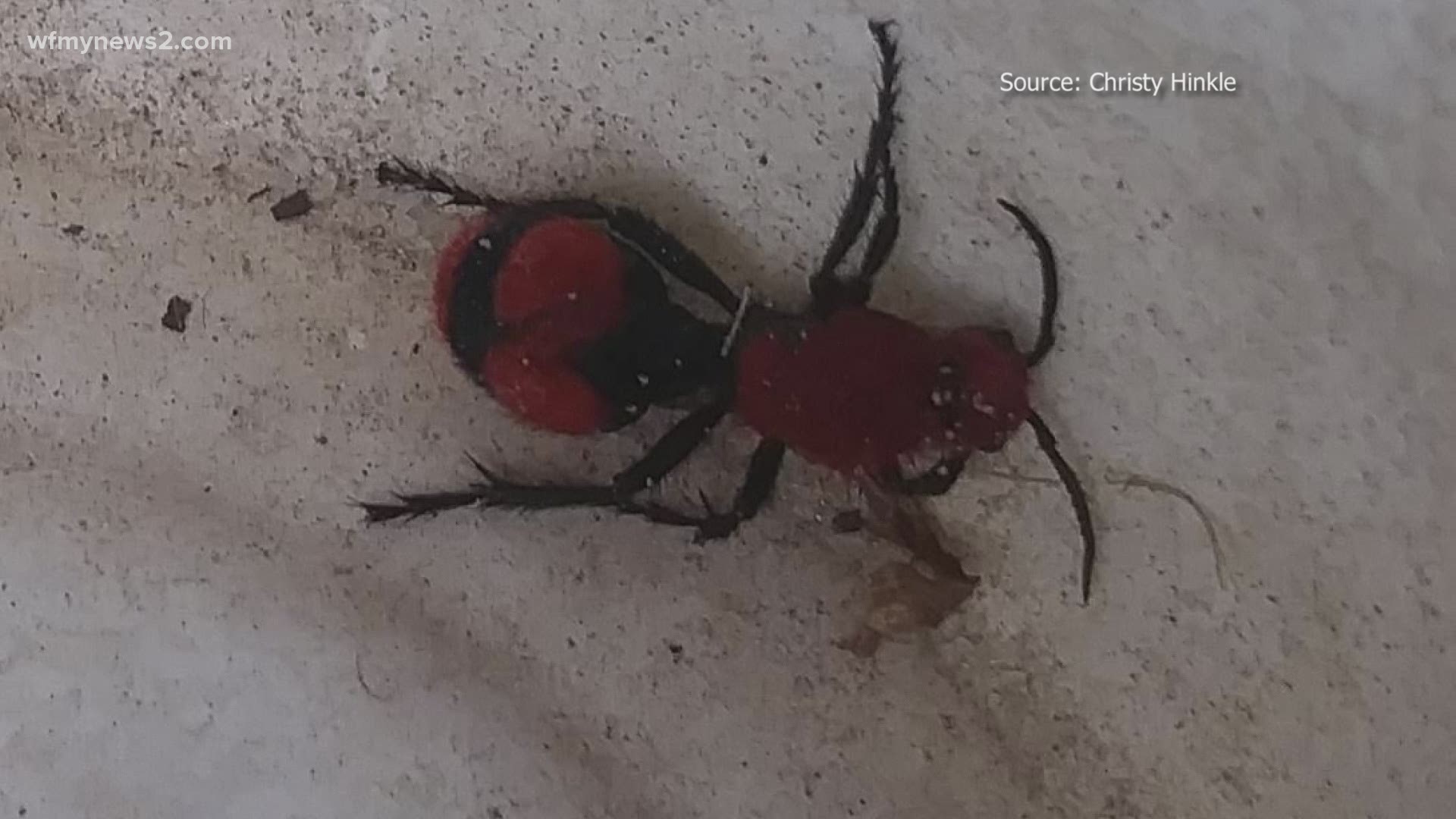 ALAMANCE COUNTY, N.C. — Is there something bugging you about this time of year? It seems as soon as cool air arrives, insects try to make themselves comfortable in your home.

Good Morning Show viewer Christy Hinkle e-mailed WFMY News 2's Meghann Mollerus with a skin-crawling picture of a mystery insect. She said she spotted it outside of her Alamance County home and someone told her it was a queen ant. She wasn't convinced and asked for verification.

Credit: Christy Hinkle - WFMY viewer
A WFMY viewer saw this bug outside of her house in Alamance County, NC and wondered its identity.

Pest control expert Frank Fowler said, "It was actually a picture of a velvet ant, and it's not an ant, at all. It's very interesting. It's a wasp, and this wasp has no wings. They belong to a family called mutillidae, which kind of sounds like mutant."

This mutant wasp is intimidating in appearance. The NC State Extension explained it has an ant-like aura and a furry red-and-black coat. Even though the male velvet ants have wings, female velvet ants do not. They also have stingers, which can inflict a painful sting. That is why they are nicknamed 'cow killers,' because folklore described the sting as so painful, it could kill a cow.

Fortunately, Fowler said, "They're not aggressive. You would have to make that animal sting you."

Per the Extension, velvet ants are native to Eastern North America, which is why Hinkle found the female velvet ant at her home in Alamance County, NC.

Fowler said velvet ants are land-dwelling, which is why they're often on sidewalks, parking lots or fields.

"We see them a lot this time of year -- late-summer, early fall," Fowler said, but generally, they aren't that common.

RELATED: VERIFY: This Big-Eyed Bug Is A Click Beetle

RELATED: VERIFY: It’s A Weevil, Not A Flying Tick

Velvet ants feed on larvae and thus can harm pollination and pest management.

The mystery bug in Hinkle's picture is a velvet ant. If she leaves it alone, it should scurry on its way.

RELATED: VERIFY: This Is Not A Kissing Bug, But Should You Worry?

Do you have a VERIFY inquiry? Submit it to Meghann Mollerus via: