The look every groom has as he waits to get the 'first look' at his bride is a thing of beauty in and of itself.

It's the exact look on Andrew Wright's face as he was eagerly anticipating his first look at his bride.

However, the vision of loveliness that greeted him was bearded and much more muscular than he remembered.

That's because it was his best man, Kye Stachowski, 24, was wearing a wedding dress and had grabbed a sunflower bouquet. It was all at the bride's request. Nicole Smith, 24, had seen the idea on Imgur, an online image sharing community, and wanted to try it at her own wedding at Abram Farm in Spencer, Indiana.

The 25-year-old Wright did have some forewarning — Smith had shown him the Imgur post, but he was confident she wouldn't be able to trick him so easily.

And he had enough to worry about on his big day.

"I was still with the girls, and he was frustrated because his best man had disappeared," photographer Belinda Russell said. "He thought things were falling apart."

When he saw the big reveal, Wright was initially confused.

Why was there a stubbled chin where Nicole's eyes should've been?

"My first reaction to seeing Kye was complete confusion," he said. "For a solid second, my brain was processing what was going on."

But then he couldn't suppress his giggles. 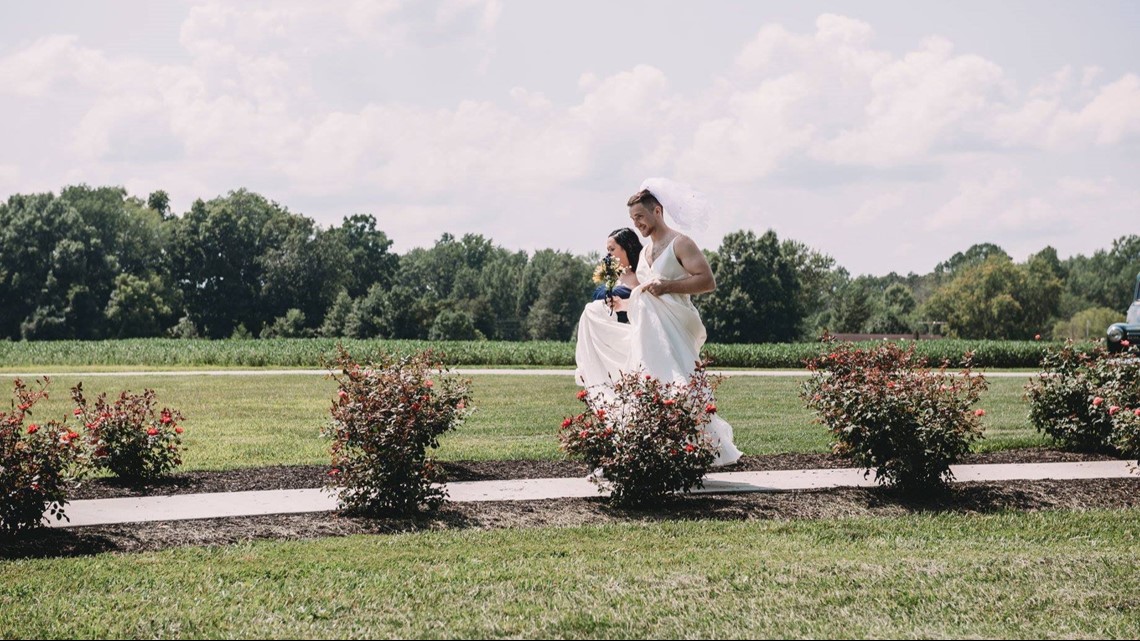 Stachowski, Russell said, was a macho guy. Which made the wedding dress stunt all the more hilarious.

"He was all in," Russell said. "When the bride brought it up, he thought he'd be wearing the actual wedding dress, and she was like, 'Nope, you've gotta borrow one.'"

That was no obstacle for Stachowski, who, with the bridesmaids' help, slipped into matron of honor Malissa Duncan's wedding dress.

"That was the first time I'd worn a dress," Stachowski said. "But I wanted to do it."

ut he couldn't find pair of high heels in his size — though he would have happily worn them.

"No one had high heels that fit, sadly," he said. "So I had slacks and dress shoes on underneath."

The gender-bending deception wasn't a stunt months in the making — Russell said Smith only decided to go forward with it at the end of July.

"We really wanted to have a fun and relaxing wedding," she said. "I sent the Imgur post to Kye, and he was ecstatic to do it."

Wright and Smith began dating in 2008 when they were both students at Plainfield High School. The 13-year-olds met in 8th-grade algebra class. They followed one another to Purdue University, where Wright studied physics and Smith studied natural resources and environmental science. Both graduated in 2016.

They got engaged in May 2016, and after waiting a year for Wright to earn a master's degree in medical physics from Purdue, moved to Germany in 2017, where Wright is earning a doctorate in molecular neuroscience at the Max Planck Institute, and Smith is studying for a master's degree in applied environmental geoscience at the University of Tubingen.

Stachowski met Wright six years ago during his freshman year at Purdue, when they lived on the same floor in Wiley Hall. He's now a graduate student at Ohio State University.

"They definitely have a bromance," Russell said.