VIDEO: Up close and personal with two 'dancing' Timber Rattlesnakes

The snakes are reclusive and rarely spotted, but one man was 'lucky' enough to spot two doing a 'dance' in Frozen Head State Park. 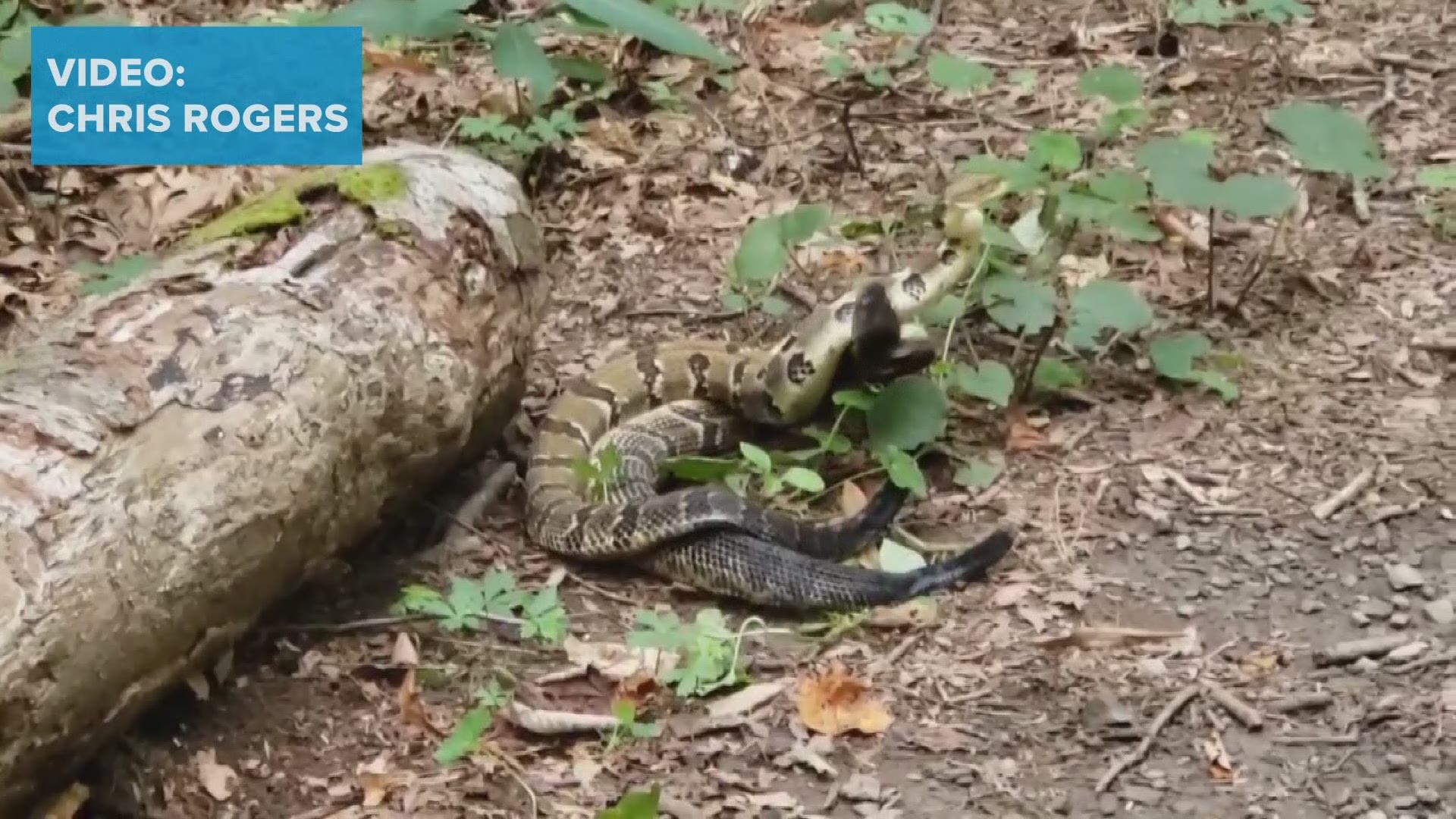 WARTBURG, Tenn. — Why'd it have to be snakes?

For those fascinated with one of Tennessee's most reclusive and dangerous snakes, here's a look at nature that's inherently fascinating.

The two snakes were tangled up and 'dancing' next to a log. You can watch the full video below:

So... are they mating or fighting? At first it was a bit unclear, but herpetologist Phil Colcouch with Zoo Knoxville shed some light-- saying these were two male snakes wrestling with each other.

Male Timber Rattlesnakes will tangle up like this and engage in a 'dance' for dominance over territory and mating rights -- and once they begin fighting, they tune everything else out.

"Rattlesnakes are really secretive animals, let alone in combat, but once you're there and seeing it as obvious in this video, they're pretty oblivious to the world around them. They are laser-focused on that combat," he said.

►Summer snakes: Backyard snakes won't hurt you, but be careful in the mountains

Timber Rattlesnakes are one of two venomous snakes found in East Tennessee -- the other being the Copperhead.

While they are dangerous and have a potent bite, Timber Rattlesnakes are reclusive and shy. They typically hang out in the foothills and mountains, and if you happen to spot one they will likely be coiled up near fallen logs or sunning on rocks.

It's coloration is highly variable, but the TWRA said it's often a shade of gray with a black tail. It has distinct black chevron-shaped crossbands down its body and of course carries the characteristic rattle.

That rattle serves as your warning to stay far away should you catch one's attention. They are Tennessee's most dangerous venomous snake, and are also one of the most dangerous snakes in the U.S.

Here's something unexpectedly cute about them, though: Timber Rattlesnake siblings are very close. According to the Saint Louis Zoo -- siblings are very social and can recognize each other even if they are separated at birth. They have also been known to cuddle up with each other.

RELATED: It's baby critter season! Here's what to do if you find one

RELATED: Copperhead or corn snake? How to tell if that snake you're staring down is venomous

Should you come across a Timber Rattler, or any snake for that matter, you should not try to wrangle or kill one. Just keep your distance.

The TWRA said all native Tennessee snakes are protected by state law, so it's illegal to try and harm them in most situations.

Snakes are all over, and if you see a snake in your yard and want to know what it is, there's an app for that.

"SnakeSnap!" lets you submit a picture and location of where you found your snake.

They'll then send you a text of what it is.

It's still in beta testing, but you can download it in your phone's app store.