UNCG is coming off the NCAA Tournament appearance and its second in the past three tournaments led by coach Wes Miller. 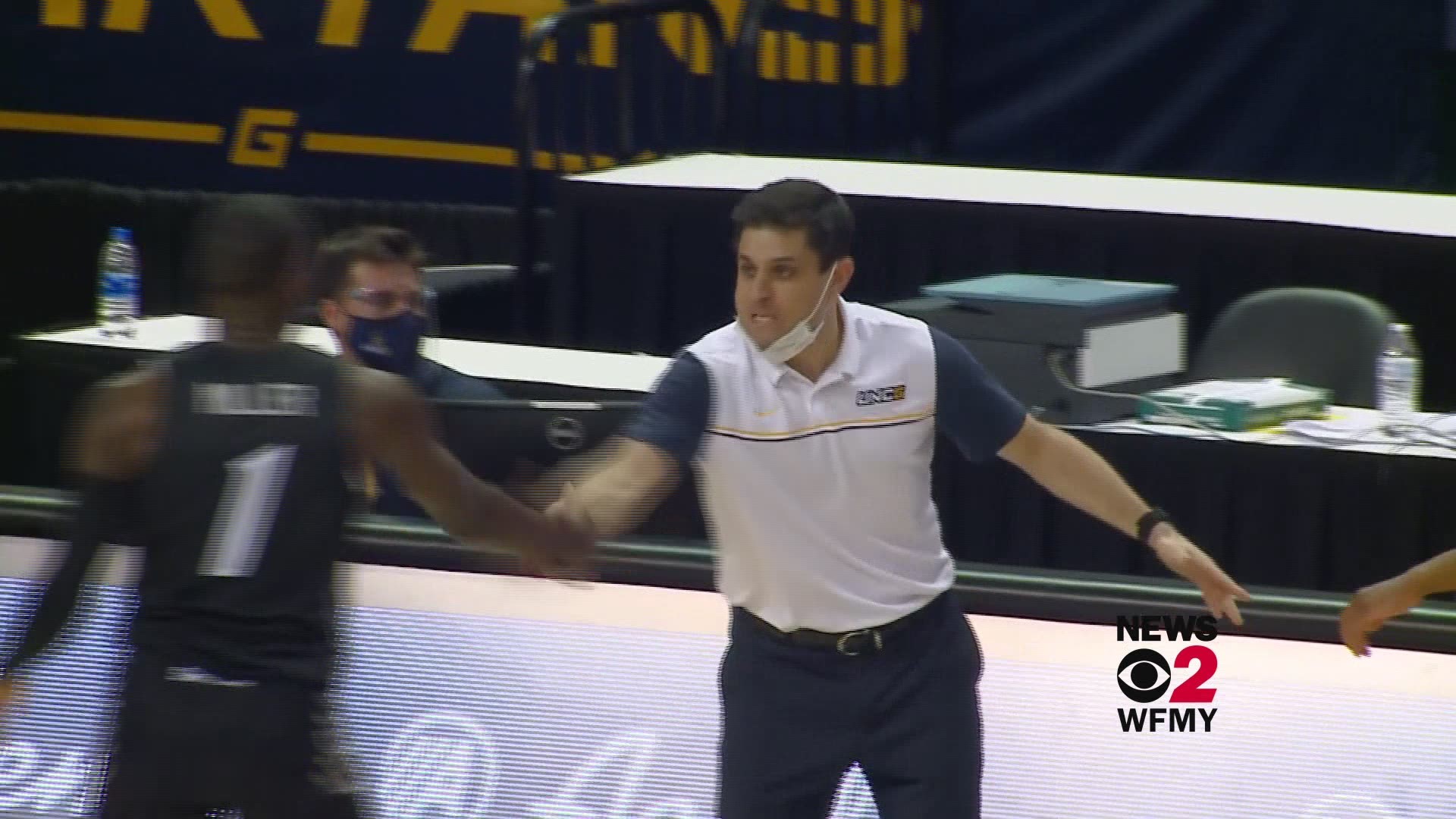 GREENSBORO, N.C. — The University of Cincinnati has hired UNC Greensboro men’s basketball coach, Wes Miller, according to the Director of Athletics John Cunningham.

Miller was recently a finalist at UNC-Chapel Hill for the men’s basketball head coaching job after Roy Williams announced his retirement.

Cincinnati will introduce Miller on Friday during a news conference.

"I am incredibly excited to welcome Wes into the Bearcats family," Cunningham said. "He is an extremely dynamic coach and mentor who impressed me with his drive, focus and attention to detail. He's a proven winner as a head coach and was able to rebuild a program and lead a remarkable turnaround at UNCG over the last decade. We cast a very wide net in this search and Wes emerged as the right coach to lead the Bearcats into the future."

Miller also, had much to say while thanking the UNCG family for their support over the years.

"I'm absolutely thrilled to be the head coach at the University of Cincinnati," Miller said. "I'm thankful for President Pinto and (AD) John Cunningham for bringing me into the Bearcats family. I am honored to lead such a storied program and excited to get to work. I also can't thank UNCG enough because I wouldn't be here without my players and athletic director Kim Record. This last decade coaching the Spartans has been extremely rewarding."

UNCG sent a letter to students informing them of Miller's new move.

UNCG Spartans Athletic Director tweeted, "I want to thank Coach Miller for his commitment to UNCG these past 10 years. We wish him all the best at Cincinnati. They are getting a terrific leader and a better human being."

Thank you @CoachWesMiller. We love you.

“I want to thank Coach Miller for his commitment to UNCG these past 10 years. We wish him all the best at Cincinnati. They are getting a terrific leader and a better human being.” -- @UNCGSpartansAD #letsgoG | 📰https://t.co/aREuNdV2S3 pic.twitter.com/TFB2MsnCD3

UNCG is coming off the NCAA Tournament appearance and its second in the past three tournaments led by Miller. The Spartans were a No. 13 seed and fell during the first round to Florida State. Miller went 185-135 in 10 seasons at UNCG and finished in the top three of the SoCon the past five seasons.

Miller is also nearing his 200-win barrier before turning 40, according to CBS Sports.

"Wes Miller is one of the most outstanding young coaches in our game and what he did at UNC- Greensboro makes me believe he is the most outstanding," Williams said. "As a player at North Carolina, he came closer to reaching his full potential than any player I've ever coached. His energy, his determination, his intelligence and his care for young people convinces me that he will continue at that level. I am so happy for him."

Miller will replace recent coach, John Brannen and will be the 28th coach for Cincinnati.

His former players are also tweeting about how much they appreciate him.

Bittersweet but Coach deserves it, he will always be UNCG’s coach!!

"The UNC Greensboro men’s basketball team has seen unprecedented success throughout the past 10 years under the leadership of head coach Wes Miller. It’s no surprise that other universities across the country have been paying attention. We have worked hard to keep Wes at UNCG, but despite our best efforts, he has accepted an offer as head men’s basketball coach at the University of Cincinnati.

More than a wonderful coach, Wes is a leader and a tremendous human being. He mentors his players, is selfless in his devotion to them and to the UNCG community, and continues to inspire current and former players with his wisdom and dedication. We both consider him a friend, and will miss him more than we can say.

As many of you know, Wes achieved a great deal at a young age, including two NCAA Tournament appearances in four years, five consecutive seasons of 20 or more victories, and two Southern Conference Tournament Championships. He’s coached some of the best talent the hardcourt of Fleming Gymnasium has ever seen. He did it with class, dignity, and grace.

So while he will be missed, we know that the strong foundation he established for Spartan men’s basketball puts us in a position to find a successor who will have the opportunity and privilege to enjoy continued success at the highest level and coach a talented team of players hungry for more SoCon Championships, March Madness, and NCAA tournament victories. A national search for the program's next head coach will begin immediately.

Wes, we wish you all the best (except when your team is playing against us)."