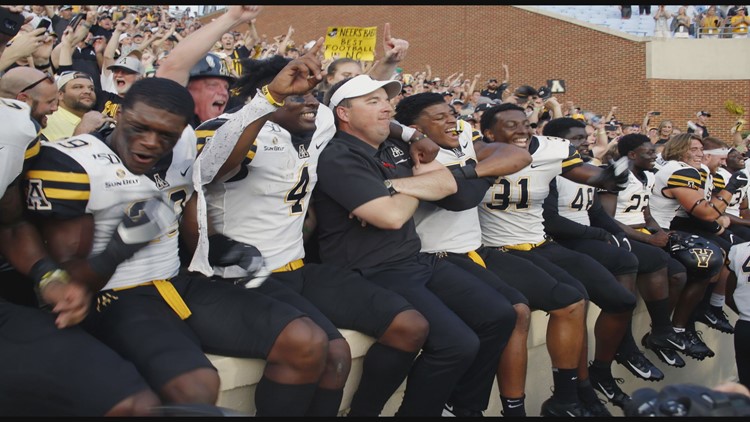 CHAPEL HILL, N.C. — What a time for a Black and Gold breakthrough.

The kick is blocked — again.

The second-ever football meeting between the two schools and first since 1940 drew a spirited, sold-out crowd to Kenan Stadium, and the Mountaineers posted their first win against a Power Five conference team since the historic upset of Michigan in 2007, when Appalachian was a title-winning FCS program.

It was App State's eighth victory against an ACC program and the first since beating Wake Forest 20-16 in 2000.

UNC scored with one second left in the first half and again in the third quarter to turn a 27-10 deficit into a 27-24 nailbiter, but the Mountaineers responded immediately to the Tar Heels' long touchdown march with a 75-yard touchdown drive that included Zac Thomas' 31-yard pass to Thomas Hennigan and a 43-yard connection with Malik Williams.

Evans' short touchdown run late in the third quarter provided some welcomed separation, Davis-Gaither ended the next series at App State's 27 with his first career interception and the Tar Heels finally pulled within 34-31 on a short touchdown run with 3:01 remaining.

Facing a third-and-5 from his own 30, Thomas gained 12 yards on a play-action keeper around the right side to move the chains, and an App State punt gave the Tar Heels one last possession starting from their 20 with 30 seconds left. The 24-yard completion into App State territory set up a long-shot field-goal try, but the Mountaineers enjoyed another Michigan-like finish.

With three national titles, four straight bowl wins and three consecutive conference titles, App State's championship-winning ways remain a point of pride for college football in the state of North Carolina, and the Mountaineers have improved to 3-0 with back-to-back wins against in-state FBS opponents.

Carolina, we keep callin' you home.

UNC used a long kickoff return and 21-yard touchdown pass to take a lead 17 seconds into the game, but App State responded with the next 20 points, starting with two Chandler Staton field goals and continuing thanks to Taylor's two takeaways.

Staton converted kicks of 31 and 43 yards before Taylor, who finished with 2.5 sacks, made the first of several big plays early in a UNC drive. He rushed around the end, forced a fumble on a blindside sack of Sam Howell, returned to his feet, scooped the ball up at the 20-yard line and raced into the end zone with 3:39 remaining in the first quarter.

With App State ahead 13-7 early in the second quarter, Taylor fought off a low block and returned to his feet in time to deflect Howell's hard, short-range pass to the left. He located the ball in time to intercept it and gained 19 yards on a return to the UNC 26.

The Mountaineers' defense later held inside the 10, forcing a short field goal with the help of another Taylor pass deflection, and App State moved back into scoring range thanks to a 12-yard pass to Williams on third down, coupled with a 15-yard targeting penalty. Evans' 31-yard sprint to the 4 set up his second touchdown, a 2-yard run on a third-and-goal option pitch.

Taking a snap with eight seconds left in the half, UNC cut its deficit to 27-17 heading into the break via Michael Carter's 11-yard touchdown reception on a screen pass from Howell, and the Tar Heels used a 15-play, 98-yard touchdown drive in the third quarter to close the gap to 27-24.

App State had some type of answer, as the 31-yard pass to Hennigan and 43-yard pass to Williams set up Evans' 2-yard touchdown run that increased the margin back to double figures. UNC advanced to the Appalachian 36 before Davis-Gaither made a diving interception to thwart another scoring threat, and the Mountaineers were able to hold on after Howell's 2-yard keeper for a touchdown with 3:01 left trimmed the edge to 34-31.