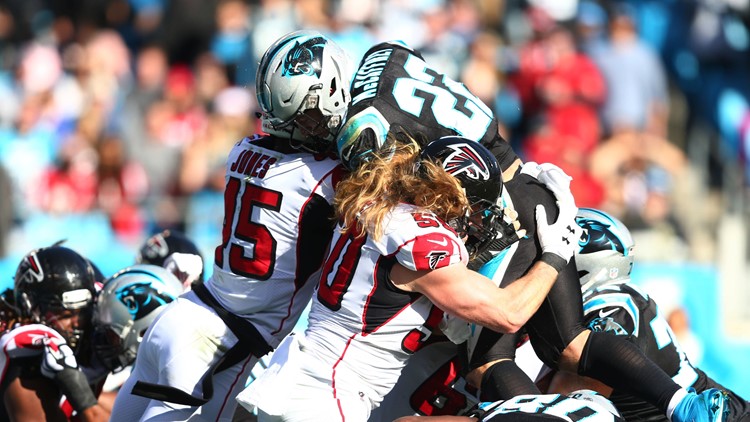 Photo by: GANNETT
Christian McCaffrey tries to leap over the defense in Sunday's loss to Atlanta.

Matt Ryan threw for 239 yards and three touchdowns, and the Atlanta Falcons handed Carolina Panthers their seventh straight loss and knocked their NFC South rivals out of playoff contention with a 24-10 win on Sunday.

Ryan found Calvin Ridley for a 75-yard touchdown strike on the first play of the second half for the go-ahead score. He also connected with Mohamed Sanu on a crossing route for a 44-yard score and threw a 1-yard TD pass to Julio Jones in the back of the end zone. 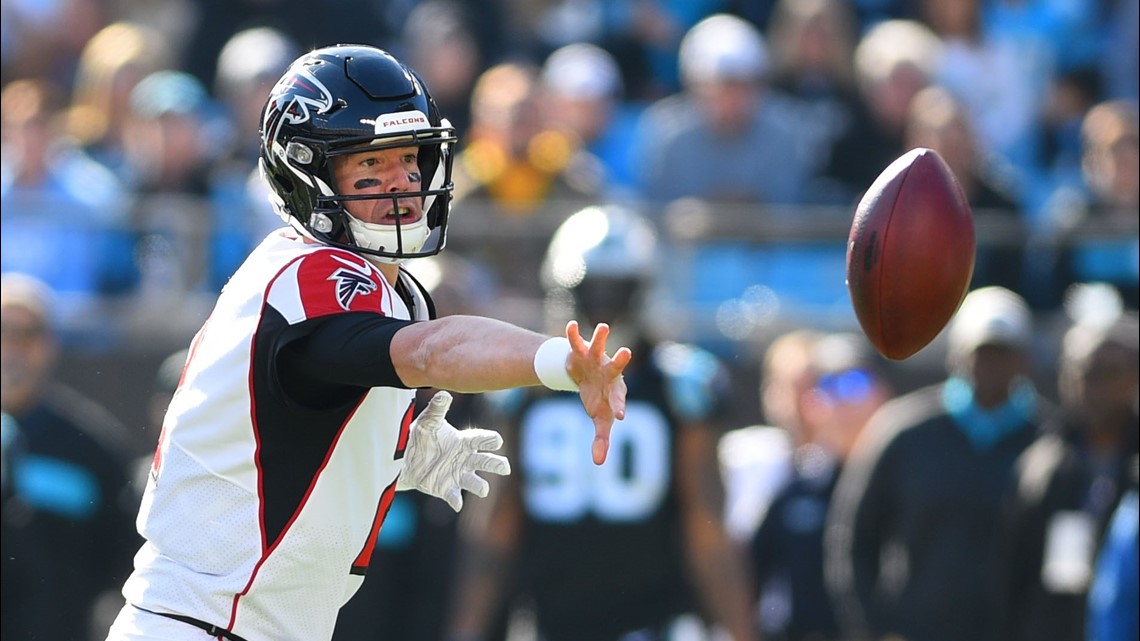 Ridley had three catches for 90 yards and Sanu had five grabs for 81 yards for the Falcons (6-9). Brian Hill had 115 yards on eight carries.

The Falcons intercepted Taylor Heinicke three times and forced four turnovers after allowing a touchdown on the game's opening possession. Heinicke, making his first NFL start for the injured Cam Newton, left the game briefly in the second quarter with a left elbow injury, but returned and was hit repeatedly by the Falcons.

Christian McCaffrey had 21 rushes for 101 yards and 12 receptions for 77 yards and set an NFL record for receptions in a season (106) by a running back.

McCaffrey was pulled late in the fourth quarter to rest, marking the first time he's missed an offensive play since Week 9.

Panthers safety Eric Reid has already been fined four times by the NFL for illegal hits and almost certainly will get a fifth letter in his locker next week. Reid was flagged for unnecessary roughness for a helmet-to-helmet hit on Ridley in the second quarter as Ridley tried to make a sliding catch.

Reid has been outspoken about the league drug-testing him six times in 11 weeks and fining him for four hits, one of which has already been overturned. Reid sued the NFL for collusion for keeping him out of the league because of his decision to kneel alongside Colin Kaepernick during the national anthem to protest racial and social injustice.

KEEPING UP WITH JONES

Jones continued to be a problem for the Panthers. He came into the game averaging more than 100 yards in 12 career games against Carolina and didn't wait long to assert himself with four catches for 28 yards and 1-yard TD catch on Atlanta's first possession.

Falcons: Running back Tevin Coleman left the game with a groin injury in the second half and did not return with the Falcons up by two scores.

Panthers: Pro Bowl guard Trai Turner left the game with an ankle injury and did not return.

Falcons: Visit the Buccaneers next Sunday.

Panthers: Visit the Saints next Sunday.