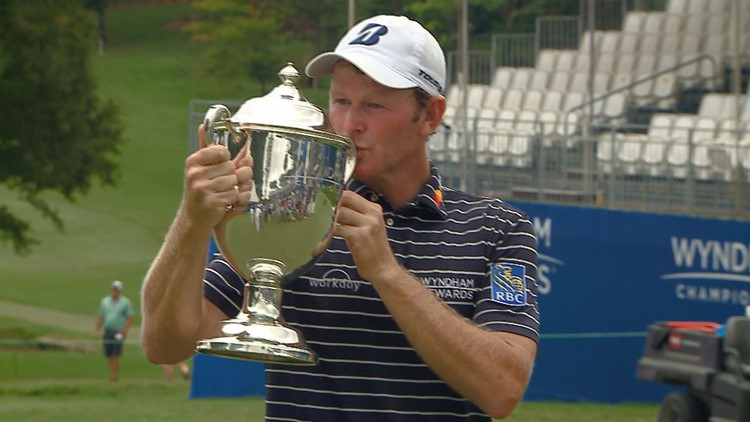 GREENSBORO, N.C. – Two-time champion Brandt Snedeker will return to the Wyndham Championship later this month to defend his title.  The 80th Wyndham Championship, which will determine the $10 Million Wyndham Rewards Top 10, is set for July 30-Aug. 4, 2019 at Sedgefield Country Club.

In addition to winning the Wyndham twice, Snedeker also has two wins in the AT&T Pebble Beach Pro-Am (2013, ’15) and the Farmers Insurance Open (2012, ’16).  The 2012 FedExCup champion has four top-five finishes this season but hasn’t won since last year’s Wyndham.  He finished tied for second at the Safeway Open, tied for fourth at the RBC Canadian Open where he shot 60 in the second round and tied for fifth at the PLAYERS Championship and the Rocket Mortgage Classic.

“It was great to win here last year, but I wasn’t playing great,” Snedeker said during Wyndham Championship media day at Sedgefield Country Club yesterday.  “I caught a week where everything went right, I hit it great and made some putts, but it wasn’t a consistent year for me; I was too up and down.  This year, I’ve played a lot better.  I just haven’t had that week when I put four rounds together.

“In the last month, I’ve seen a lot of improvement and feel like I’m playing better golf.  I’m just waiting for that win to come through and really validate how well I’m playing.  I’m 30th right now in FedExCup points, and I really haven’t had that great finish yet where I feel like everything went right.  I’m playing a lot more consistent this year; I’m not missing many cuts, and my game feels like it’s more where I want it to be, it’s just getting that week where I can put all four rounds together.”

Perhaps a return to Sedgefield Country Club, where in addition to last year’s victory, he recorded top-eight finishes in 2009, ’10, ’14 and ’16 when he finished tied for third, might be just what the Nashville, Tennessee native needs push him to victory.

“I love it; it’s right up my alley,” Snedeker said of Sedgefield’s Donald Ross masterpiece.  “It’s not an overly long golf course so you have to put the ball in the fairway off the tee with a lot of wedges and short irons. You have to make a lot of birdies.  The greens here are very fast, very undulating.  My strengths are short game and putting so I love the greens here.  They’re always in great shape; they roll perfectly.

“Length’s not an overriding factor so I can come here and play a similar style golf to guys that hit it 30 or 40 yards by me because there’s nowhere for them to hit it.  There’s only two par fives where they have an advantage so it turns into my kind of golf.  I love old school Donald Ross golf courses so this one is right up my alley.  I have great memories here, I have great history here, I love being here, and the golf course suits me perfectly.”