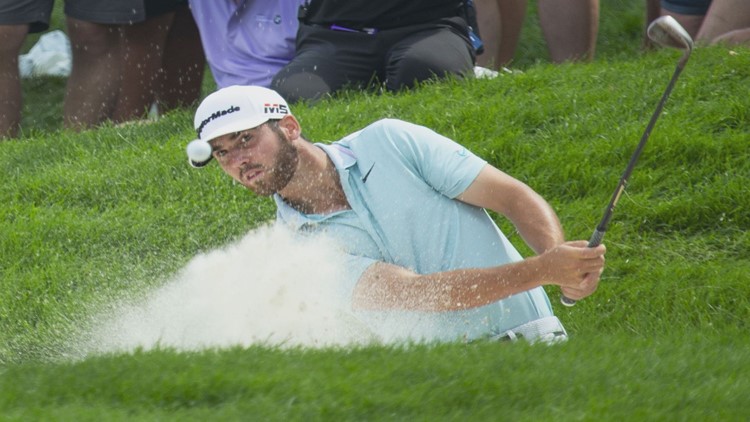 Photo by: Associated Press
Matthew Wolff hits from a bunker on the 12th hole during the final round of the 3M Open golf tournament Sunday, July 7, 2019, in Blaine, Minn. (AP Photo/Andy Clayton- King)

GREENSBORO, N.C. – When the first round of official tournament play in the 2019 Wyndham Championship begins three weeks from today, three of the most heralded rookies in recent PGA TOUR history, Matthew Wolff, Collin Morikawa and Viktor Hovland, will be in the field.  The 80th Wyndham Championship, which will determine the $10 Million Wyndham Rewards Top 10, is set for July 30-Aug. 4, 2019 at Sedgefield Country Club.

All three of these future superstars accepted a Wyndham Championship sponsor’s exemptions earlier this year.  Wolff, however, won last week’s 3M Open in dramatic fashion eagling the last hole to take a one-stroke win over Morikawa and Bryson DeChambeau who eagled the same hole moments earlier to take the lead.

Prior to Wolff, only Ben Crenshaw (1973) and Tiger Woods (1996) won an NCAA individual title and a PGA TOUR event in the same year.  The Agoura Hills, Calif., native is the ninth-youngest winner in PGA TOUR history.  With his win in the 3M Open in his fourth TOUR start, Wolff joined the PGA TOUR as a member through the 2020-’21 season and no longer needs the sponsor’s exemption he accepted.  Wolff finished tied for 19th in the 2015 AJGA Wyndham Invitational presented by BB&T and is the 87th Wyndham Invitational alumnus to earn PGA TOUR membership.

Morikawa, who finished tied for second with DeChambeau at the 3M Open, earned 245 FedExCup points last weekend, and when added to the 89 he earned previously, totals 334 points giving him more points than earned by No. 150 in last season’s FedExCup point standings.  With that milestone, Morikawa, 22, earned PGA TOUR special temporary membership meaning he can accept unlimited sponsor’s exemptions for the rest of the season as he works to earn PGA TOUR membership for next season which he will accomplish by earning at least as many points as No. 125 in this year’s FedExCup point standings.  That number is currently 286.

Morikawa played four seasons at the University of California where he was a three-time, first-team All-American.  He was the Golfweek Men’s National Player of the Year in 2018 and was named Pac-12 Player of the Year this past season.  The Los Angeles native was formerly No. 1 in the World Amateur Golf Rankings.  He played the AJGA Wyndham Invitational in 2013 and ’14 finished tied for ninth and tied for 72nd.

Hovland, a native of Norway, also turned professional this summer after playing with Wolff at Oklahoma State University.  He finished tied for 32nd at the Masters and was low amateur joining CBS Sports’ Jim Nantz and 2019 Masters champion Tiger Woods in Butler Cabin at Augusta National after the tournament.  He finished tied for 12th as low amateur at the U.S. Open at Pebble Beach before turning professional.  In his three professional starts, he finished tied for 54th at the Travelers Championship and tied for 13th at both the Rocket Mortgage Classic and the 3M Open.  The 2018 U.S. Amateur Champion won the 2019 Ben Hogan Award as the nation’s top college golfer.

“What an amazing 3M Open we saw with Matt Wolff and Colin Marikawa dueling it out with Bryson DeChambeau,” tournament director Mark Brazil said.  “We’ve known about Collin and Matt for quite a while since they played in the AJGA Wyndham Invitational and Wyndham Cup over the years.  For Matt to win with Collin tying for second, and basically securing their cards for next year, was a lot of fun to watch.  I think everyone got a good look at some of golf’s future.

“We gave Collin and Matt sponsor’s exemptions early in the year along with Victor who was U.S. Amateur champion, low amateur at the Masters and low amateur at the U.S. Open so he has quite a resume as well.  To have those three ‘young guns’ coming to the Wyndham Championship at Sedgefield, which two of them have played, is a great deal for the tournament and says a lot about what we’re trying to do with the young talent on the PGA TOUR.”