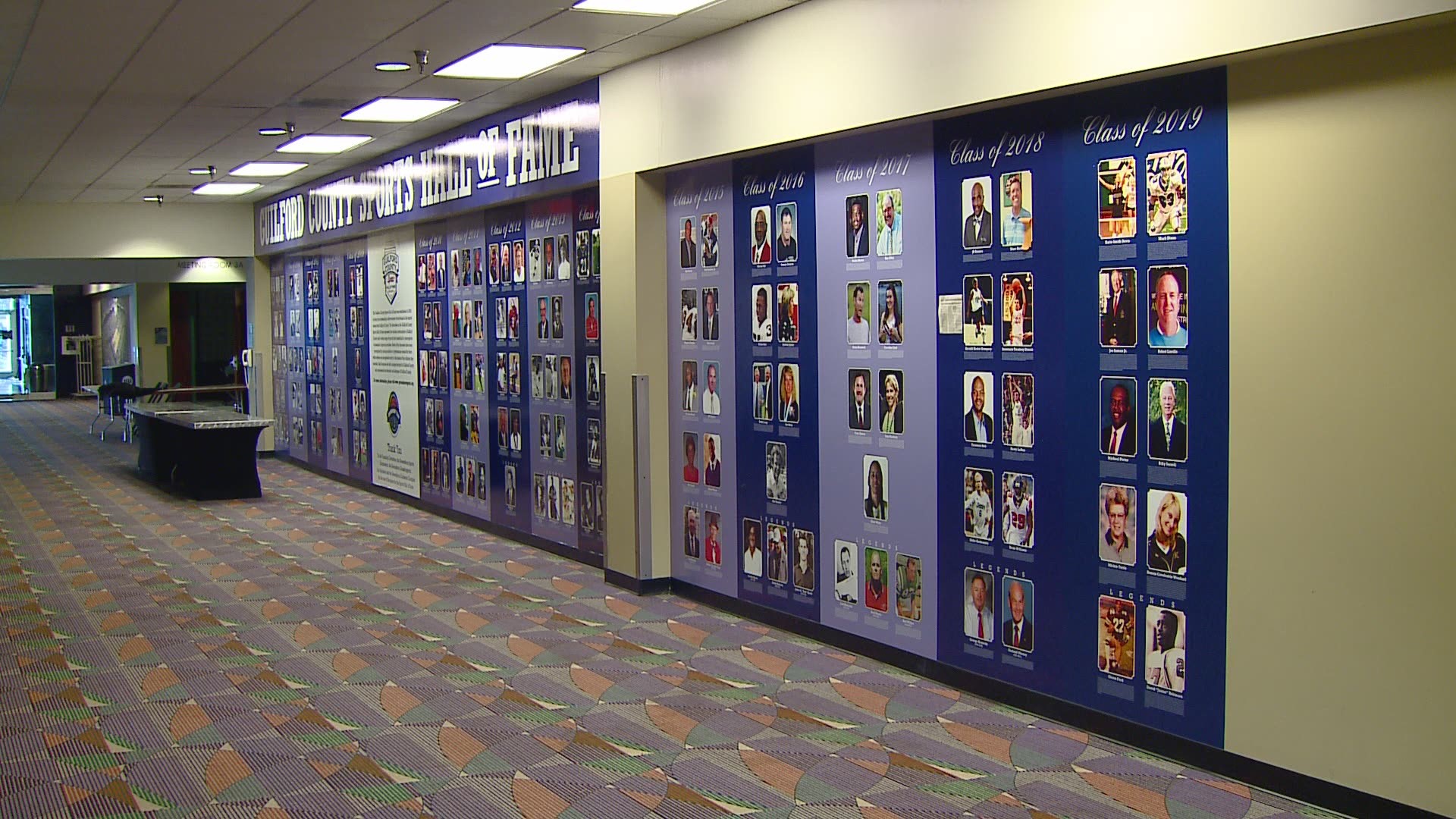 GREENSBORO – Ten members have been added to the Guilford County Sports Hall of Fame with the Class of 2019 announced Wednesday.

The new members include a pair of golfers who made their marks locally and nationally, Joe Inman and Robert Linville. 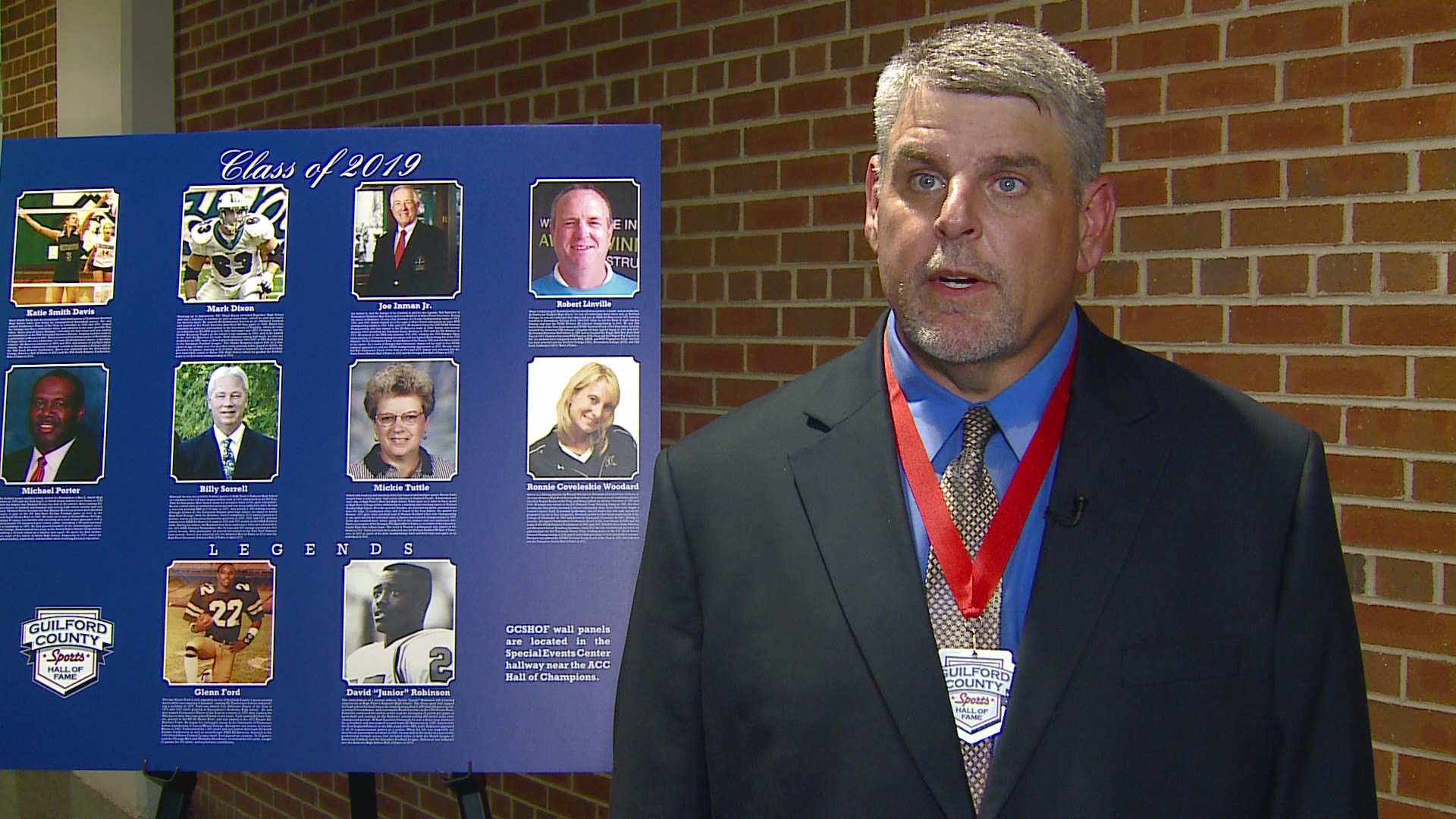 Two other selections are members of the Legends Class, created in 2010 for posthumous induction. The Legends for 2019 are Glenn Ford, former football star at Grimsley, and Junior Robinson a multi-sport standout at High Point Andrews.

While she was also an accomplished basketball player, Katie Smith Davis was an exceptional volleyball player at Northwest Guilford and later at Greensboro College. At Northwest she was twice conference player of the year and helped the Vikings win three conference titles and make the state playoffs four times. She played Junior Olympics volleyball for four years and was all-tournament on a team that won the gold medal in Hawaii. Katie continued her stellar career in college and was a four-time first team all-conference choice, a two-time coaches All-American and winner of several other awards. She holds multiple records at Greensboro College and in the USA South Conference. Katie was named to the Greensboro College Athletics Hall of Fame in 2012 and the USA South Atlantic Hall of Fame in 2018.

Growing up in Jamestown, Mark Dixon went to Ragsdale High School and was a standout in football and basketball, which he said was really his favorite sport. He made all-conference as an offensive lineman and played in the East-West All-Star game in 1989. Mark earned a scholarship to Virginia, where he went on to become All-ACC, win the Jacobs Blocking Trophy and be named an All-American. Injuries set him back and he was not drafted by the NFL, so for four years he played in NFL Europe and in the Canadian Football League. Miami signed him as a free agent at age 28. Equally at home at guard or tackle, he played in 62 games over five years, starting 60 of them. Mark is now the head coach at Galax, Va., where he guided the Maroon Tide to its first state championship in 2015. He recently added the duties of boys head basketball coach.

The late Glenn Ford is still regarded as one of Guilford County’s great running backs. Starring at Grimsley in the mid-1970s, Glenn was twice named City Offensive Player of the Year and was Conference Player of the Year as a senior in 1977 after leading the Whirlies to their first state playoff berth in 10 years. Glenn earned all-state honors and was named to the 1977 Parade All-America Team. He began his collegiate career at  Tennessee before transferring to Lenoir-Rhyne. In his one season there Glenn rushed for 1,093 yards and was named first-team All-South Atlantic Conference and second-team NAIA All-America. Selected in the 1984 United States Football League draft, Glenn played two years. In 28 games with the Chicago Blitz and Memphis Showboats, he rushed for 433 yards, caught 27 passes for 315 yards and scored four touchdowns.

Joe Inman had the fortune to be coached in golf by two legends, Bob Jamieson at Grimsley and Jesse Haddock at Wake Forest, and he learned their lessons well. At Grimsley he played on three state championship teams. Joe walked on to the team at Wake Forest and played on three ACC championship teams from 1968-70. He finished third in the 1968 NCAA Tournament and was All-America in 1969. Joe won several amateur titles, including the Carolinas Junior in 1965 and the North Carolina Amateur in 1970. He played on the PGA Tour from 1974-86, winning the 1976 Kemper Open. On the Champions (Seniors) Tour, he was rookie of the year in 1998 and won three events in his career. As a coach at Georgia State, he led his team to four NCAA regional appearances and one NCAA championship appearance. He was Sun Belt Coach of the Year twice.

When it comes to golf, Robert Linville has excelled as a player, a coach and an instructor. At Northwest Guilford he made all-conference for three years and at Guilford College he was all-conference four times and an NAIA All-American in 1979. He has always kept playing, and won the Bermuda Run Senior Open 2010 and the Carolinas PGA Senior Open in 2011. Robert coached at Greensboro College from 1995-2007. The Pride won the NCAA Division III national championship in 2000 and finished second two other times. He was conference coach of the year three times and national Coach of the Year twice. He coached the USA national collegiate team against Japan in 2000 and 2006 and won both times. Robert founded a golf school in 1989, founded the Peggy Kirk Bell girls tour in 2007 and was twice named the Golf Performance PGA Teacher of the Year.

His football jersey number is retired at Ben L. Smith High and Michael Porter’s accomplishments since his playing days are equally impressive. After earning all-state honors in two sports and setting school records that still stand, Michael became the first African-American player from Guilford County to play in the East-West Football All-Star Game. He went on to star at Lenoir-Rhyne, excelling as a kick return specialist with a school-record 702 combined punt return yards, including a 96-yard runback for a touchdown in 1969. He also played baseball at the college level. Michael served two years in the Marine Corps before resuming a 30-year career as a teacher and coach. He spent the final 23 years back at Smith, where he coached football, basketball and baseball and taught Physical Education. The field house at Smith is named in his honor.

The embodiment of a natural athlete, David “Junior” Robinson left a lasting impression.  The three-sport High Point Andrews standout capped his high school football career by totaling more than 2,500 total offensive yards, scoring 23 touchdowns and starring for  North Carolina in the 1985 Shrine Bowl. Junior continued a stellar senior year averaging 18 points in basketball and running on the Andrews’ record-setting 400 relay state championship team. At East Carolina he was a three-year starter in the secondary and was named second-team All-America in 1989. Selected by New England in the fifth round, Junior appeared in all 16 regular-season games his rookie season. When his life was tragically cut short by an automobile accident in 1995, he was still in the midst of a professional career that included stints in both the World League of American Football and the CFL. He was inducted into the Andrews High School Hall of Fame in 2015.

Although he was also an excellent football player at High Point Andrews (a member of the 4-A state champion team in 1972), Billy Sorrell made his strongest mark in baseball. He was a three-time all-conference selection and was named all-state twice. He had a two-year pitching ERA of 0.70 and in 1973 he hit .450. Although drafted by Cleveland, he chose to attend High Point College. With the Panthers Billy compiled a 39-11 career record as a pitcher, was a three-time all-conference pick, made all-district once and all-area once. His 39 wins and 407 innings pitched are still school records. His team won three conference titles and qualified for the 1974 NAIA national tournament. Billy played one season in the New York Yankees system and then embarked on a long career in sales and marketing in the furniture industry.

Gifted with teaching and coaching skills that transcended multiple sports, Mickie Tuttle helped blaze a trail for girls high school athletics in Guilford County. A basketball and track star at Allen Jay High School, Mickie lettered in three sports at High Point College before embarking on a teaching and coaching career at Western Guilford. Over the next two decades she coached six sports, amassed more than 650 wins, 16 conference titles and 12 Coach of the Year honors. She guided the Hornets’ 1977 girls track and field team to Western’s first state championship in any sport and led the volleyball team to district and sectional championships in 1989. Mickie also coached boys tennis, going 26-6 in two seasons with one conference title. She has been named to Western's Sports Hall of Fame   and the court at Western's gymnasium is named in her honor. She's also in the Graham Sports Hall of Fame as a member of the well-known Rubi-Otts softball team.

Soccer is a lifelong passion for Ronnie Coveleskie Woodward, who honed her skills as an all-state player at High Point Central. A three-year all-conference player and two-time Region Player of the Year, Ronnie became the first woman awarded a soccer scholarship to Duke. A standout goalkeeper, she set marks that still rank among the program’s top 10 in four categories. She landed her first head coaching job at College of Charleston in 1999 and moved to Vanderbilt in 2001. In 11 seasons, Ronnie earned Southeast Conference Coach of the Year honors in 2005 and led two teams to the NCAA Tournament. Currently a coach and administrator for the Tennessee Soccer Club, she led teams to the U.S. Youth Soccer National Championship in 2016 and to state championships four consecutive seasons. She was named the NSCAA National Youth Coach of the Year 2016 and inducted into the Tennessee Soccer Hall of Fame 2017.