The Guilford County Sports Hall of Fame is set to add 10 new members. 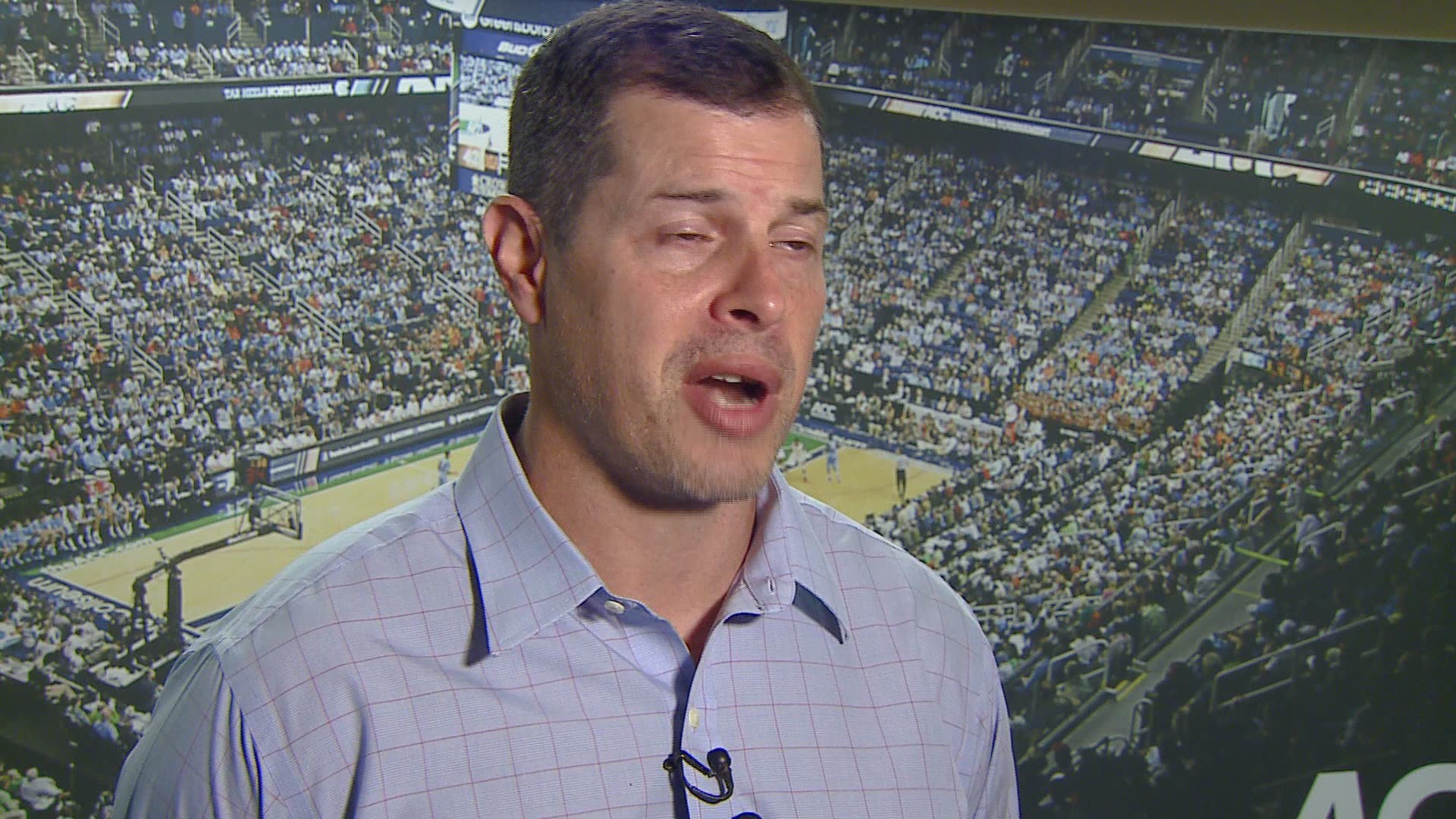 GREENSBORO, N.C. -- The Guilford County Sports Hall of Fame has introduced the 10-member class of 2018.

You can learn more about each of the inductees below:

His full name is James Benton Baynes, but almost everyone knows him as JB. He played three sports at Grimsley but baseball was his true love. He was a member of the Whirlies' state 4-A championship team in 1980 and went on to play at Howard University, where he set the school record for home runs. He hit over .300 every season, was the MEAC Player of the Year in 1986 and was selected for the Howard Athletics Hall of Fame in 2007. His career was cut short by a knee injury, but JB remained heavily involved in baseball. He has coached at area middle schools and high schools, with local travel teams, in the Parks and Recreation leagues, the Greensboro Colt League and the Metropolitan Junior Baseball League. JB is an ordained minister and is the North Carolina Commissioner of the Metropolitan Junior Baseball League.

If you have ever watched a sporting event in Greensboro such as the ACC men's or women's basketball tournaments, USA Figure Skating, USA Gymnastics, USA Track and Field, NCAA Division III soccer or golf championships, or the Public Links golf tournament, to name just a few, you can thank Marc Bush. Since 1993 Marc has been part of the Tournament Hosts of Greensboro and been a tireless worker to bring a multitude of events to Greensboro. He has also served as president of the Greensboro Sports Commission, been a member of the Board of Directors of the Greensboro Sports Council, and was General Chairman of the 2017 Wyndham golf tournament. Marc is a graduate of Grimsley, where he played football and baseball, and from UNC Chapel Hill. He has been actively involved in the economic and sports development of this area for 33 years and is currently the president of the Greensboro Sports Foundation and curator of the ACC Hall of Champions.

Sherrill was a four-year starter in both soccer and basketball at Westchester Academy from 1992-96. She won two state championships in soccer while scoring 115 goals and earning all-state and all-South honors. She won another state title in basketball, was a three-time conference player of the year and an all-state selection. Sherrill chose to play soccer at Duke, where she started 84 of 87 matches and scored 35 goals, fourth on the Blue Devils' career list. She scored 10 game-winning goals, was twice first-team All-ACC and helped Duke make three NCAA tournament appearances. Kester was also voted to the NSCAA All-American team in 1999. She was named to the list of the ACC's top 50 women's soccer players of all-time. She played professionally with the San Diego Spirit and was a member of the U.S. National team. In a three-game stretch for them in 2000, she recorded three goals and an assist. Kester was inducted into the inaugural Hall of Fame class at Westchester Academy in 2009.

When Annemarie played a sport, she played it well, starring in basketball, softball and tennis at Grimsley. She played shortstop and hit cleanup on a state playoff softball team and made the state tennis playoffs in doubles. She was most recognized in basketball, being named the North Carolina High School Athletic Association's Player of the Year in 1983 when she was also an All-American and was named as one of the top 50 players in the country. She continued her basketball career at NC State and played on the Wolfpack's ACC championship teams in 1985 and '87. As a senior, she averaged 35 minutes, 18 points, five rebounds and three assists a game. She stayed involved in the game as a highly respected women's basketball official from 1996-2004. When she wasn't playing sports, Annemarie was first chair violin in the Grimsley orchestra and played in the Greensboro Youth Symphony Orchestra. She now is a vice president at BB&T Bank. 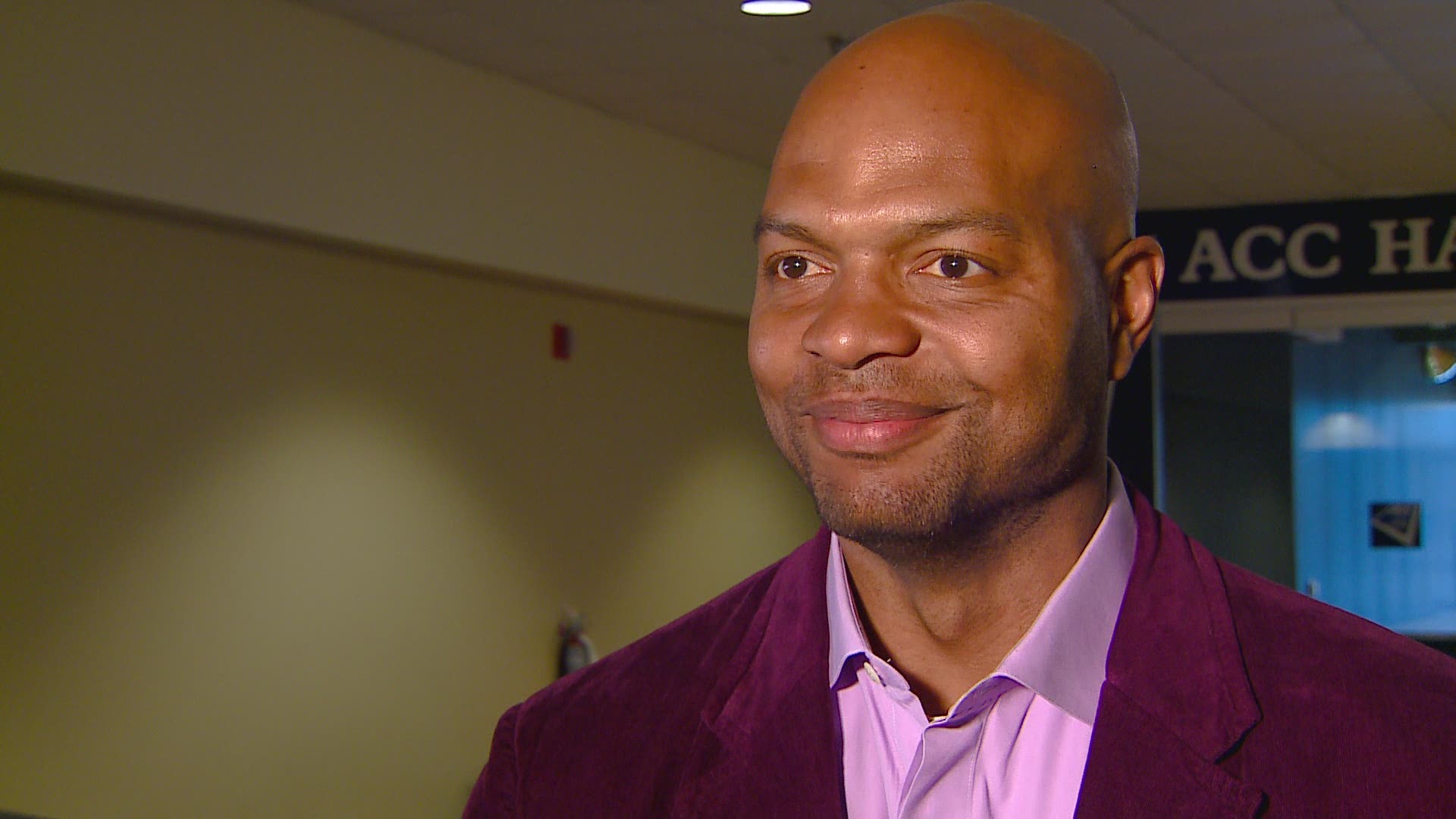 Inspired to play sports by an older brother, Terrence Holt soon carved out his own niche. Whereas Torry Holt was exceptional as an offensive football player, Terrence became a standout on the defensive side. He was excellent in football and basketball at Eastern Guilford, being named the News & Record's Player of the Year in hoops. Terrence went on to NC State and starred as a defensive back. He was a three-year starter, twice an All-ACC selection and intercepted five passes. He blocked 12 kicks in his career, including four field goals in one season. Drafted in the fifth round by the Detroit Lions, he played six seasons in the NFL, mostly as a free safety. He played in 71 games, starting 43, and recorded eight interceptions, including three as a rookie in 2004, and made 242 tackles. He joins his brother Torry (Class of 2012) as a member of the Guilford County Sports Hall of Fame.

Few people have had the experience, or the success, that the late George Kennedy achieved in coaching soccer. He began in Jacksonville, FL, winning three state titles at Bishop Kenny High School. Making his way to North Carolina, he coached Belmont Abbey College for two years, then the Wake Forest University club team. Under George, the Deacons became an NCAA Division I intercollegiate program and he was head coach from 1980-85. He was the ACC Coach of the Year in 1981 and compiled a record of 64-52-14. George also coached in the Twin Cities Youth Soccer Association and guided five teams to Under-19 state championships. At Western Guilford High School his boys won the state 3-A title in 1992 and the girls claimed state 1-A/2-A championships in 2004-05. In 2014 George was inducted into the NC Soccer Hall of Fame. After retiring from teaching, George coached at Bishop McGuinness until his death at age 71 on Nov. 23, 2016.

Rusty LaRue didn't just play three sports at Northwest Guilford, he was dominant in each. As a senior, he was the News & Record's Guilford County Player of the Year in football, basketball and baseball, and was named the North Carolina high school Male Athlete of the Year. He continued his all-around play at Wake Forest, where he started at quarterback, was a key contributor to back-to-back ACC championship basketball teams and even pitched a little one season. As a senior, Rusty broke several NCAA and ACC records for passing, including 55 completions in a game. He played professionally in the NBA, appearing in 98 career games, and was a member of the Chicago Bulls 1998 NBA championship team. He also played in Russia and Italy. Rusty has coached basketball on the high school and college levels since 2004, including several years as an assistant at his alma mater, Wake Forest.

Although he was well-versed in many sports, swimming really got into Garland Murray's blood. He played baseball and basketball at Rankin High School in Greensboro in the 1930s, then football, basketball and baseball for two years at Guilford. After serving three years in the Navy in World War II, he resumed his education at Springfield College, where he was a member of the swim team. In 1946 he joined the coaching staff at Greensboro Senior High School (now Grimsley), where he formed and then coached the swim team through 1952. Garland became president of the Greensboro Swimming Association and organized its first championship meet in 1959. He went to work for the Greensboro Red Cross and became its Executive Director in 1972. Garland retired in 1986 with 36 years of service, establishing numerous swimming and lifesaving programs. He died on March 13, 2011.

Excellence has marked the career of Eddie Radwanski as a player and as a coach. He was a mainstay on UNCG's consecutive NCAA Division III national champions in 1982 & 1983. More than 30 years later, he still ranks second in assists, eighth in points and 10th in goals scored. After being the first player selected in the inaugural MISL draft in 1985, his pro career included a championship in the MISL and another in the USISL indoor league. He was a member of the US National Team and played for the Greensboro Dynamo. As a coach Eddie's UNCG women's teams won seven regular season and four tournament championships. His teams went 139-65-13 in 10 years and appeared in five NCAA tournaments. Since 2011, he has been the women's coach at Clemson, winning the 2016 ACC championship. He won coach of the year in the Southern Conference four times and ACC coach of the year in 2016. Eddie is a member of the UNCG Hall of Fame as well as the Carolina Dynamo Hall of Fame.

Brian was a terrific athlete at Southwest Guilford. In football, he rushed for 1,955 yards as a senior, including 368 yards in a game against Burlington Cummings and played in the East-West All-Star game in 1998. He was also a two-year starter in basketball. He concentrated on defense in football at NC State, where he overlapped with fellow inductee Terrence Holt. Brian played a year at free safety and two years at cornerback for the Wolfpack. He made five career interceptions and blocked five kicks. The Minnesota Vikings drafted him in the fourth round in 2002 and he went on to appear in 132 NFL games, 99 as a starter. In his rookie year he intercepted five passes and tied for the NFL lead with 205 return yards. He made four interceptions in 2005. Overall, playing with four teams over 10 seasons, Brian intercepted 19 passes, made 408 tackles and defended 75 passes.