The Panthers sent the Millis Center out with a bang, winning the school's only conference tournament title on either the men's or women's side. 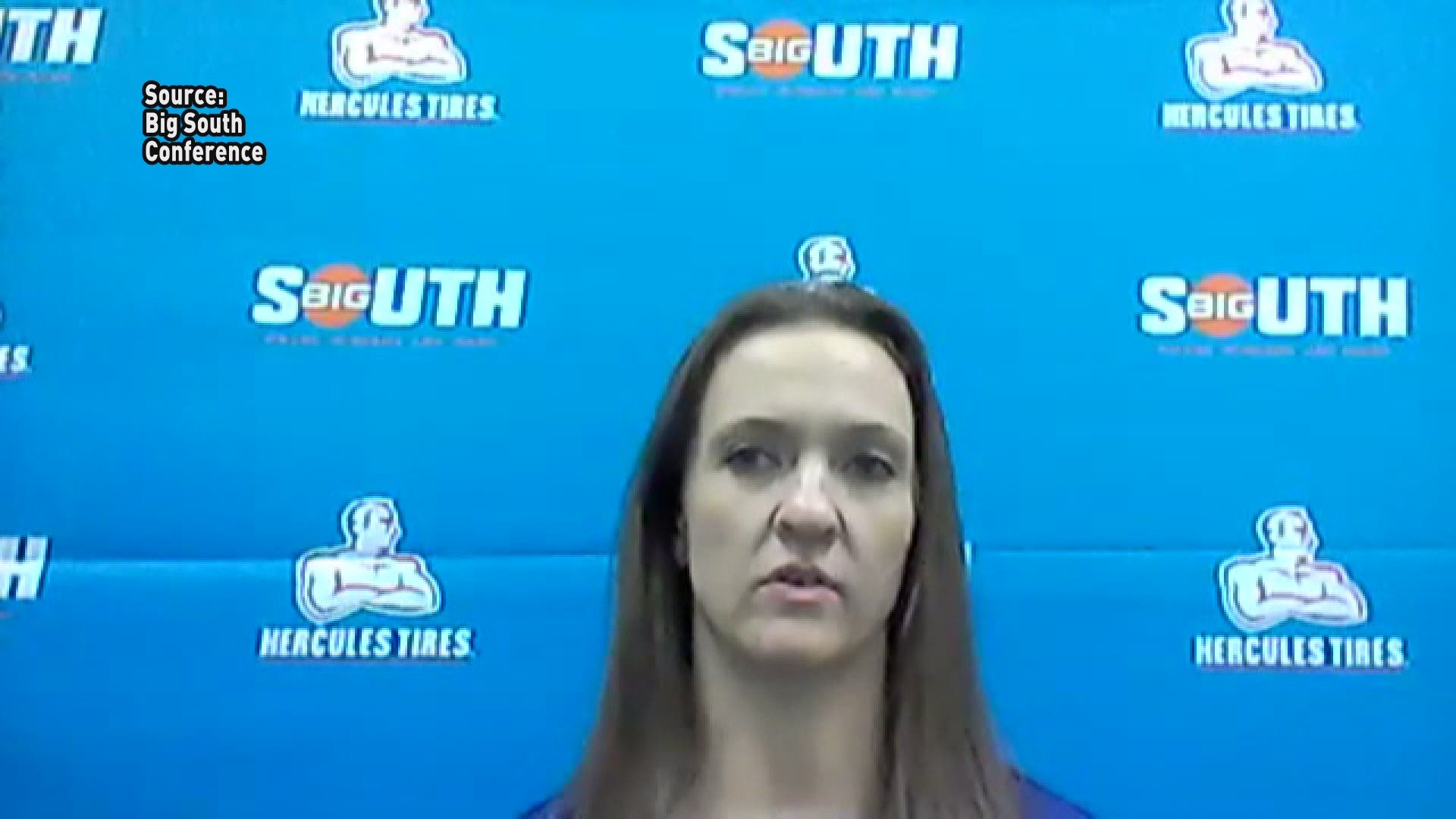 The Panthers sent the Millis Center out with a bang, winning the school's only conference tournament title on either the men's or women's side, in the final game scheduled to be played on the court. The win gives High Point 22 on the season, tied for the most wins in a single season since the program made the jump to Division I in 1999.

HPU fired off 24 shots from behind the arc in the game and connected on 10 of them, setting multiple Big South Tournament records. The 10 triples are the most in a championship game in Big South history and gave the Purple and White a total of 32 over the three games, the most any team has made in the tournament. Eight of the 10 on Sunday came in the first half, setting a tournament record for most three-pointers made in a single half of the championship game and ending one shy of matching the record for three-pointers in a half in any Big South Tournament contest, not just the finals.

"I can't give enough credit to our girls today," head coach Chelsea Banbury said after the win. "They came out, they played hard, they battled, and executed the game plan. Campbell's a good team. They defend really hard and really well and make you work for everything. They did go on a little bit of a run but our girls responded and were able to hold on and come out on top. This is the exciting part of the year, this is what's fun. [The team] has worked hard all year, through many different and unusual circumstances with COVID, but stayed focused and on the goal. They did stuff off the court that most teams haven't had to do in the past and sacrificed some things to make it happen so the credit definitely goes to the players. They were outstanding today."

Jenson Edwards led the Panthers with 19 points on the day while also dishing out a team-high five assists. The redshirt sophomore averaged 14.7 points, 7.0 rebounds, and 5.3 assists over the three games in the tournament to be named the Big South Tournament MVP - the first in team history. Joining her on the All-Tournament team was Skyler Curran after finishing with 14 points in the title game to be the only other Panther in double digits on Sunday.

Miya Bull nearly had a double-double in the game, finishing with nine points and eight rebounds. Callie Scheier also ended with nine points in the championship, hitting a three in the final minute that sealed the deal and sent the limited crowd at the Millis Center into a frenzy.

High Point held Campbell to just 46 points to take home the title, the fourth time this season the Panthers have held their opponent under 50 points. It's the most times HPU has held an opponent under 50 points since doing it five times in the 2017-18 season. High Point also held the Fighting Camels to shooting only 38.0%, the 21st time this season holding its opponent to shooting under 40% and 18th such victory this year. It marks the most times keeping an opponent under 40% since doing it 21 times during the 2008-09 season.

The Panthers trailed early in the first but turned the jets on in the latter half of the quarter, scoring 13 of the final 16 points of the frame to lead by 11, 24-13, after one. Bull knocked down a three to start the run and hit her second of the day two possessions later after one from Edwards. It marked the second time in Bull's career she hit multiple threes in a game, with the only other time coming against Davidson last year when she suffered a season-ending injury. Scheier hit a free throw in the final minute of the first that was negated by one from Campbell but then she hit all three from the line with four seconds on the clock after getting fouled on a shot from deep.

Neither team had much success offensively early in the second quarter, with the sides combining for just nine points midway through the frame. High Point's lead dipped to as few as 10 just past the midway point but a three from Jordan Edwards - her only points of the day, pushed it back up to 13. The Panthers scored six straight after a Campbell basket to have a 17-point lead with a minute left in the half before the Fighting Camels scored with 30 seconds on the clock to make it 28-23 heading into the break.

High Point took its largest lead of the day at 18 points on the first possession of the second half thanks to a three from Curran. Only one shot for either team went down over the next four minutes before Bull knocked down a jumper in the paint to break the streak. It took another four minutes before HPU connected from the floor again, as Campbell was able to cut the lead down to single digits, 43-36. The Panthers had the final four points of the third after that, with Bull hitting a free throw to get to nine points and Jenson Edwards converting on a three-point play after grabbing a steal to give HPU a 47-36 lead heading into the fourth.

Jenson scored 14 seconds into the fourth quarter to get the lead back up to 13 but the Panthers went ice cold after that, going six minutes without connecting from the floor. A pair of free throws from Claire Wyatt were the only points the Purple and White got during that stretch, allowing Campbell to stick around. Luckily, High Point's defense was up to the challenge and only allowed three Camel shots. It was enough for the visitors to make it a two-possession game, however, cutting the lead to as little as five, 49-44, before Wyatt hit the free throws.

High Point's defensive effort only increased after the offense resumed, surrendering just two more points the rest of the way on a jumper with 25 seconds left. Curran broke the scoreless streak for the Panthers with four minutes to go, sparking a 9-2 run to pull away for good and secure the first tournament title in team history.

The Panthers will learn their fate in the NCAA Tournament tomorrow (March 15) during the 2021 NCAA Women's Basketball Tournament selection show, live on ESPN at 7 p.m.