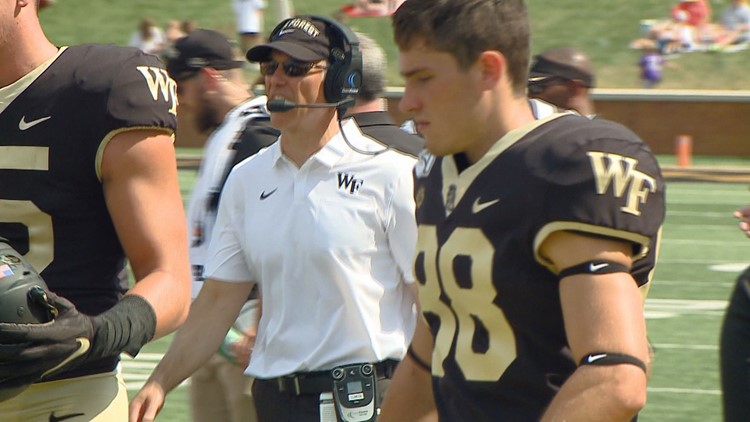 The Paul “Bear” Bryant Award recognizes the country’s top college football coaches for their contributions both on and off the field. The Coach of the Year Award is the only college coaching honor selected after all bowl games are concluded and is voted on by the National Sports Media Association.

Clawson has led Wake Forest to a 6-1 record and a top 25 national ranking in 2019.  The Demon Deacons are ranked No. 23 in the Amway Coaches poll this week and No. 25 in the Associated Press poll.

Wake Forest has experienced its best start to a season since 2006 and is ranked in the NCAA top 10 in passing offense, total offense, first downs and fewest penalties.

Clawson is in his sixth year at Wake Forest and his 20th season as a head coach.  He previously had served as the head coach at Fordham, Richmond and Bowling Green where he led each of those teams to a conference championship and a 10-win season.  Clawson is third in Wake Forest history in career wins and he won his first three bowl games faster than any other coach in school history.  With its sixth win, Wake Forest has earned bowl-eligibility for a school record fourth consecutive year.

Clawson and Clemson’s Dabo Swinney are the only ACC coaches on the watch list.

Kirk Herbstreit of ESPN recently said on College GameDay that “This is the most underrated head coach, maybe in the country, in Dave Clawson.”

“(Clawson is) in his 20th year as a head coach and he’s won at every level,” said Lee Corso on College GameDay.  “He’s won three straight bowl games at Wake, that’s tremendous.  He’s the reason they’re winning at Wake.”

The winner of the Bear Bryant Award will be announced live on Fox Sports Southwest and Fox Sports Go on Wednesday, Jan. 15, 2020 during the awards dinner and ceremony benefiting the American Heart Association, the world’s leading voluntary health organization devoted to a world of longer, healthier lives, at the Post Oak Hotel in Houston.

A new addition to the Bryant Awards, the Heart of a Champion Award will be presented to ESPN College GameDay host Lee Corso at this year’s event. This award was created to honor the legacy of Coach Bryant, while recognizing an individual who has significantly impacted the world of sports, but whose impact may be beyond the realm of coaching.