RB Kenneth Walker III finished with a career-high 131 yards & 3 Touchdowns. Wake Forest is back in action Saturday at home vs. No. 7 Notre Dame 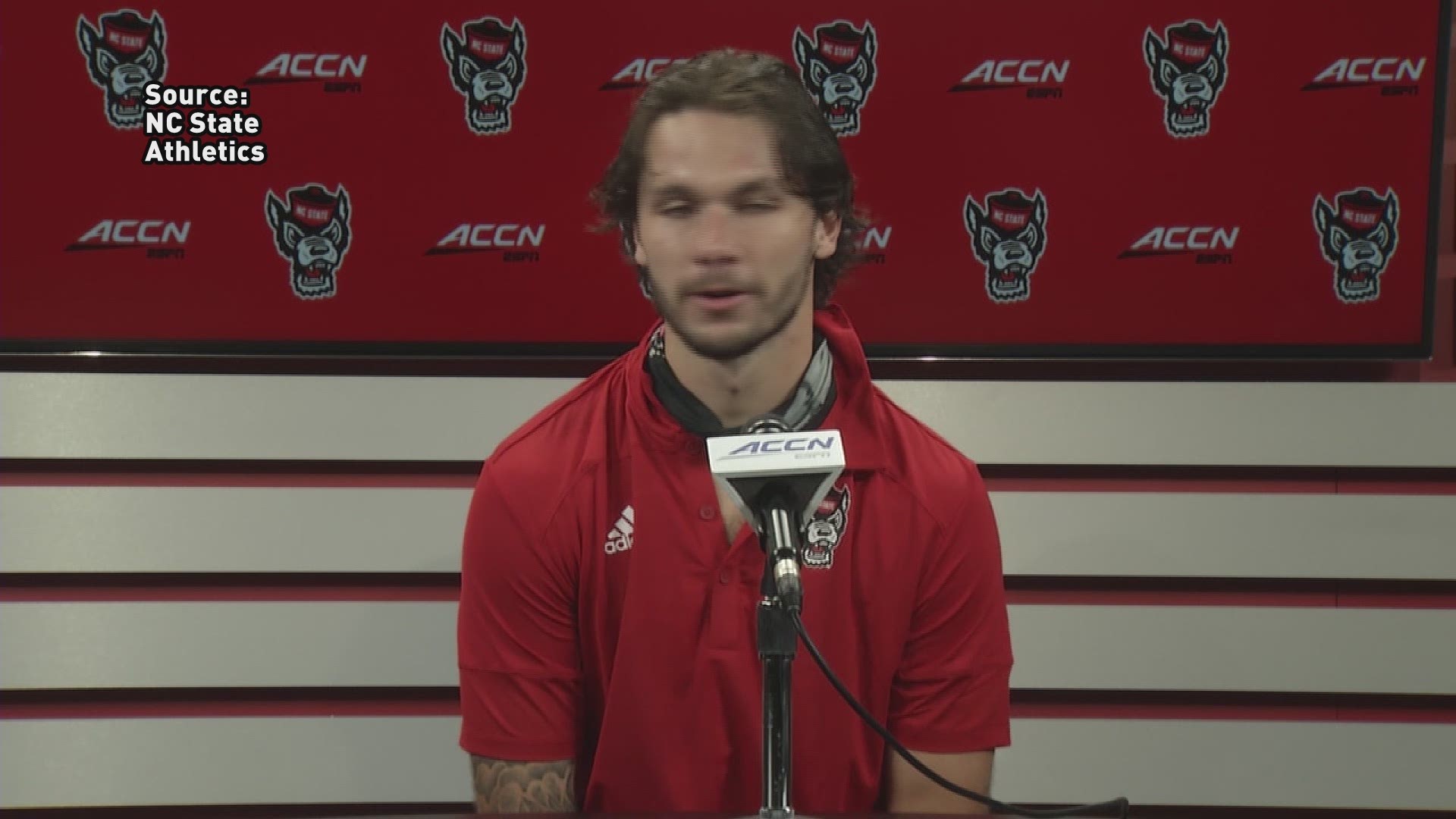 RALEIGH, N.C. - In the highest-scoring game in series history, the Wake Forest football team fell, 45-42, to NC State, snapping a three-game winning streak in the series.

Sophomore Kenneth Walker III, who ended the night with a career-high 131 rushing yards, found the endzone for the third time in the game with 9:12 remaining. This marked the third time in his Wake Forest career Walker has rushed for over 100 yards.

Additionally, Walker III became the fourth different player and second running back to rush for three touchdowns in a game.

Also on offense, the slot wide receiver continued to be a weapon for the Demon Deacons as Jaquarii Roberson and Taylor Morin combined for 127 yards on 10 catches against NC State (1-0, 1-0 ACC) on Saturday night. Roberson finished with a game-high seven receptions and 75 yards while hauling in his second career touchdown in the second quarter.

Graduate transfer Donald Stewart also made his presence felt in the passing game, grabbing a career-best five balls for 41 yards. He also sealed the edge for a Christian Beal-Smith touchdown run that finished off a 9-play, 75-yard drive in the second quarter.

Defensively, Traveon Redd led the team with a career-high 10 tackles. Carlos "Boogie" Basham Jr. extended his streak to 20 games with a tackle for loss. He sacked NC State quarterback Bailey Hockman in the second quarter. Basham Jr. now has a sack in nine of the last 11 games for the Demon Deacons.

•    The Wolfpack scored on their opening two possessions of the game to go up 14-0 at the 7:43 mark of the first quarter.

•    With the help of 37 rushing yards on the next possession by Kenneth Walker III, the Deacs worked themselves down to the five. From there, Sam Hartman connected with Jaquarii Roberson on a 5-yard pass to the back corner of the endzone.

•    After an NC State touchdown run at the beginning of the second quarter, the Demon Deacons closed out the first half with 14 unanswered points to tie it up at 21-21 heading into halftime.

•    Both of the Wake Forest touchdowns came on the ground with Christian Beal-Smith and Kenneth Walker III recording their first rushing scores of the season.

•    In the second half, the Wolfpack again had the first two scores, taking a 35-21 lead in the third quarter.

•    A 44-yard pick six from Ja'Sir Taylor brought the game back to a one-score game with 6:53 left in the third quarter.

•    The Deacs tied it at 35-35 with Kenneth Walker III's second score of the game. He ran off the right tackle and went untouched from 13 yards out.

•    After a field goal from the Wolfpack, the Demon Deacons again marched down the field and Walker III found the endzone for a third time, giving Wake Forest its first lead of the game at 42-38.

•    Ja'Sir Taylor's 44-yard interception returned for touchdown is the first pick six by the Deacs since Nasir Greer against Duke during the 2018 season.

o    Taylor has now intercepted a pass in three of the last five games. He recorded a pick against Duke and Syracuse to end the regular season in 2019.

•    This is just the fourth time in the Dave Clawson era the Demon Deacons have had four or more rushing touchdowns in a game.

•    Kenneth Walker III is one of just eight players nationally to have three rushing touchdowns this season. No one in the country has more than three this season.

•    "All the credit to NC State. They came out, they were ready, and they jumped to a 14-point lead. We always know that games against Big Four competition are going to be challenging. I was proud of the way we came back twice. From fourteen to nothing to 35-to-21, we really put ourselves in a position to win the game with Ja'Sir's pick-six. We had the ball and a chance to take the lead and we had a costly fumble, which we ended up holding them to a field goal but that turned out to be the difference in the game. We had a chance to win it at the end and we did not execute a two-minute drill. So, I thought in some ways we grew up today. I loved how we competed. I loved how we fought. I don't like how we played run defense. Obviously, if you give up 270 yards on the ground. We really struggled with third downs in the first half. We got that cleaned up in the second half. They outplayed us and deserved to win the game. We're getting better. I think we have the makings of a good football team but this team is a work in progress and we'll get there. We didn't play well enough tonight to beat a very enthused and energetic NC State team."

The Deacs return home to Truist Field to play No. 7 Notre Dame in the Duke's Mayo Classic at Truist Field on Sept. 26 at noon. The game will be broadcast on ABC.