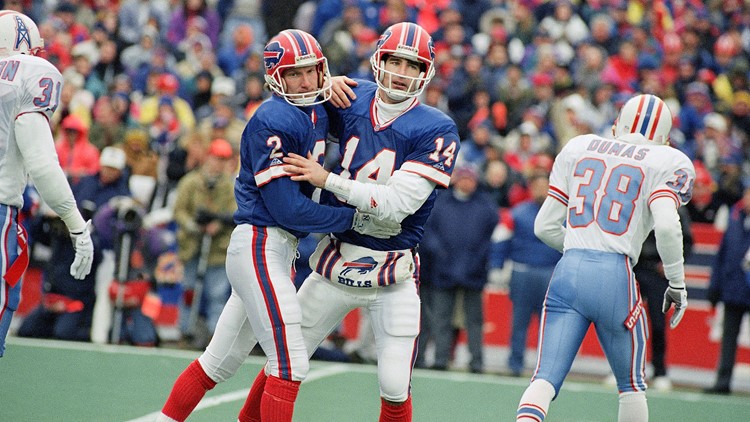 Sorry, Houston sports fans, you’re not gonna like this.

After the Houston Texans blew a 24-point lead to the Kansas City Chiefs in Sunday’s AFC divisional round 51-31 loss, we got to thinking: What’s the biggest blown lead in NFL postseason history?

It’s the 1993 Houston Oilers who hold the title.

Houston was dominating the Buffalo Bills in the AFC wild card, 35-3, in the third quarter. Then the Bills mounted a historic comeback and won 41-38 in overtime.

At left, in a Jan. 3, 1993, file photo, Buffalo Bills cornerback Nate Odoms gets a lift from teammate Henry Jones after intercepting a pass by Warren Moon of the Houston Oilers during an overtime period of an AFC wild-card game to set up Steve Christie's game winning field goal, in Orchard Park, N.Y. At right, Bills kicker Steve Christie, right, celebrates his game-winning field goal with quarterback Frank Reich. The Bills, down 32 points, beat the Oilers 41-38.
AP Photo/John Hickey, File

The game was dubbed “The Comeback.”

The Texans jumped to a 24-0 first-quarter lead against the Chiefs on Sunday before Kansas City scored 41 unanswered points.