After a rust belt road trip to forget, the Panthers are back at home Sunday where they've won 10 straight games. 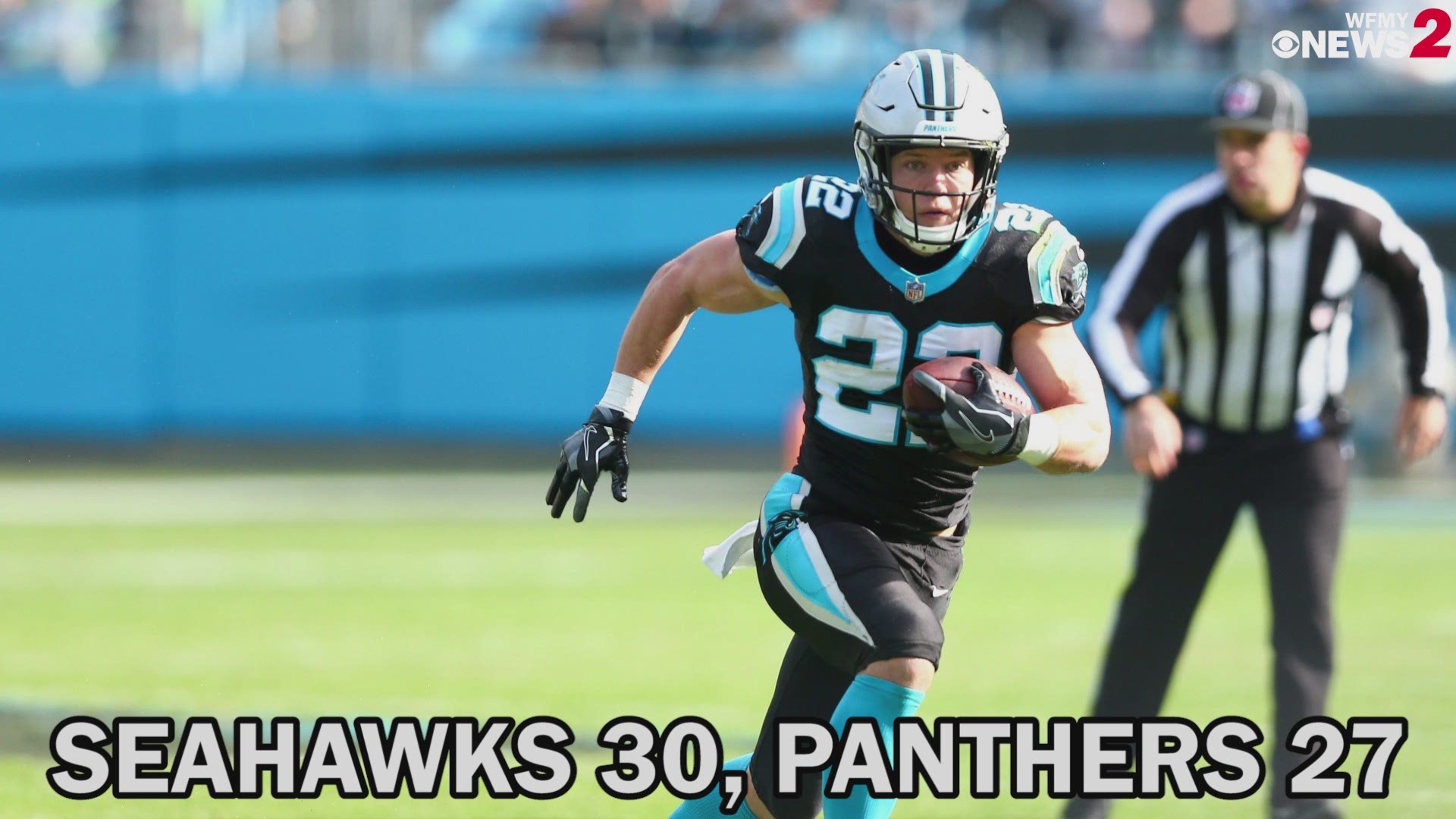 Christian McCaffrey becomes the first player in franchise history with over 100 yards rushing and 100 yards receiving.https://t.co/SomizJveuA

A message from Cam pic.twitter.com/500DFILAgm

Sebastian Janikowski nails a 31-yard field goal and Seattle prevails 30-27. The kicking game dooms the Panthers again, as Graham Gano couldn't replicate his heroics from earlier in the season. The Panthers entered the game as the last wild-card playoff team and now they're on the outside looking in.

On 3rd and 5, Wilson finds Lockett for a massive completion down to the 10-yard line. Lockett sunk behind the defense. The Panthers miss Donte Jackson big time. 45 seconds left.

Moore catches a 3-yard pass and Gano will attempt a 52-yard field goal for the lead with 1:42 left. It's wide right. Gano with another rough week. Seattle gets the ball back with 1:40 left at its own 42.

Panthers get across midfield after a dart from Newton to DJ Moore. We're at the 2-minute warning.

On 3rd and 3, Wilson throws it up under pressure. It's incomplete. Seattle's going for it on fourth down. Wilson finds Moore for the touchdown. A perfect throw over the cornerback's shoulder. We're tied at 27 with 3:26 left. What a game.

Eric Reid with the nice shoestring tackle of Carson behind the line of scrimmage. It's a 3-yard loss. Panthers are flagged for a neutral zone infraction on the next play.

McCaffrey with the touchdown! 27-20! 6:57 left. The second-year running back from Stanford has two touchdowns, 125 yards rushing and 104 yards receiving today.

McCaffrey with two huge runs and the Panthers are at the goal line! McCaffrey now has 241 total yards today.

Wilson's throw to the end zone on third down is incomplete. Seattle ties it on the field goal. 9:27 left to play.

Seattle gets the first down at the 12. Kuechly with another big tackle on first down and playing all over the field on this drive.

On 3rd and short from the 15, Seattle gets four yards. They're going for it on 4th and 1. The initial spot looks like he got the first down.

Carson hit behind the line of scrimmage and ball comes out, but he's ruled down. Panthers think they recovered a fumble. There's a break in the action while they review the play.

Luke Kuechly with the nice tackle in the backfield, but he's flagged for a face mask.

Here are some great photos of today's game:

Seattle only with 64 yards rushing today, which is way down from their 154-yard average. That said, Carson breaks out with a 13-yard gain on first down.

The Panthers enter their goal line formation and McCaffrey is in for the touchdown! It's 20-17 Carolina late in the third quarter. A huge response drive there by Carolina. Newton completed all four of his throws on that drive.

A pass interference call in the end zone will give it to Carolina at the 1!

Newton gets a first down on a quarterback draw. Newton finds McCaffrey for a screen for a huge gain. McCaffrey fumbles it, but the Panthers recover.

It's ruled a touchdown after review. Seahawks go up 17-13 with 6:45 left in the third quarter.

Panthers stop Carson in the backfield on 2nd and long. On 3rd and 9, Wilson finds Tyler Lockett on the goalline. He's ruled down at the 1. The Seahawks are challenging that it should be a touchdown. This would be Seattle's first lead of the game if it's overruled.

On 3rd and 12, Wilson finds David Moore wide open for a huge gain. Bradberry was beat on the coverage for Carolina. Seattle now in the red zone.

Carson twirls up in the air on an amazing play where he did a full flip. Highlight-reel effort there with some acrobatics.

Jackson confirmed not to return today.

Cam throws into double coverage in the end zone and it's picked off. An ill-advised throw by Cam there and another scoring opportunity missed.

DJ Moore draws a pass interference on Tre Flowers and Panthers get the first down back.

McCaffrey gets a first down on 3rd and 1, but a penalty brings it back. Holding called on Carolina. Chris Clark is flagged. Negates a first down and makes it third and 5.

Cam breaks free on 3rd and 8 for a 26-yard burst. Newton found a seam in the offensive line. McCaffrey gets another double-digit gain and the Panthers are inside the Seattle 30.

Cam throws his first incompletion of the game to start the second half.

Cam was 14 of 14 passing in the first half, a new franchise record.

Another short pass to McCaffrey is stopped on an open field tackle. Gano hits a short field goal to give Carolina a 13-10 lead at halftime.

On 1st and goal at the 10, McCaffrey is snuffed out on a screen pass for a 3-yard loss.

Newton finds McCaffrey over the middle for a big gain. McCaffrey with a great route to fake out the defensive back and get open.

Seattle gets a 1-yard touchdown run and we're tied at 10. Chris Carson takes it in. Wilson was 3 of 3 on that drive for 61 yards.

Wilson gets a first down on a zone read play and the Seahawks are looking for an answer.

Newton finds Samuel in the end zone for the touchdown! It's 10-3 Panthers after the extra point. A 53-yard drive ends in points on a big possession.

A Curtis Samuel end around gets the Panthers into the red zone!

On 3rd and 18, Seattle gets a few yards, but have to punt. Panthers take over near midfield.

Wilson is sacked inside the 5! Shaq Thompson gets in on the sack and its 2nd and 18.

Panthers retain possession after a McCaffrey fumble on a read option. McCaffrey is stopped on 3rd and 1 and the Panthers will punt. A missed opportunity for the Panthers there.

On 3rd and 8, Wilson just misses Doug Baldwin in the end zone for a touchdown. The throw is a bit high. Seattle ties the game at 3 on a field goal.

Another injury blow for the Panthers on offense. Damiere Byrd is out for the rest of the game.

Seattle facing third and 10 at the Carolina 30. Wilson finds tight end Nick Vannett in space for the first down.

Seattle moving it downfield, taking advantage of Donte Jackson's absence. Linebacker Thomas Davis bats the ball down on first down.

Christian McCaffrey stopped behind the line. Panthers will kick the field goal. It's good. 3-0 Carolina with 2:11 left in the first quarter.

And the Panthers are on the board. Graham Gano gets the scoring started with a 26-yard FG. 3-0 Carolina. #SEAvsCAR @WFMY

DJ Moore with the big catch and Jarius Wright with a 25-yard reception! Panthers with some misdirection to confuse Seattle and they're in the red zone.

Wilson throws it out of bounds on third and long. Seattle will punt.

Donte Jackson injures his quad on Seattle's first drive of the game. He's questionable to return.

Panthers go for it on 4th & 3 and Cam is stopped short. Big stop for Seattle. They're reviewing the spot now. The call stands.

Aggressive play to start the game for the Panthers. They go for it on 4th down inside the 5. Cam Newton is stopped short on the QB keeper. Seattle's ball. #SEAvsCAR

James Bradberry with the sack of Russell Wilson to force a punt!

Seattle gets the ball first. Luke Kuechly with the first tackle of the game.

1 / 13
Panthers linebacker Thomas Davis has the team's logo on his helmet visor.

After a rusty road trip through the rust belt, the Panthers are back at home Sunday where they've won 10 straight games. After a thumping against Pittsburgh, Carolina had plenty of shoulda-woulda's in a 20-19 loss at Detroit in Week 11. The Lions, just 3-6 and heavy underdogs, led for much of the game and got a late touchdown in the fourth quarter to take the lead for good.

Veteran kicker Graham Gano, in the midst of an otherwise impressive season, missed a 34-yard field goal and an extra point. Given Gano's struggles, coach Ron Rivera elected to go for two points after a late touchdown to pull the Panthers within a point. Cam Newton's pass on a two-point conversion late in the game was too high, and the Panthers dropped two straight for the first time this season.Newton had a solid game, throwing for 357 yards and three touchdowns, but lamented the poor throw on the two-point try."I gotta make that play," Newton said. "I wouldn't have wanted it any other way. He trusted in me, and I've got to uphold my end of the bargain. I didn't do that. I let this team down, and I've just got to be better."

Some notes in advance of Sunday's clash: