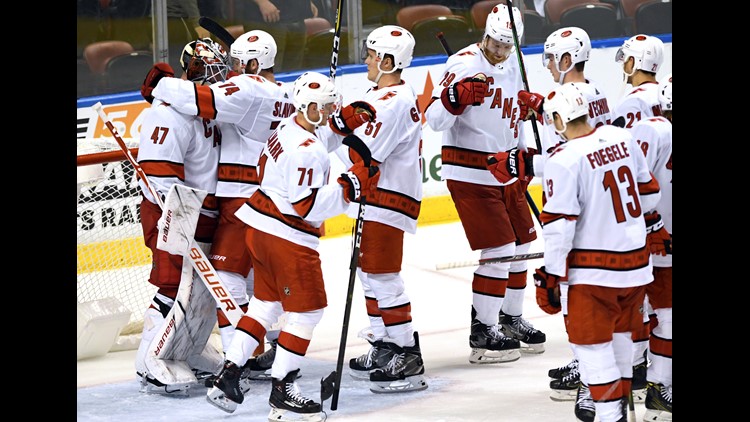 Photo by: AP
Carolina Hurricanes goaltender James Reimer (47) celebrates a 6-3 victory with teammates over the Florida Panthers at the end of an NHL hockey game Tuesday, Oct. 8, 2019, in Sunrise, Fla. (AP Photo/Jim Rassol)

Teuvo Teravainen and Jordan Staal each had a goal and an assist for Carolina, which scored four times in the first period and opened a 5-0 lead after 21½ minutes. Dougie Hamilton also scored, and Sebastian Aho added an empty-net goal. James Reimer stopped 47 shots against the team that traded him last summer.

Andrei Svechnikov and Haydn Fleury each had two assists as the Hurricanes matched the 4-0-0 start by the Hartford Whalers in 1995-96, before the club moved to Carolina.

Sergei Bobrovsky allowed four goals on 14 shots before being replaced by Sam Montembeault to start the second period. Montembeault finished with 19 saves.

Dzingel's second goal extended Carolina's lead to 5-0 at 1:31 of the second. The Panthers got on the board when Weegar flipped in a loose puck from in front at 3:51.

Aho scored into an empty net with 1:19 remaining.The Hurricanes got four goals in a span of less than 12 minutes during the first period.

Staal gave them a 1-0 lead when he poked in the puck from in front after it deflected off a defenseman's skate at 6:48. Teravainen made it 2-0 when he deflected in a point shot from Fleury at 11:04.

Hamilton stretched the advantage to 3-0 when he wristed a pass from Svechnikov into the net at 15:37. Dzingel's power-play goal with 1:46 left in the first made it 4-0.