Simone Biles shows the sportsmanship of a true athlete

Biles secured her team with hugs, cheers and high fives as they competed in the women's gymnastic team final. 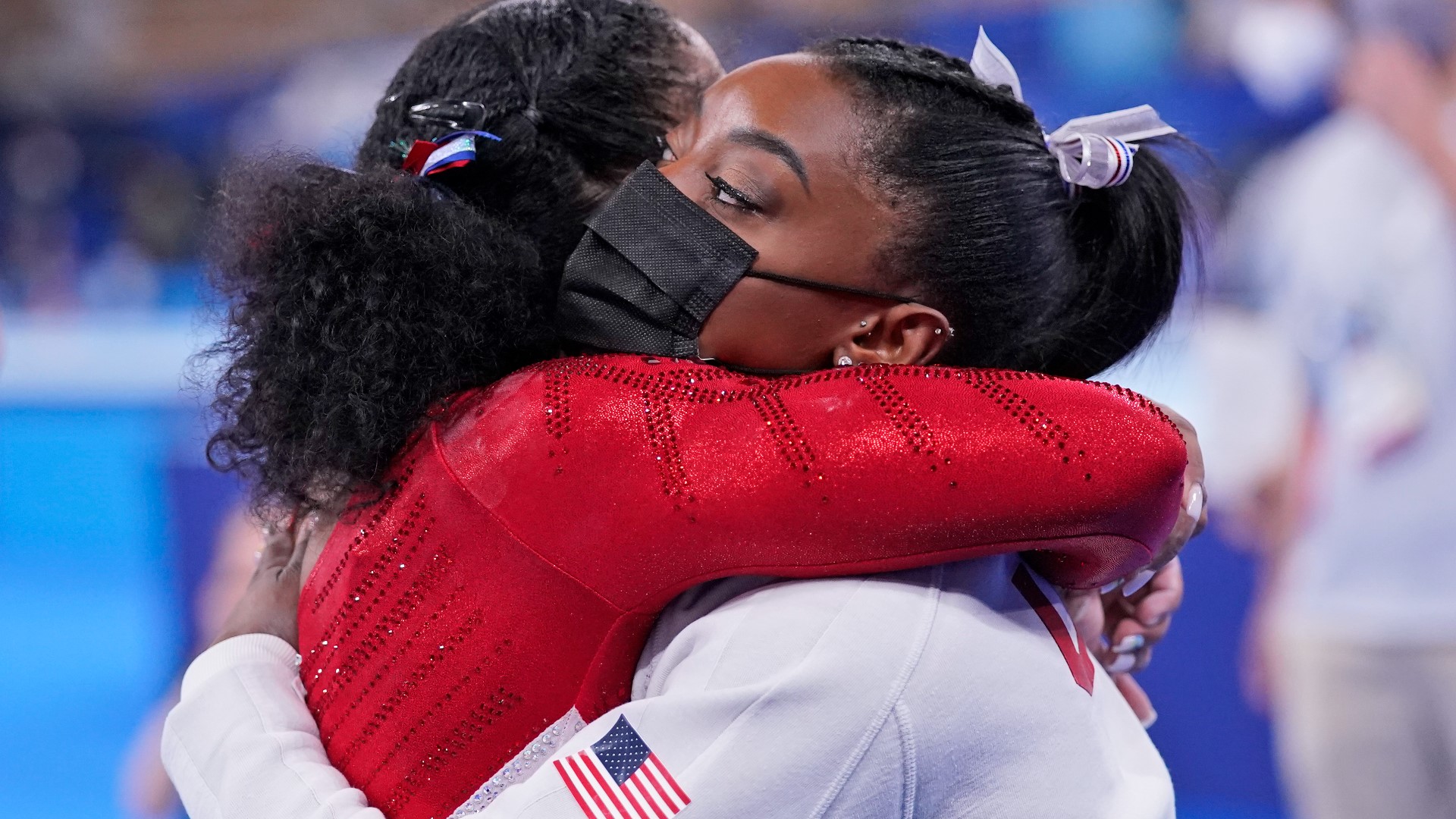 ATLANTA — Simone Biles showered her teammates with hugs, cheers and high fives from the sidelines as her teammates competed in the women's gymnastics team final.

The team, who were searching for a third consecutive gold medal at the 2020 Tokyo Olympics, consists of Jordan Chiles, Sunisa Lee, Grace McCallum and Biles.

Here's what we know:

Biles said she withdrew from the competition to protect herself and her team as she wasn't in the right' headspace'.

"I didn't want to go into any of the other events second-guessing myself," Biles said. "So, I thought it would be better if I took a step back and let these girls go out there and do their job."

On Thursday, Biles is set to defend her Olympic title in the all-around women's gymnastics final and said she would regroup on Wednesday before deciding whether to continue.

Soon after the announcement, Team USA's gymnastics team put out an official statement on Biles' condition stating her exit was due to a medical issue. While many speculated an injury, the tweet assured Biles would be assessed daily ahead of her remaining competitions.

Official statement: "Simone Biles has withdrawn from the team final competition due to a medical issue. She will be assessed daily to determine medical clearance for future competitions."

Thinking of you, Simone! pic.twitter.com/QA1GYHwWTv

Chiles took over Biles' beam and uneven bars performance. The three girls grappled with defending their Olympic title without Biles, who's considered the greatest gymnast of all time.

Despite her exit, Biles remained supportive of her teammates. She hugged, high fived and cheered on the girls as they performed in the gymnastics final. Biles' endearingly helped carry and move equipment showing the sportsmanship and class of a true athlete.

*THIS* is a team player.

Flowing waves of support rushed in on social media following the announcement of the star gymnast. Many twitter users sent get well wishes, supportive words and overall positive messages for the gymnast.

One Twitter user was among some of the reactions recognizing the amount of pressure placed on Biles. Others tweeted in support of Biles choosing to take care of her health.

I am actually crying thinking about the pressure #SimoneBiles is put under. She is so incredibly talented and has persevered throughout her entire life. She deserves nothing but happiness. We love you Simone ❤️🤍💙 pic.twitter.com/xKvgw7vJ72

God bless the great Simone Biles. And that is all. 🙅🏿‍♀️❤️🙏🏿 pic.twitter.com/MqJGEGJFLQ

If Simone Biles says withdrawing from the team final was best for HER, than we have no choice but to support. She still the GOAT 👊🏾 #Olympics pic.twitter.com/CKaYB3moJV

A day before the competition, Biles posted an Instagram picture with a caption talking about how she often feels the weight of the world is on her shoulders.

"Prelims ☑️ now to prepare for finals," The star posted on Instagram. "It wasn’t an easy day or my best but I got through it. I truly do feel like I have the weight of the world on my shoulders at times. I know I brush it off and make it seem like pressure doesn’t affect me but damn sometimes it’s hard hahaha! The Olympics is no joke! BUT I’m happy my family was able to be with me virtually🤍 they mean the world to me!"