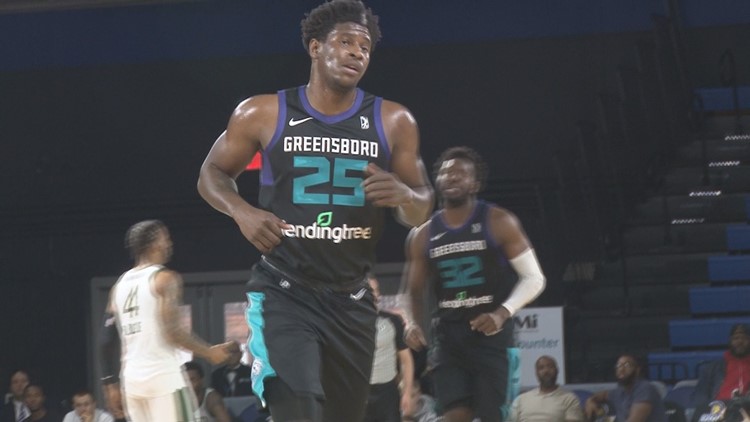 Photo by: WFMY News 2
Jaylen Barford continued his hot shooting off the bench with 31 points on 11-of-20 shooting.

GREENSBORO, N.C. – The Greensboro Swarm, the NBA G League affiliate of the Charlotte Hornets, erupted for a franchise record 140 points in a decisive, 140-117, victory over the Wisconsin Herd on Wednesday at the Fieldhouse at the Greensboro Coliseum Complex. En route to the milestone, the Swarm (7-8) set its single-game record for most three-pointers made by going 24-for-51 from long range.

Jaylen Barford continued his hot shooting off the bench with 31 points on 11-of-20 shooting. Barford has scored at least 20 points in three straight games. Dwayne Bacon and Devonte Graham, on assignment from the Hornets, combined for 41 points and both nearly recorded a triple-double. Bacon’s 21 points, 10 assists and seven rebounds was nearly identical to Graham’s 20 points, 10 assists and seven rebounds.

Chinanu Onuaku had a huge game as well, as he was responsible for just the sixth 20-point, 20-rebound performance in the G League this season. The Maryland native had 20 points, 21 rebounds, six assists and a steal in 28 minutes.

For Wisconsin (2-13), Christian Wood had a game-high 34 points to go with 12 rebounds, two assists and two steals. Travis Trice also had a double-double, coming up with 16 points and 10 assists in 33 minutes. Trevon Duval (16 points) and Robert Johnson (13 points) had valuable as a reserve.

It was all Greensboro from the start, as a 39-point first quarter jump started the scoring. The Swarm held a, 79-59, lead at the half and would eventually hold a 31-point advantage in the second half. Greensboro shot 53 percent as a team, including 47 percent on long range.

Final stats can be found here.