After surviving a toxic relationship, she couldn't talk... but she could sing

“I am cracked and broken… but I am here. I am not going anywhere. I’m going to stand up and use my voice to tell my story and to sing my story." 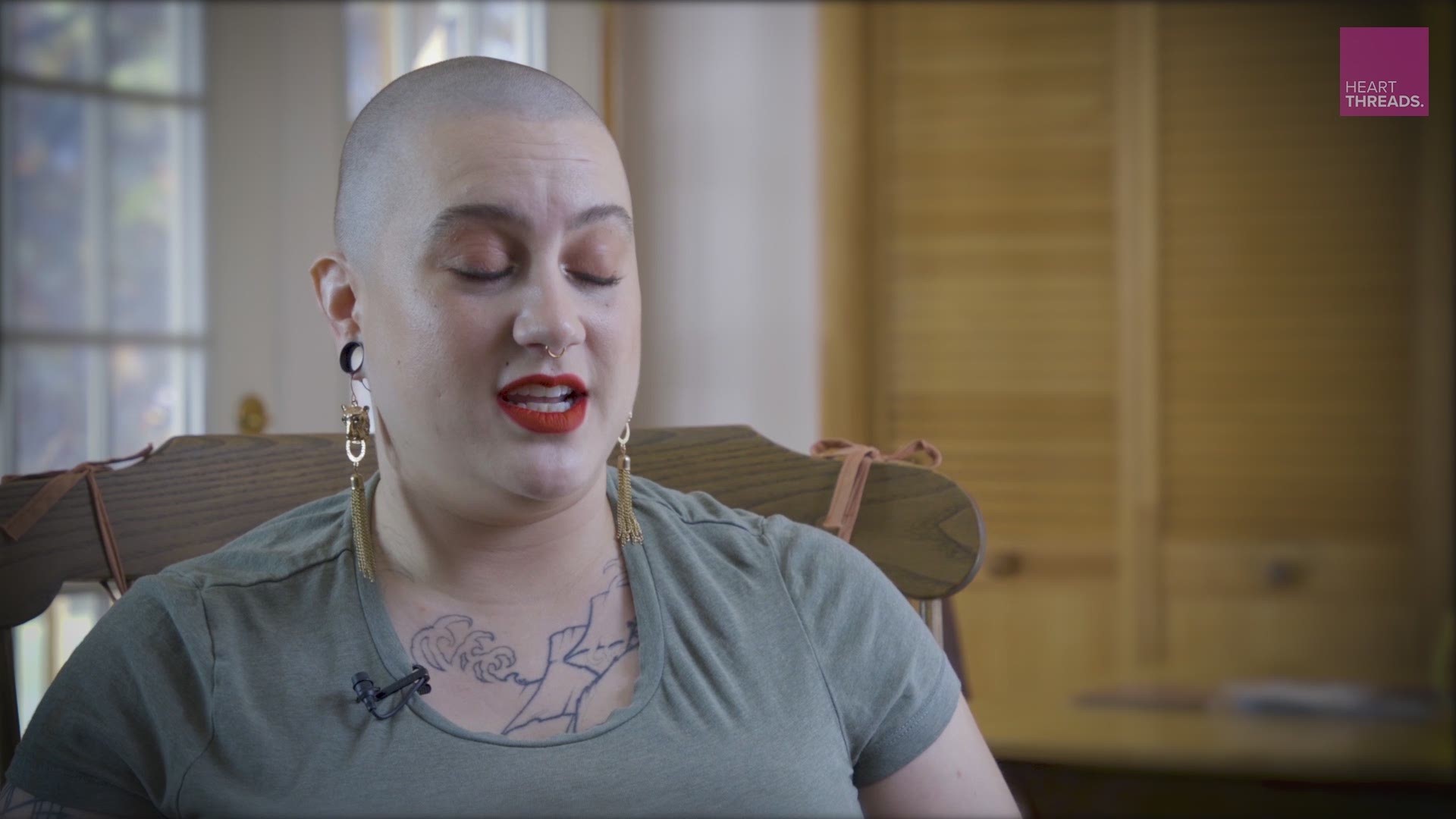 MILLERSVILLE, Md. — Like many little girls, L. Rodgers was obsessed with the Little Mermaid upon its premiere in 1989.

She would transform into the beloved, red haired Disney princess by singing her songs all day.

“My dad was trying to take a nap and he came out and said to my mom, ‘Lindsay has been playing that [movie] all day. You have to turn it off,’” Rodgers recalled. “She goes, ‘That’s not the movie, that’s Lindsay.’”

With the discovery of her stunning voice, Rodgers’ parents helped her pursue her passion by enrolling her in classes at The Peabody Institute, an acclaimed musical school. She was 6 and continued until she was 16.

During those 10 years, she fell in love with musical theatre and dreamed of pursuing a career in New York City. In her own words, Rodgers was ready to go, ready to smile and ready to sing.

After high school, she made her dream a reality by leaving Maryland for the big city and enrolling at The American Musical and Dramatic Academy. From there she secured off-Broadway gigs, including one musical where she moved to Alaska to perform for a summer.

“Between me graduating and getting the role, I had got a boyfriend as well,” Rodgers said. “In Alaska, you really do feel disconnected… so I connected with him and we got closer. It seemed to be a good budding relationship. It was my first serious relationship.”

After her musical wrapped in Alaska, Rodgers invited her boyfriend to move back to New York City with her. When he accepted, she was thrilled. She envisioned him getting a job and her auditioning. But when he did get a job, new friends and coworkers came along. That’s where Rodgers said everything began escalating.

Rodgers remembers her boyfriend and his friends staying up until early morning hours discussing extravagant plans and smoking weed.

“Slowly it became him trying to act more suave like them,” Rodgers said.

According to Rodgers, he began asking her to change her appearance and behavior. He paid for her to have certain types of make-up and clothes.

But as they kept up a certain image, funds ran low.

Rodgers said she would eat spoonfuls of peanut butter for dinner. When the hunger and lack of money became intolerable, her boyfriend had an idea.

“He asked me to have sex with somebody for money,” Rodgers said. “It was very much like he was brainstorming like, ‘We could do this… or this… or you know what so and so has told me about what his girl has done is it’s real easy… and somebody is coming over in an hour so you better get ready.’”

Rodgers now realizes she was so brainwashed, she knew that saying no was not an option. Within the coming weeks, she was subjected to sell her body more often leading her to eventually feel inhuman.

The only way Rodgers could soothe herself was by her voice.

She would wait until she was completely alone and sing the Beatles’ “Blackbird.”

“I would make sure nobody was around because that was the thing I was not giving to anybody else. That’s the one thing. You can have everything else but it was like The Little Mermaid from when I was 3, you cannot have my voice,” Rodgers said.

What followed was a year of Rodgers selling her body more often. During that time, there was a moment of retaliation where she left and lived on the streets. But the brutal cold forced her to eventually return.

Change came when Rodgers said she received a phone call from their leasing office informing her that they owed $15,000 in rent. According to Rodgers, her boyfriend had not paid rent in an entire year.

“I thought, ‘That’s my opportunity. I want out,’” Rodgers said.

She was 22 and returned to her childhood room in Maryland with purple walls, purple carpet and purple drapes.

In what could be said was denial, Rodgers continued dating her boyfriend as he had returned to Maryland as well. She didn’t tell anybody of what he had subjected her to in making money for their life in New York.

“I don’t know how brainwashed one can be… but I kept going back until one day when he called me and said, ‘I need you to come over,’” Rodgers said.

Rodgers claims she went to his house and found him violently enraged. His screaming and throwing of beer bottles caused Rodgers to have clarity: she needed to leave. But as she made her way to the front door, she said he ran to the basement where he kept his guns.

“I didn’t know what else to do because if I ran out the front door, I didn’t have a car,” Rodgers said.

She called her father who rushed over in his truck. She ran out and leapt in.

“The last image I have of that house and that man was looking out the window and seeing him at the front door with his hand down [behind his back],” Rodgers said.

She never spoke to or saw him again.

But the pain inflicted simmered within Rodgers. At the time she didn’t realize she had developed post-traumatic stress disorder and issues with co-dependency. She struggled leaving her parent’s home, let alone opening up to anyone about what had occurred.

RELATED: This barber opened her own all-female run shop to help promote inclusivity

“For me to start opening my mouth and start talking, I had to sing first. I had to put it in that format first. That was the only way to open up,” Rodgers said.

For the first time in her life, Rodgers began writing her own songs. The first was the aptly named “Caged Bird.”

“I started talking and started telling people and it just naturally flowed out of me and it became very natural. Since that, it’s kind of grown and grown and grown and now I feel so calm and comfortable standing on a stage with a microphone being able to sing the songs and tell the stories behind them,” Rodgers said.

To heal, Rodgers used the power of music. She transformed from Lindsay into her stage name, L. Rodgers.

In that, her songs have brought her a career, a platform to help others and love.

Since starting her songwriting and singing career, Rodgers who previously identified as bisexual, now identifies as lesbian and has married her wife who fully supports Rodgers’ voice in its magnificent power of song and strength. She hopes her music can help others take away a powerful message.

“It’s a triumphant message of survival and persistence, being vulnerable but brave,” Rodgers said. “I am cracked and broken and put together with paste and Gorilla Glue in my own way… but I am here. I am not going anywhere. I’m going to stand up and use my voice to tell my story and sing my story.”