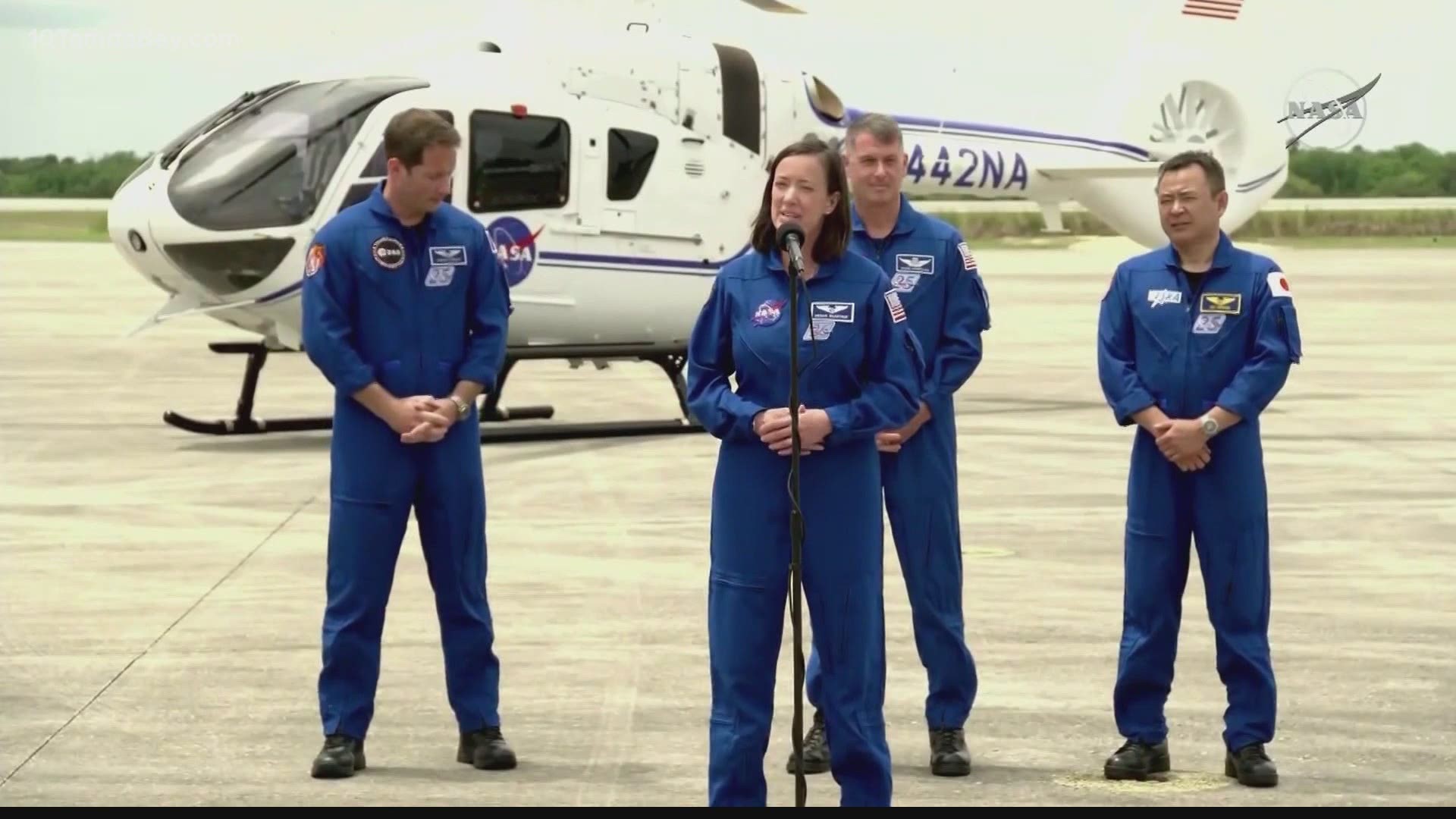 CAPE CANAVERAL, Fla. — NASA and SpaceX have officially launched the third commercial crew mission from U.S. soil. Friday's feat also marks the third launch of the program in less than a year.

The four-person crew of NASA astronauts Shane Kimbrough and Megan McArthur, along with JAXA astronaut Akihiko Hoshide and ESA astronaut Thomas Pesquet are now making their way to the International Space Station.

Crew-2's launch went off without a hitch at 5:49 a.m. with the astronauts spanning three countries getting a ride in a previously flown Crew Dragon spacecraft on top of a flight-proven rocket.

Next comes the long trek to the orbiting laboratory. NASA is targeting a 5:10 a.m. arrival and a 7:45 a.m. welcome ceremony on April 24.

During their mission, the crew will conduct science experiments, complete maintenance on the ISS, and even overlap with the Crew-1 astronauts.

Here's what you need to know from Friday's launch:

8:01 a.m. April 23: Checking in from space! A camera aboard the Dragon capsule captures an update for space lovers. The crew is a couple of hours into their flight and says they are making their second lap around the Earth.

6:06 a.m. April 23: After separating from the second stage, spaceflight commander Shane Kimbrough shares this message: "Glad to be back in space for all of us."

"Glad to be back in space for all of us." - @Astro_Kimbrough. The second stage has separated, and the @SpaceX Crew Dragon spacecraft with four astronauts aboard is in orbit, and on the way to the @Space_Station. pic.twitter.com/ygzlgtVjWd

6:01 a.m. April 23: Less than 10 minutes later, Falcon 9 lands back on Earth on SpaceX's "Of Course I Still Love You" droneship. The feat marked the 80th landing of an orbital class rocket booster.

5:49 a.m. April 23: We have liftoff! The four astronauts from three countries that make up Crew-2 have begun their trek to the International Space Station.

3.. 2.. 1.. and liftoff! Endeavour launches once again. Four astronauts from three countries on Crew-2, now making their way to the one and only @Space_Station: pic.twitter.com/WDAl8g7bUK

Astronauts and SpaceX teams on the ground are thanking each other for all their hard work leading up to launch.

"We wish you a great mission, good luck, and enjoy the ride." - The @SpaceX team speaks with the Crew-2 astronauts as we count down the remaining minutes until liftoff at 5:49am ET. pic.twitter.com/NfIoYh0lT0

5:20 a.m. April 23: The International Space Station can be seen in the skies above the Kennedy Space Center.

That bright object in the night sky over @NASAKennedy is the @Space_Station, seen during the countdown to liftoff of NASA's SpaceX Crew-2 mission. Sign up to receive alerts for station sightings near you: https://t.co/MGJIkympUx pic.twitter.com/ZbMyRjN9fL

🚀 The access arm has been retracted and teams are "GO" for fueling.

4 a.m. April 23: Going through the pre-launch steps can take quite some time, but Crew-2 is ahead of schedule and passing the time by playing rock, paper scissors.

The crew is going through their steps ahead of schedule and are passing the extra time aboard the Crew Dragon spacecraft with a couple of rounds of the game. pic.twitter.com/1MUSHQUnyi

3:40 a.m. April 23: The side hatch to Crew Dragon Endeavour is closed and leak checks are beginning.

3:20 a.m. April 23: The astronauts are inside the capsule while communication checks are underway.

3:14 a.m. April 23: Crew-2 astronauts have hopped in their custom Teslas and are on their way to the launchpad. Each astronaut typically has a playlist of music they listen to get hyped up ahead of launch.

"Good luck Shane, Megan, Aki, and Thomas! Go Crew-2!" As the convoy with NASA's @SpaceX Crew-2 astronauts drives to the pad at @NASAKennedy, some of those who helped make today's launch possible cheer them on: pic.twitter.com/CWaRrHYL8V

2:33 a.m. April 23: The four Crew-2 astronauts take part in the staple moment of exiting the Neil Armstrong Operations and Checkout Building to wave goodbye and see their families one last time before launch.

Credit: NASA, via AP
In this photo provided by NASA, from left to right, European Space Agency astronaut Thomas Pesquet, NASA astronauts Megan McArthur and Shane Kimbrough, and Japan Aerospace Exploration Agency (JAXA) astronaut Akihiko Hoshide, wearing SpaceX spacesuits, are seen as they prepare to depart the Neil A. Armstrong Operations and Checkout Building for Launch Complex 39A to board the SpaceX Crew Dragon spacecraft for the Crew-2 mission launch, Friday, April 23, 2021, at the Kennedy Space Center in Cape Canaveral, Fla. Four astronauts will fly on the SpaceX Crew mission to the International Space Station scheduled for launch on April 23, 2021. (Aubrey Gemignani/NASA via AP)

2:03 a.m. April 23: Kimbrough, McArthur, Hoshide and Pesquet are suiting up ahead of launch. The spacesuits are customized for each astronaut.

The four Crew-2 astronauts — @Astro_Kimbrough, @Astro_Megan, @Thom_Astro, & @Aki_Hoshide — are suiting up for today's launch. See if you can spot @Astro_Jessica, a member of the pad closeout team, providing crew support: pic.twitter.com/HX5CMV5FW0

April 22: What's on the menu? Crew-2 is sharing a look at their last dinner in quarantine ahead of launch tomorrow.

6 months of space food after this! Thank you to the @NASA_Johnson and @NASAKennedy food lab and food services staff that have been keeping us healthy and well-fed during quarantine. The next time I post about food it will be floating! pic.twitter.com/GOvU2u8Xwy

April 22: SpaceX reports all systems and weather are looking good for Friday's launch.

All systems and weather are looking good for Falcon 9’s launch of Dragon with four astronauts on board. Webcast will go live tomorrow at ~1:30 a.m. EDT → https://t.co/bJFjLCzWdK pic.twitter.com/TE6NB3nOJX

April 22: Here's what astronaut Shane Kimbrough plans on listening to Friday morning during the drive out to the pad.

What songs would you listen to before you launch to space? Here’s my driving out to the launch pad playlist. Listen along on your own when you see us driving to our rocket tomorrow on @NASA TV! pic.twitter.com/SAa0UmD2a5

April 21: Want to learn more about the Crew-2 astronauts? You're in luck. NASA dropped this video with the third commercial crew.

Meet your Crew-2 astronauts, launching to the @Space_Station this Friday aboard the @SpaceX Crew Dragon: https://t.co/YVKzRVXU8V pic.twitter.com/Vl9C4WSPhx

April 21: NASA, SpaceX officials share that launch has been pushed back to 5:49 a.m. ET on April 23 due to "unfavorable weather conditions."

While Thursday's launch was originally given an 80-percent "GO," conditions along the flight path and recovery area, in the unlikely event of a launch escape, also come into consideration.

Live coverage begins at 1:30am ET (5:30 UTC), continuing through Crew Dragon's arrival at the station April 24.

April 21: If you want to rock out with astronaut Megan McArthur ahead of liftoff you're in luck! She shared her playlist for the drive out to the pad.

We're at L-1! On launch day, we'll be driving out to the pad about now. If you want to rock out with me, here's what I'll be playing:@foofighters Learn to Fly@ChiliPeppers Give it Away@OzzyOsbourne Crazy Train@Metallica Enter Sandman@GreenDay Waiting
What would you play?

April 20: The final walk the astronauts will take is along the crew arm which was extended at Launch Complex 39A Tuesday.

"The crew arm is extended, exactly where the crew will walk across and get into their vehicle to go to space." — Benji Reed of @SpaceX describes aerial views of the Falcon 9 rocket and Crew Dragon Endeavour spacecraft at @NASAKennedy's historic Launch Complex 39A. pic.twitter.com/5ioAf8Tqdo

April 18: NASA and SpaceX's Crew-2 is another step closer to launch after Kimbrough, McArthur, Hoshide and Pesquet participated in a dress rehearsal.

April 17: Static fire test of Falcon 9 is completed by SpaceX.

April 16: Wheels down in Florida! The crew is officially on the ground at Kennedy Space Center.

The Crew-2 astronauts have arrived to Kennedy Space Center! 🛬@astro_kimbrough, @Astro_Megan, @Aki_Hoshide and @Thom_astro just landed and they are ready to begin final preparations for liftoff! Join us as the crew answers questions about their mission: https://t.co/A9sbAYbCl3 pic.twitter.com/3ugBjxYTdR

April 16: ESA astronaut Thomas Pesquet shares a video of the Falcon 9 rocket and Crew Dragon from above as the crew plane arrives in Florida.

We flew around our launchpad 39a before landing @nasakennedy. Landing and then liftoff in 6 days. 🛬🚀 pic.twitter.com/vb5e3S7dEX

April 15: Flight Readiness Review for the launch of Crew Dragon is deemed "GO" to proceed.

The Flight Readiness Review for the launch of Crew Dragon to the @Space_Station has concluded, and @NASA and @SpaceX are GO to proceed with launch on April 22!

Tune in at 7 p.m. ET for a media teleconference: https://t.co/zGwVqyNq26 pic.twitter.com/0l9n1iNWof

Welcome back to Kennedy Space Center, Crew Dragon! 🐉@SpaceX's Crew Dragon Endeavour made its way from Cape Canaveral Space Force Station to the Launch Complex 39A integration hangar this week in preparation for the Crew-2 mission launching on April 22: https://t.co/xnafWSdtw4 pic.twitter.com/Ob9iZCDjjr

April 8: Crew-2 astronauts enter their quarantine period leading up to launch day. Quarantining is standard practice for astronauts prior to liftoff, regardless of the pandemic.

The Crew-2 astronauts entered quarantine on April 8 in preparation for their flight to the @Space_Station.

Spending the final weeks before launch in quarantine will help ensure the crew is healthy, protecting themselves and those already on the station: https://t.co/CpZSNlE5wj pic.twitter.com/bHilT96SOI

April 7: The crew gets the chance to see its Dragon capsule and adds their initials to it for good luck.

Two weeks ago in Florida we got to see our Dragon capsule and the booster that will get us into space. The best part of these days was meeting the people who work so hard every day to make sure we'll get there safely. THANK YOU for all you do. Honored to be on this team with you. pic.twitter.com/DuXZjdYZdh

RELATED: SpaceX wins $2.89 billion NASA contract to land US astronauts back on the Moon

RELATED: Here's how NASA treats astronauts who get sick in space