Copperhead or corn snake? How to tell if that snake you're staring down is venomous

In the springtime, they slithered out from a long winter's nap to soak up the sun, and now those venomous snakes are reproducing 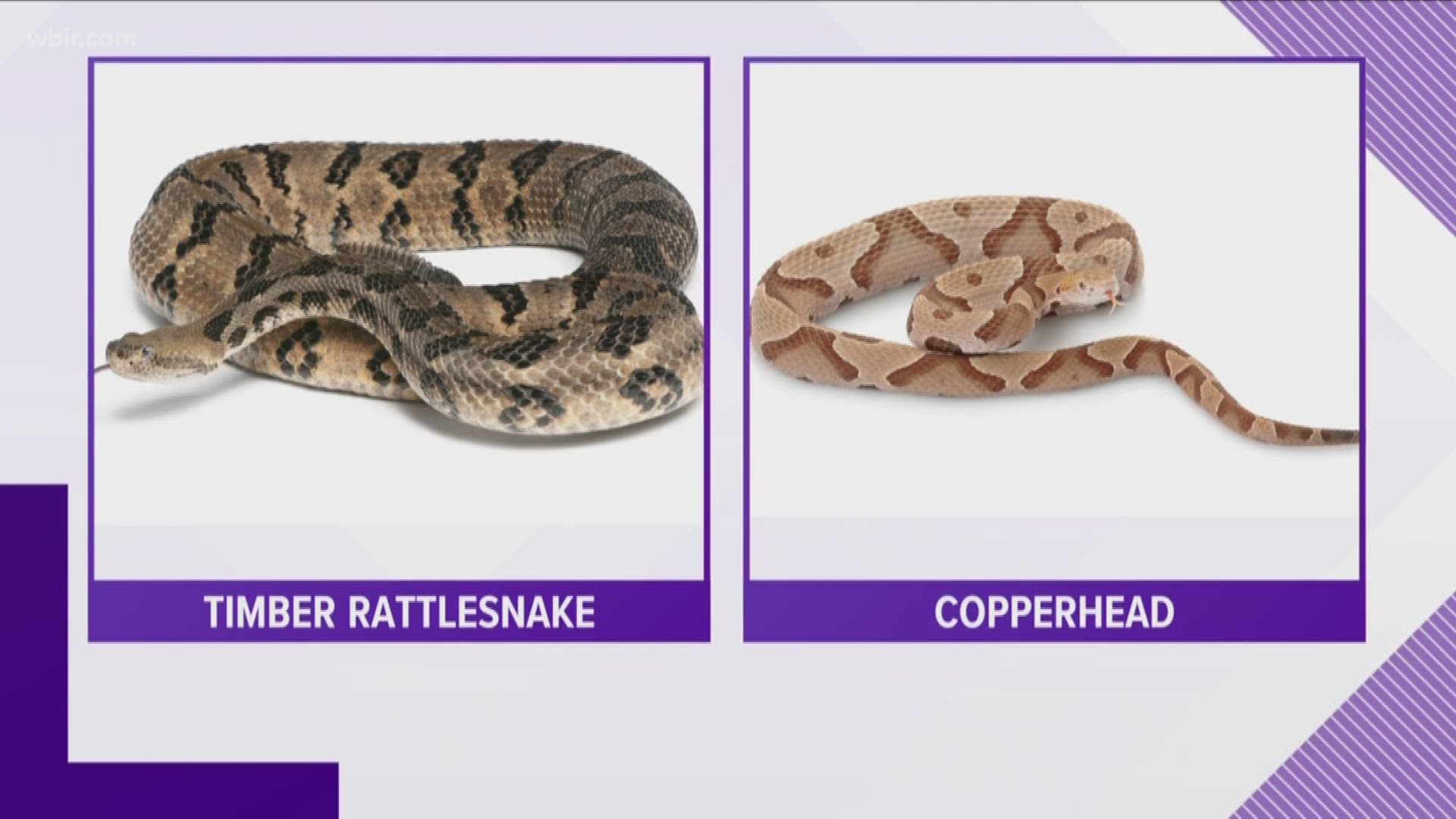 In the springtime, they slithered out from a long winter's nap to soak up the sun, and now those venomous snakes are reproducing.

Yes, Copperheads are having babies.

Seeing these serpentine neighbors in your yard or on a hike is nothing new, but how can you tell if a snake venomous or not?

Can identify a venomous snake? Test your knowledge with our quiz.

There are four species of venomous snakes in Tennessee, but only two of them are found in East Tennessee: the timber rattlesnake and the copperhead.

"The timber rattlesnake is easy, it has a rattle, pretty simple one,"  explained Zoo Knoxville's Director of Animal Care Phil Colclough said of identification.

"Copperheads are a little more difficult, a copperhead pattern looks like Hershey kisses on its back, narrow at midline, fat on the sides; a series of Hershey kiss, big, broad coppery head, the youngsters have a bright yellow tail," Colclough explained.

Copperheads often are confused for corn snakes who have a similar look.

RELATED: Hiss! Here are the four venomous snakes of Tennessee

1 / 4
ThinkStock
Timber Rattlesnakes are relatively shy snakes found statewide in forests and shaded areas where they can feed on rodents.

The Tennessee Wildlife Resources Agency said people in East Tennessee often believe they have found cottonmouth snakes (also known as water moccasins) in the area, but it is a case of mistaken identity. They are actually non-venomous northern watersnakes.

"People will argue till they are blue in the face about water moccasins being here, but none of those are around here, what they are seeing is northern water snakes, common but harmless," Colclough said.

Another common case of mistaken identity comes from telling the difference between a venomous coral snake and a non-venomous scarlet kingsnake.

TWRA said only the scarlet kingsnake can be found in East Tennessee, so we should be safe.

Credit: Getty Images/iStockphoto
A close up of a Scarlet Kingsnake in Florida.

What do I do if I find a snake?

"Most venomous snake bites happen with people who are trying to interfere with the snake, people trying to pick it up, kill it with a shovel," Colclough said.

Don't kill it. That is illegal.

Instead, find an animal organization to help relocate it. Remember, these creatures play an important role in the environment.

"They do a whole lot of good, they keep rats and mice away, appreciate them, some have really beautiful patterns," Colclough said.