'The sooner, the better' | Construction projects continue across Greensboro as drivers look forward to completion dates

The intersection of Battleground Avenue and Westridge Road is just one place home to construction cones for the last several months as crews work on improvements. 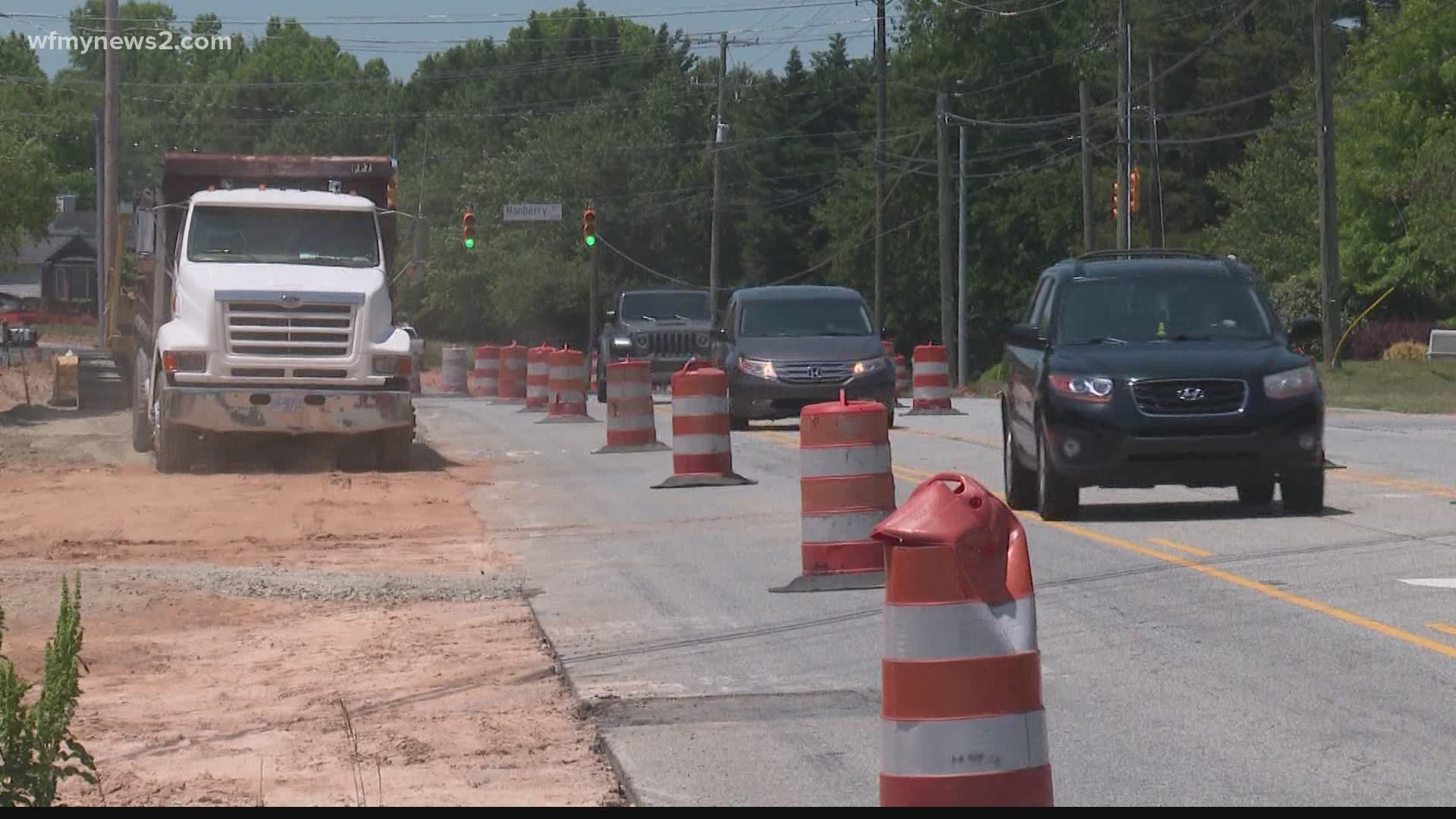 GREENSBORO, N.C. — Some sites across the city of Greensboro have been or are about to become home to construction barrels and heavy equipment as crews work to make improvements for drivers and pedestrians.

One of the city's busier intersections at Battleground Avenue and Westridge Road is one spot where construction has been ongoing for the last year and a half.

Crews started working on the area in the late summer, early fall of 2019. The work, worth about $7.6 million, was initially set to wrap up on May 27 of this year but is now pushed back to the fall of 2021.

The project creates new turn lanes, concrete islands, sidewalks, and grassed and landscaped medians, according to the city.

"I wasn't worried about it I was glad because battleground is always so congested in this area," she said.

Hager said she also lives nearby so drives through the intersection often.

"Congested, backup, you would have to wait through the light two, three times. Having only two lanes in this part of town it was just congested all the time," she said.

But the process of working through the construction hasn't necessarily been a breeze, according to Hager.

"A lot of dust, a lot of noise, a lot of construction. We hear it constantly whether it's the concrete crews, there's just people here all the time," she said.

Hager said the crews have done a great job on the work and cleaning up every day and she's looking forward to the project being done.

"I'm ready to stop having to wash my car every day from all the dirt and the grime, so the sooner the better for us for sure," she said.

Mona Teague said she avoids the area as much as she can, and will probably continue to do so when construction is complete.

"With the growth in Greensboro a lot of these different intersections are starting to be the same thing and for a safety issue and driving it's scary," Teague said.

Construction also continues over at Horse Pen Creek Road, where crews are working to widen the roadway.

New lanes, a wide median, bike lanes, and sidewalks will be added to the road, according to the city.

The city said crews will also install a new bridge over Horse Pen Creek to allow for pedestrian and bicycle traffic along the creek.

"With the new roadway, new curb and gutter will support an enhanced stormwater collection system along the road," a construction plan from the city said, "This roadway project, the largest city roadway project in many years, will also incorporate aesthetic treatments in a parkway."

Construction started in the Spring of 2018 and has an anticipated completion date of Summer 2021.

Construction cones have taken up the intersection of West Market Street and Guilford College Road for a few years now, but city leaders said construction should wrap up by the end of this summer.

According to city leaders, the project includes traffic operational improvements and adds turn lanes including double left-turn lanes on all approaches. The project also provides sidewalks through the intersection and extends them along each approaching street.

"The need for improvements in this location were first identified in the late 1990s," according to a statement from Hanna Cockburn, director of Transportation for the City of Greensboro.

RELATED: An end in sight for a delayed Greensboro road construction project

Orange barrels have recently started taking up some lane space on Summit Avenue right before you get into downtown Greensboro.

Crews are working to add enhancements to the streetscape by improving storm drainage, landscaped medians, bike lanes, decorative street lighting, and upgraded water lines, all while maintaining the historical integrity of the area.

The project will also repave the road between Lindsay Street and East Bessemer Avenue.

The city said the project was identified for funding as part of the voter-approved November 2008 bond referendum. Streets impacted in the area are Summit Avenue from Brenner Place to Sullivan Street, and along Yanceyville Street from Summit Avenue to East Lindsay Street.