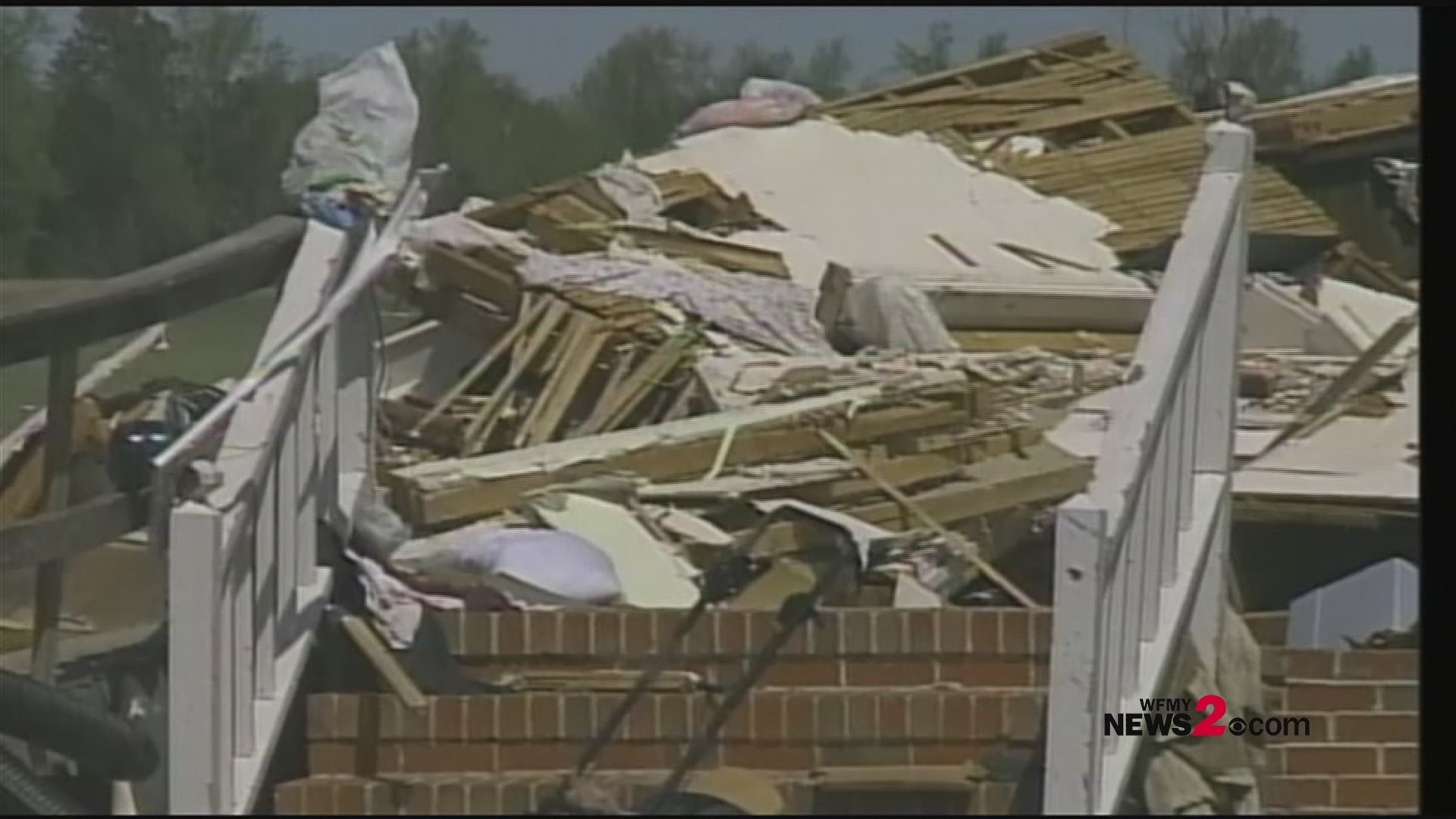 Friday marks 10 years since 30 tornadoes touched down on a single Saturday afternoon in North Carolina. The storms killed two dozen people as they swept across the state.

If you lived here at the time, it's a day you won't soon forget.

The setup for severe weather was remarkable. A strong cold front was on the way to North Carolina from the west. Warm, humid air was already in place over NC and continued to stream in from the south.

"This was a textbook setup in every way for tornadoes," says WFMY Chief Meteorologist Tim Buckley, who worked in Wilmington, NC at the time. "It was well known that this was going to be a bad severe weather day." And it was.

The winds in the atmosphere was positioned just right so that any thunderstorm that formed was able to easily spin. The National Weather Service had issued a rare "high risk" outlook for severe weather, including tornadoes.

Storms started to fire in the western Piedmont around 1pm. The first tornadoes of the day struck in Rowan and Davie county. Much of the Triad was spared, but another tornado formed in Northern Alamance county causing damage.

By 4pm, the line of storms moved into Central North Carolina and hit warmer air and just exploded. "Supercells" produced long-lived tornadoes that stayed on the ground a long time, producing incredible damage.

From there, one tornado after another continued to hit eventually dotting most counties in the Sandhills and Eastern North Carolina. The severe weather didn't come to an end until after sunset. 24 people were killed.

One of the most powerful storms of the day was also on the ground the longest. What's known as the Sanford-Raleigh tornado was on the ground for more than 68 miles, and left a path of absolute destruction.

This was an EF-3 tornado with winds up to 160 mph. 6 people were killed, and more than 100 people were injured.

It started in Moore County, then rolled right through Sanford in Lee County. It destroyed a Lowe's Home Improvement store. It then rolled into Wake County heading right for Raleigh.

Significant damage was seen in the downtown Raleigh area and along the more than 60 mile path of this deadly storm.

WFMY Meteorologist Ed Matthew's family was right in the path of the storm. You can hear their story here: Family remembers the Sanford tornado

In the end, 24 people lost their lives to tornadoes on that day in North Carolina. It's a tragically high number that could have been even higher if not for the advance warnings put out in the days ahead and on the day itself.

The deadliest tornado was in Bertie County, NC where 12 people were killed in a single storm.

While April 16, 2011 holds the record for most tornadoes on a single day, it is not the deadliest outbreak NC has seen. More than 40 people died in the March 28, 1984 tornado outbreak.