A hiker captured a unique photo that was thanks to a weather phenomenon known as a Brocken Spectre. 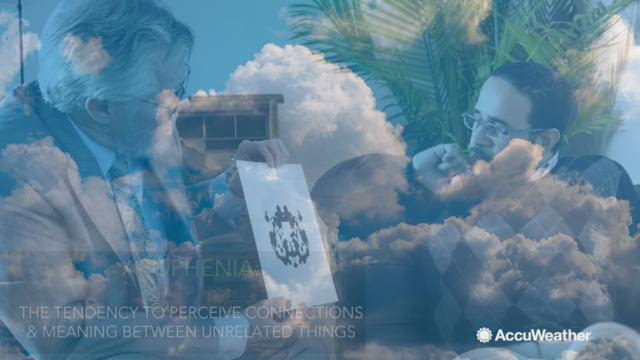 Lee Howdle was out enjoying a hike in the English countryside on Friday, Feb. 7, when he looked to the sky and saw an otherwordly sight.

As he trekked up Mam Tor, a 1,696-foot-high hill in the county of Derbyshire, located in the English Midlands, he saw what appeared to be an angellike image shrouded in mist and surrounded by a colorful halo, staring back at him.

As it turns out, it wasn't a divine presence appearing in Howdle's path, but rather his own shadow reflected back into the sky, thanks to a weather phenomenon known as a Brocken Spectre.

"Sometimes I think I am lucky," Howdle wrote on Facebook. "Today I saw this rare weather phenomenon called 'Broken Spectre.' My shadow and a circular rainbow projected onto a low cloud."

According to Les Cowley, who operates the website Atmospheric Optics, "The 'spectre' is the shadowy figure -- the glow and rings are of course a glory centered directly opposite the sun at the antisolar point."

The remarkable display is most commonly produced at higher elevations "when a low sun is behind a climber who is looking downwards into mist from a ridge or peak," according to Cowley, a longtime expert on such phenomena.

The National Weather Service defines a glory as "an optical effect characterized by concentric rings of color (red outermost and violet innermost) surrounding the shadow of an observer's head when the shadow is cast onto a cloud deck below the observer's elevation."

The term Brocken Spectre is attributed to many similar such sightings on the Brocken, the highest peak in the Harz Mountains of northern Germany.

According to The Derbyshire Telegraph, Howdle, 33, described an arduous trip up the hillside.

"The trip up was quite difficult, as it was very icy and frosty," he said, according to the news outlet.

"However when I reached the peak and started making my way to ‘the gate' on the ridge, that's when I looked to the side of me and my shadow was huge within the circular rainbow.