A Winter Storm Warning is in effect through 6 p.m. Monday for much of Northern California. Heavy bands of rain will move through the region from over the weekend. 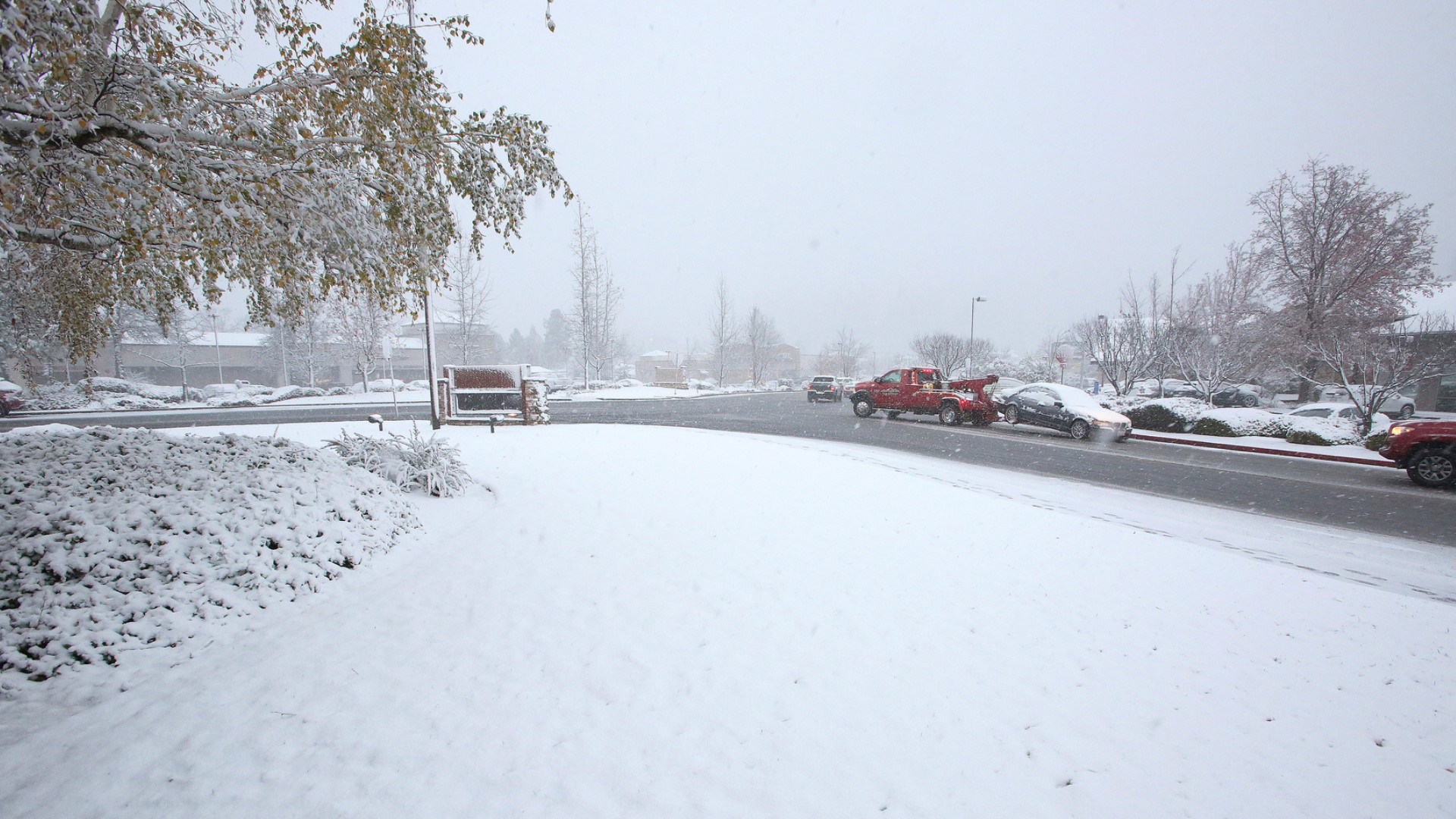 Thousands of residents have been affected by power outages in the mountains outside Los Angeles and in Northern California after rain and snowstorms walloped the state.

Power might not be restored before Monday because of area road closures, crews said. Officials were providing firewood to residents to help them keep warm after the communities were hit by a powerful snowstorm last week.

Chain controls in the Sierra have been put in place on several roads. According to the California Highway Patrol’s Truckee division, chain controls at various levels of restriction are in place at the following locations:

Outages also affected thousands of people across Northern California, many of them in Santa Clara, after a severe weekend rainstorm downed power lines.

The heaviest rain, however, fell on the Santa Cruz Mountains and Big Sur coast. The National Weather Service in Monterey said rainfall totals there surpassed seven inches in 24 hours, the Mercury News reported.

Trucks on westbound Interstate 80 are being turned around at the California-Nevada state line due to traction problems, according to Caltrans District 3.

Trucks with chains were released on eastbound I-80 at Applegate.

Holiday travelers will once again hit the road and head home as the Thanksgiving holiday weekend comes to an end.

"Expect intermittent periods of rain over the Valley with moderate/heavy snow across the Sierra," the National Weather Service (NWS) in Sacramento said in a tweet.

They're also warning those traveling on Interstate 80 into the Sierra of a heavy band of snow that's starting to cover roads.

"Additional moderate/heavy snow is currently moving toward the northeast, which could further impact mountain travel," the NWS said.

The second storm of the Thanksgiving holiday weekend will impact drivers headed home from grandma's house through the Sierra, Foothills, and Valley.

The Winter Weather Advisory has ended, but a Winter Storm Warning is still in effect through 6 p.m. Monday for much of Northern California. This system will be pulling in moisture from the South Pacific, causing temperatures to be warmer, even if you don't feel it. The cold blast of arctic air that moved in the Tuesday before Thanksgiving is still causing temperatures to remain low, as of Saturday morning.

Snow levels will continue rising from 3,000 feet to 7,000 feet in a matter of 24 hours with chain controls modified based on these levels. Interstate-5 north will still see snow chances north of Redding through Saturday night, but things should calm down by Sunday.

Strong winds are expected to accompany this stormy weather. A Wind Advisory is in place until 3 a.m. Monday. Winds gusts could reach as high as 60 - 70 mph. 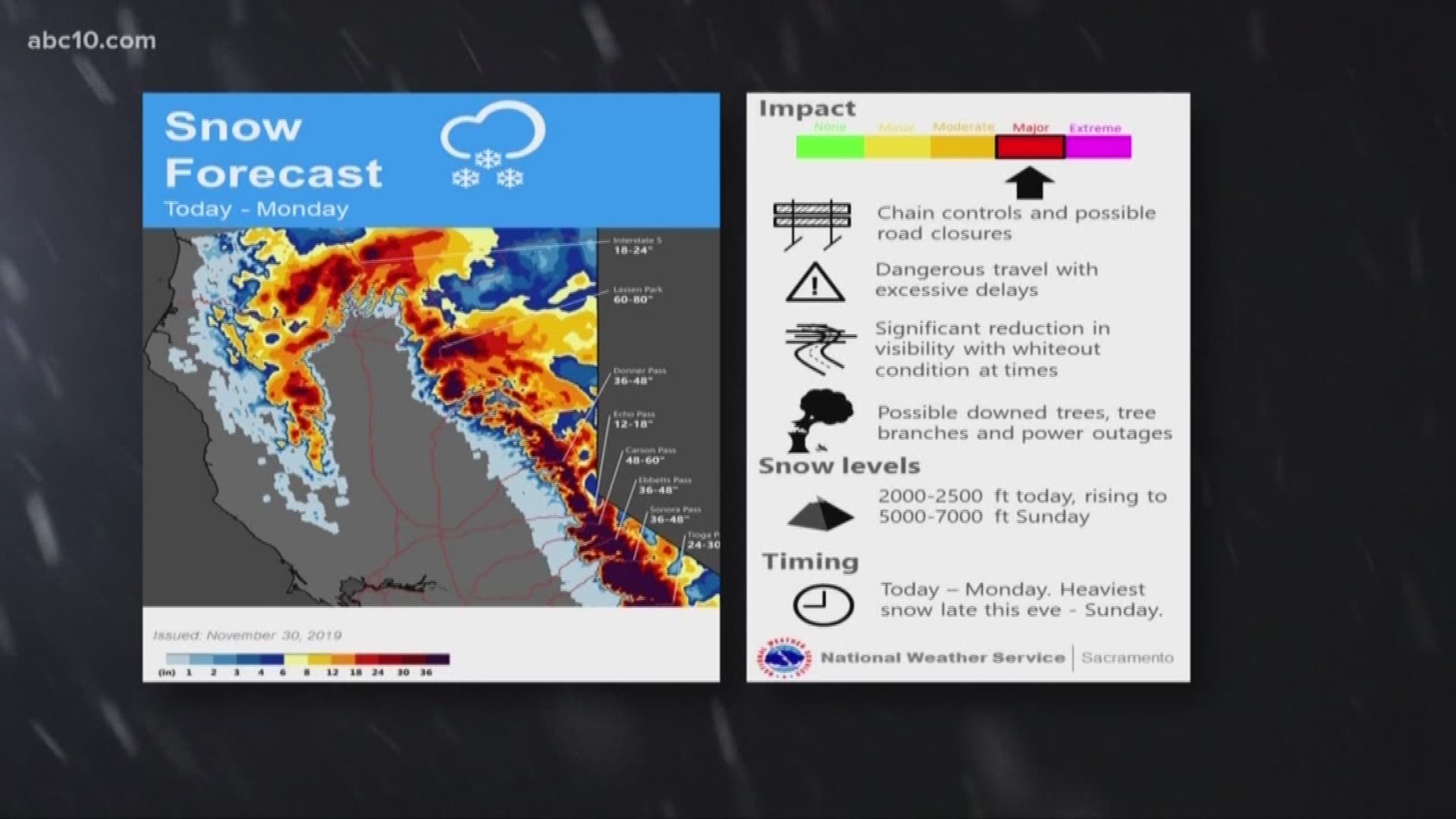 Chain controls are in effect for much of Interstate 80. Follow Caltrans District 3 and CHP - Truckee, and on Twitter for the latest driving and road conditions.

FOR THE LATEST WEATHER NEWS, DOWNLOAD THE ABC10 APP:

Caltrans explains what went wrong at the start of weekend travel