A mother and daughter were killed by a fallen tree in Wilmington and a woman died of a medical emergency in Hampstead on Friday, local agencies confirmed to WFMY. 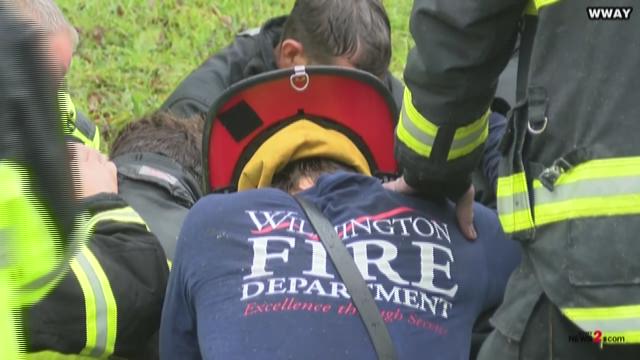 GREENSBORO (WFMY) -- More than ten people have been killed by Florence and her impact as the remnants of the storm moved through the area Saturday.

State and local officials have been warning residents the danger has not subsided as the Carolinas face what is expected to be historic flooding across the region.

Mother and baby killed by fallen tree in Wilmington

A mother and infant were killed in Wilmington, N.C. after a tree fell on a house there while the Category 1 hurricane throttled the eastern North Carolina coastline Friday morning. They were the first confirmed fatalities related to the storm, according to the Wilmington Police Department.

The father was also in the house and had to be taken to a local hospital for treatment after the incident.

Firefighters in Wilmington gathered outside the house to pray for the family.

Woman dies after EMS couldn't get to her

In Pender County, a woman had a medical emergency in Hampstead and passed away early Friday morning, according to the county's Emergency Management. EMS services could not get to the woman due to the storm, marking the third Florence-related death since the storm began hitting the North Carolina coastline.

Two people were killed in Lenoir County, according to Emergency Services Director Roger Dail during the storm. Two septuagenarians died in Kinston in separate incidents, according to authorities.

A 78-year-old man was electrocuted at a home on Silver Smith Circle in Kinston early Friday morning while trying to connect two extension cords outside in the rain. Family members found the man's body, according to Lenoir County Emergency Services.

Also in Kinston, a 77-year-old man died while checking on his hunting dogs outside in the storm. He was blown down at 8 a.m. at his home on Middle Street. His body was also found by family.

Woman dies after crashing into fallen tree in S.C.

The sixth Florence related death is also the first reported in South Carolina, according to both the South Carolina Highway Patrol and the Union County Coroner's Office. A woman was driving along State Highway 18 in Union County and crashed into a tree that had been knocked down by the storm's winds.

Amber Dawn Lee, 61, of the town of Union, died at the scene, according to Union County Coroner William Holcombe. The crash happened just after 9:30 p.m. and Lee was reportedly wearing a seatbelt and the only one in the vehicle, according to Capt. Kelley Hughes with South Carolina Highway Patrol.

Five deaths have been recorded thus far with regard to hurricane Florence! Deepest sympathies and warmth go out to the families and friends of the victims. May God be with them!

"Please, everybody stay home," Blake Wallace, the county sheriff said on the phone. "We have a curfew in effect from 7 p.m. to 7 a.m. and if you do not have to get out…stay at home or evacuate to higher ground if you’re in a flood prone area.”

The North Carolina State Emergency Response Team released a statement Saturday night indicating a, 81-year-old man died in Wayne County after falling and hitting his head as he packed to evacuate on Friday.

The North Carolina State Emergency Response Team also attributed a husband and wife's deaths to the storm. The couple died in a house fire in Cumberland County, N.C. on Friday. Investigators said the fire started as a result by a candle that was being used during a power outage.

Deaths not related to Florence in Carteret County

North Carolina Army National Guard soldiers were sent to a home along the 100 block of El Nora Lane in Otway, North Carolina, on Friday in reference to two deaths there. A preliminary investigation has shown that the deaths of Pauly Lewis and his wife Alicia Lewis are the result of a murder/suicide. No other information is available.

Amanda Tesch, a spokesperson for the Carteret County Emergency Services, said that earlier reports from her office that the death toll has been raised were never correct.

“Our hearts go out to the families of those who died in this storm,” Gov. Roy Cooper said in a press release. “Hurricane Florence is going to continue its violent grind across our state for days. Be extremely careful and stay alert.”

WPD can confirm the first two fatalities of Hurricane #Florence in Wilmington. A mother and infant were killed when a tree fell on their house. The father was transported to NHRMC with injuries. https://t.co/FC5PAhuxig

Another person died in a shelter at West Brunswick High School Thursday morning, however, their death was not related to the hurricane.

"We are saddened by the sudden passing of one of our community, and our hearts go out to the family and friends who are now grieving during such an already stressful period," Amanda Hutcheson, the Brunswick County Government public information officer wrote in an email. "An investigation into the death is underway, but it appears there is no reason for others at the shelter to worry."

Florence made landfall at 7:15 a.m. on Friday as a hurricane with sustained winds of 90 mph - making it a Category 1 storm. While it had weakened significantly since peaking as a Category 5 storm in the Atlantic, the heavy rain bands and slow movement have caused catastrophic flooding and storm surge along the coast.

The storm was downgraded from a Category 1 hurricane to a tropical storm late Friday. It's since slowed down even more than it had been - moving west at just 2 mph. As of 8 a.m. on Saturday the system was located about 35 miles west of Myrtle Beach, S.C. and was about 45 miles south-southeast of Florence, S.C. (no relation).

Sustained wind speeds were clocked at 50 mph with higher gusts. As the system continues its way through our neighbor to the south, its dropping inches of rain upon the Piedmont Triad. Flooding is expected throughout our area.

Editor's Note: A previous version of this article reported seven deaths due to Florence. The Carteret Country Sheriff's Office confirmed that two deaths initially reported as a result of Florence in North Carolina were a result of an apparent murder-suicide.