This weekend, several people contacted Greensboro Police about a post on Instagram possibly related to Tyarra Williams. The 19-year-old was last seen on January 7th near her apartment complex in Greensboro. 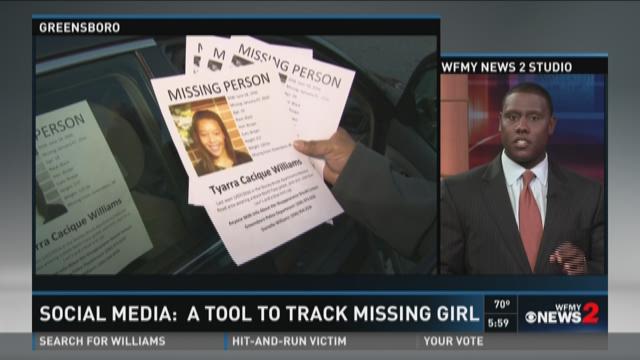 GREENSBORO, N.C. -- All police need is one tip to crack a case.

This weekend, several people contacted Greensboro Police about a post on Instagram possibly related to Tyarra Williams. The 19-year-old was last seen on January 7th near her apartment complex in Greensboro.

A user on Instagram claimed he overheard two people talking about Williams and thought one of them knew where she might be. Greensboro Police interviewed the man and quickly ruled out his story.

"The information came to us and within probably about 15 minutes of receiving the first call, we had detectives who were on the information to see was it accurate, was it something that we could go on, was it a new lead for Tyarra Williams," said Captain Mike Richey.

WFMY News 2 is not sharing the entire post because of the language in it. The post mentioned a possible location for the missing girl. After an immediate investigation, the tip was ruled out.

"We did track down the person who posted it, it was not a hoax or anything along those lines, it's just that he heard some unrelated conversations that we were able to figure out had nothing to do with the Tyarra Williams case," explained Captain Richey.

He added, "Tyarra Williams is a case that really has the community concerned and has a number of our resources. We want to find this young woman and we hope that we find her in good shape and unfortunately, we don't currently have any active leads we're pursing because at this point, those leads have been exhausted."

Captain Richey says they view tips on social media like 911 calls. The tips are investigated fully and police try to help however they can.

"As long as there is some criminal predicate behind what is being sent, or it's information on an active case, of course, we follow that up."

Williams was last seen 7 weeks ago at the Stoneybrook Apartment Complex off Randleman Road. She told her brother and boyfriend she was going to meet a friend and she'd be back in an hour, but she never returned.

Family and friends have gone out searching and passing out flyers. Police believe she could be in danger.
If you know anything, please call Crime Stoppers at 373-1000.