The foothills got bursts of big snowflakes Friday morning and afternoon, but the chances for sticking snow is going down for the Greensboro area. 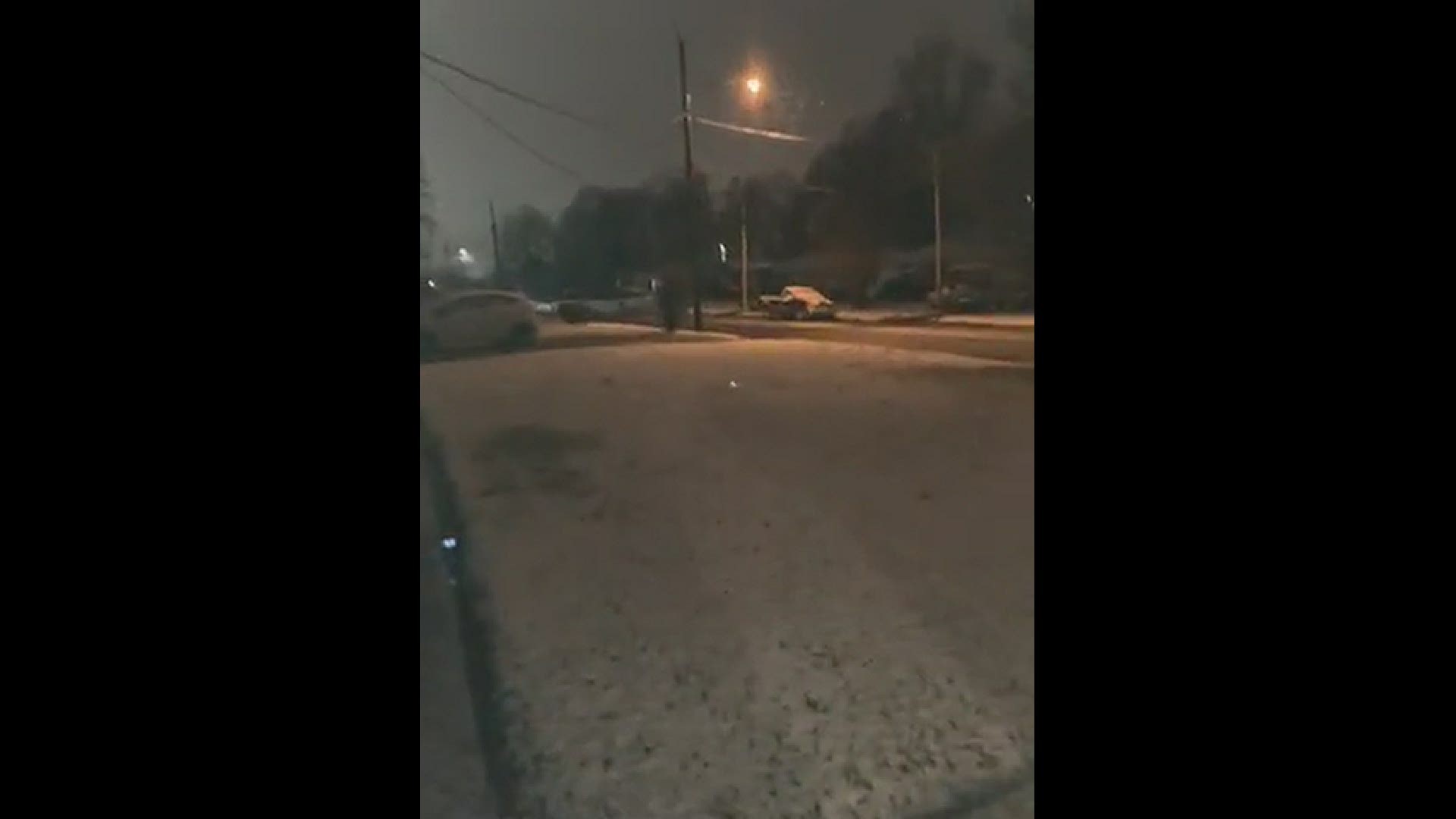 GREENSBORO, N.C. — The Triad is getting a mix of rain and snow, on and off, early Friday afternoon. The best chance for accumulation appears to be later this afternoon for the Greensboro area. Follow this blog for live updates on weather conditions, roads, schools, and your snow photos and videos. You can text photos to us at 336-379-5775.

Check out the latest timeline and snow total predictions by the WFMY News 2 Weather Team.

8 p.m. Duke Energy reports 1,841 NC customers are without power as of 7 p.m. Friday with 446 people in Forsyth County without power. No other utility service companies in Triad are reporting outages.

5:29 p.m. WFMY's Christian Morgan is on Facebook Live reporting the latest on snowfall in the Triad! Slick roads are possible as it gets dark Friday night.

You can find the live stream on WFMY's Facebook page.

5:28 p.m. According to Duke Energy as of 5 p.m. Friday, 230 NC customers are without power. No outages have been reported in the Triad except in Wilkes County.

4:30 p.m. More snow is starting to fall in parts of the Triad and starting to accumulate in some spots.

4:30 PM-
The changeover to snow is happening in parts of the Triad now, west of the white line. Even starting to accumulate in spots. To the east it's still rain and some sleet.

Through about 9 PM we'll still have the possibility of seeing some accumulating snow across the area. pic.twitter.com/qe5ZjmBTd1

4:15 p.m. - Snow sticking in Rockingham County. Check out the roads. Thanks to Chris Burleson for sharing this video.

We've got a snow event in Rockingham County.

One person has died as a winter storm brings snow to the Carolinas Friday.

A winter storm has already brought heavy snow to the mountains, where snow totals have surpassed 6 inches and counting in some places already by Friday afternoon.

11:44 a.m. -- Where's the snow? The chance of seeing accumulating snow across the Triad is decreasing, but 1-2 inches of snow is still possible later Friday. How did the forecast change? Two big things: More dry air moved in and there was more sleet than expected, according to our weather team.

The chance of seeing accumulating snow across the Triad is decreasing, BUT there's still hope for a little later today. 1-2" of snow is still possible. So what happened? Two big issues: more dry air and more sleet than expected. Those are HUGE limiting factors. #StormTrack2 pic.twitter.com/Ft3s9YSQa2

9:17 a.m. -- Snow is falling in Greensboro. Our chief meteorologist Tim Buckley is getting a snow/sleet mixture at his home.

I’ve got a snow / sleet mixture in Greensboro with a little slushy accumulation on elevated surfaces at the moment. @wfmy #SnowOn2 pic.twitter.com/dnwyB7ngdL

8:10 a.m. -- We found snow in Greensboro! Just a few flakes reported by our photojournalist Ryan Gavette. It's not sticking at this time.

Snow is starting to fall in Greensboro right now but not sticking to the ground at this time. @WFMY @wfmyweather pic.twitter.com/xh85Nwy0Qe

7:29 a.m. -- A viewer shares a report of sleet near the Climax/Pleasant Garden area.

7:29am - Another rain/snow/sleet shower moving into the Triad. @WFMY https://t.co/CdaF2IapsT

7:22 a.m. -- Wondering where the snow is? Terran Kirksey says the best chance for accumulating snow in the Triad will be this afternoon.

The best chance for accumulating snow across the Triad will arrive this afternoon.

We’re expecting a switchover from a wintry mix to a brief timeframe of all snow later this afternoon into the evening.

6:20 a.m. -- Our Itinease McMiller is in Greensboro keeping an eye on road conditions. Several trucks have passed through the city, salting roads in preparation for snow accumulation.

This morning, I’m keeping an eye on business 85 in Greensboro as a taste of winter weather makes its way to our area.

All is quiet in Downtown WS, nothing to report when it comes to snowfall! The little drizzle we had has subsided but things could change any second from what @tkweather says! Here’s hoping for snow 🤞 @WFMY @wfmyweather @_amandaferguson pic.twitter.com/2yGA2VJctq

6:00 a.m. -- Meteorologist Terran Kirksey shares an update on snow totals and expected conditions. Snow reached the North Carolina mountains overnight and is heading for the Triad.

SNOW FORECAST: The best chance for significant snow totals will remain in the foothills & mountains, but a few inches will be possible in the Triad. We’re forecasting 2-4” *in general*.

Precipitation NEVER falls evenly, so there will be some spots that see more & some less. pic.twitter.com/jQGq2xsoa9

MORE FROM OUR METEOROLOGISTS:

It's been a long time since we've had a decent amount of snow in our area. pic.twitter.com/Vo6YzsLnrM

According to our meteorologist, we are expecting 2-4" in Triad areas. As far as travel is concerned, it will likely be rough through Saturday morning, and trees and power lines could get weighed down.

-Wet snow begins very early Friday AM, lasting the day on/off.
-2-4" likely in the Triad areas, more in heavy bursts of snow
-Travel will likely be rough through Sat AM
-Trees/Power lines may get weighted down pic.twitter.com/x31gCSVFxJ

If you would like to submit photos of snow in your area, you can text them to us at (336) 379- 5775! Make sure to include your name and location and you just may see your picture or video on the TV screen.

HOW TO GET A SNOW CODE:

In the event of inclement weather you’ll want to make sure your school district, business, church, or organization has a snow closing code.

You must have a snow closing account before a snow event in order to list a closing. You can learn more about the snow code by clicking here.