Are we going to get some snow this winter? Here's the WFMY News 2 Weather Team's winter forecast

Expect fewer chances for snow than normal, but that doesn't mean we can't get a storm. 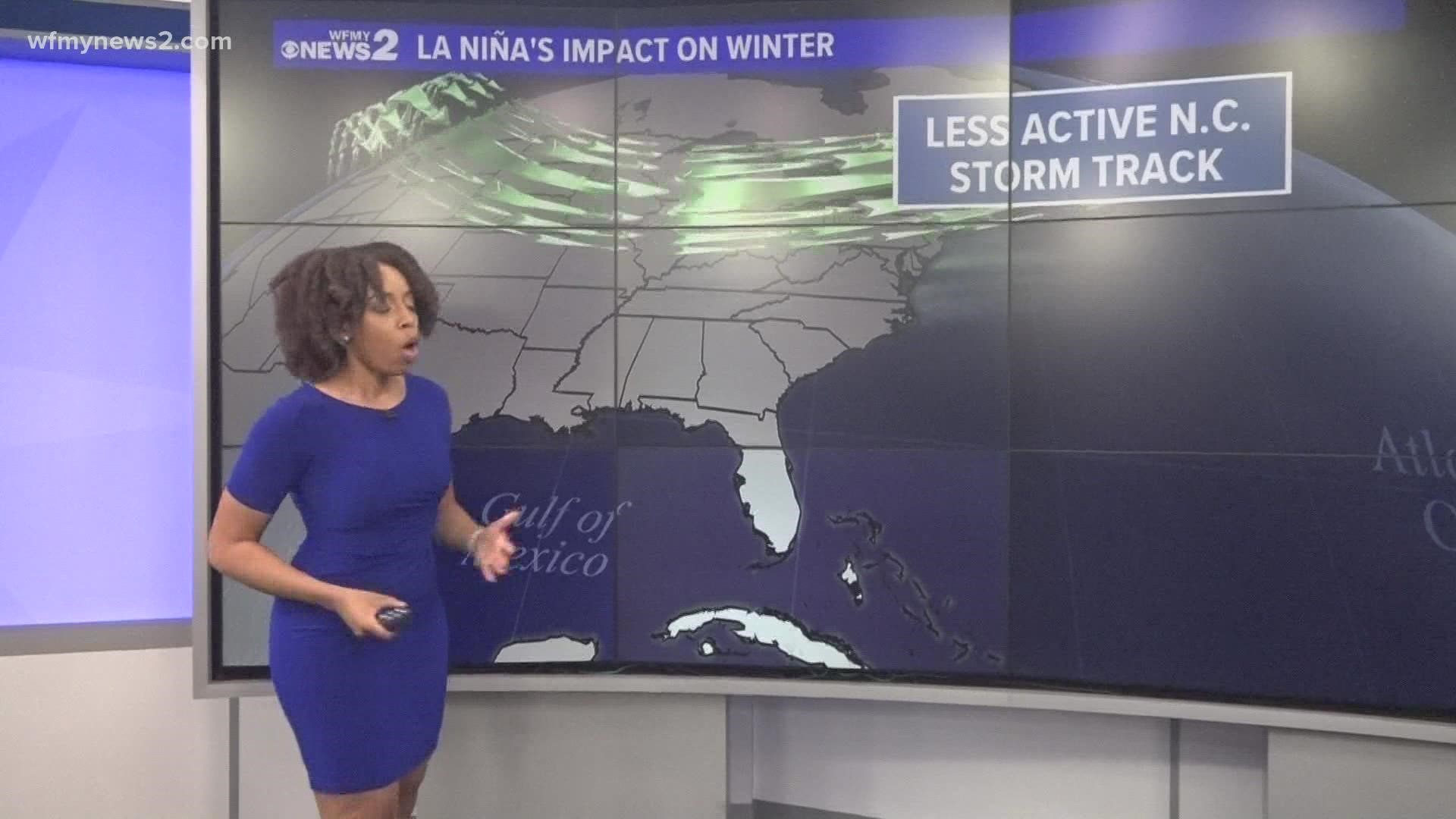 GREENSBORO, N.C. — It's that time of year when everybody starts asking, "When's it going to snow?"

Well, it's getting cold, and it's time to take a look at what the 2021-2022 winter may bring for the Piedmont-Triad. The WFMY News 2 Weather Team has been studying the weather patterns most likely to unfold over the next few months. Here's what they found after doing their research and applying their forecasting experience for our area.

It always starts by looking at global patterns, and this year we're seeing something similar to last year.

A lot of times during winter we talk about an El Niño weather pattern, but this year we're talking about the complete opposite, a La Niña pattern. What is it, and why do we care?

During a La Niña weather pattern, the water near the equator in the Pacific Ocean is much colder than normal which can have impacts on our weather all the way on the east coast of the U.S. This is the same pattern we were in last year, making this a "double-dip" La Nina year.

Credit: WFMY News 2
A La Niña weather pattern is when the eastern Pacific Ocean has cooler than average temperatures around the equator. This has far-reaching effects on the weather in the Western Hemisphere.

That colder water changes the intensity and location of the subtropical jet stream, which is our storm track that drives weather systems our way. During La Niña it lives farther to the north, meaning not as many storms track toward North Carolina. Simply put, we don't tend to get as many chances for rain and snow.

At the same time, the polar jet stream (which determines how far south Arctic air can roam) tends to be a bit farther to the north as well. This means we typically don't have as many outbreaks of bitterly cold air; although it can still happen on occasion.

Credit: WFMY News 2
The jet stream tends to be a bit farther north during a La Niña winter. That means fewer storms than average for the Carolinas.

Taking all this into account, in the Carolinas we tend to have drier than average weather during a La Niña winter. Temperatures tend to be near average, but can often be a tad warmer.

Using a climate signal like La Niña is just one aspect of forecasting weather during the winter months. For example, last year's winter didn't behave exactly like a La Nina year, as it had more rainfall. Still, this can be a helpful guide.

WHAT ABOUT PAST LA NIÑA "DOUBLE-DIP" YEARS?

The past can be helpful in predicting the future. We narrowed down some other years with similar characteristics to this year. Specifically, we looked at other winters which were the second La Nina in a row. We'll call them "Double-Dip" years.

From that data, we can draw some conclusions on what the temperatures, precipitation, and snowfall were like. Let's start with precipitation.

Credit: WFMY News 2
Past winters with similar conditions tended to be a bit drier than average.

Precipitation during these similar winters tended to be lower than average. This was a fairly strong signal. This makes sense given the fact that the jet stream tends to be a bit farther north, causing storms to miss our area more often than hitting it. Based on this data, we can re-affirm the idea that a La Niña tends to be a drier one for North Carolina, including here in the Piedmont-Triad. Keep in mind, we're talking about overall precipitation here. This doesn't necessarily mean lower snowfall. More on that as we continue.

Credit: WFMY News 2
Past winters with similar conditions tended to have less cold air than usual and averaged out a bit above average.

Temperatures in these similar winters tended to a bit warmer than average, with fewer cold outbreaks. There was one notable exception; the winter of 1985 featured a sharp Arctic Outbreak that set the record for the coldest temp in Triad history. Still, the overall trend points to at or above-average temperatures this year. We must also consider that cold air outbreaks have been becoming less frequent in recent years in a warmer climate.

Snow is always the number 1 question when it comes to winter forecasting, but also the hardest to answer for our area. You see, we don't get snow all that often in our climate, so sometimes the snow total for a whole winter is only based on one or two storms. From a statistical standpoint, past data only offers us so many data points to analyze.

With all the caveats above, we of course looked at past data for snowfall given the weather pattern expected for our upcoming winter. Here's what we found.

Credit: WFMY News 2
Past winters with conditions similar to this year were less snowy than average, overall. There were a few exceptions that had good snow.

There was a signal for less snowy winters among these double-dip La Nina winters. There were a few years that bucked the trend with over 10" of snow, but that was the exception, not the rule.

Given all the signals, we will expect fewer opportunities for snow than average. But, almost every Triad winter on record has some snow! It's just a question of if we can sync up the cold air with moisture once or twice to get a "good one"

We talked about La Niña, and looked at past winters with a similar setup. We also looked at other factors, including climate change, which have a big impact on how our next few months will play out. Here's what we expect.

A LOOK AT HISTORY

Throughout the years, it's often been feast or famine when it comes to snowfall here in the Triad.

The graph below shows all winters going back to 1928. You'll see there's often a lot of "noise" bouncing up and down year to year.

The snowiest winters on record have been between 15 to 25 inches in our area. The least snowy often have only an inch or two -- like the last two years.

Credit: WFMY News 2
A list of Triad winters through the years show it's often feast or famine when it comes to snow. There is a rather slow decline over time, on average.

It's also interesting to look at when snow typically falls here in the Triad area. On average, January has been our snowiest month throughout the years. More than 1/3 of our snow has fallen during that month. February is next up, followed by March. Many are surprised to know that March has seen more all-time snowfall than December, even though it's a warmer month on average.

Credit: WFMY News 2
On average, January is the snowiest month in our area. Followed by February and March with December in 4th place. It's not common for April or November snow to happen.

Credit: WFMY
The last few years have been tough for snow lovers. Here in the Triad, it's been about 3 years since our last real snowstorm

THINGS TO KEEP IN MIND

It can get confusing when snow rumors start to fly in the south. We have some tips to keep your snow sanity and to make sure you're getting the best info and don't get fooled by the fake stuff.

Credit: WFMY News 2
Keep these timeframes in mind when it comes to winter weather threats in the south.

Winter weather forecasting in the south is a process. It's simply not possible to know if we're getting snow a week in advance. In fact, there are some rules of thumb to keep in mind.

Keeping these timelines in mind will help you know if what you're seeing on social media is true. Better yet, check our app, our Facebook pages, and our newscasts for our expert opinions on the storm potential.

Keep "Tim's Snow Rules for NC" in mind. A lot of things have to go right for it to snow big here in North Carolina. Each and every year nowadays we start to see viral posts on social media about a big storm on the way. Don't fall for the hype. If it looks or sounds too good to be true, it probably is. Take a deep breath, and check our forecast.

Finally, sometimes it's best to keep it simple. After we show you all the maps and break it down for you, we'll use our WFMY Snow Meter to give you an honest and simple idea of how likely a snow threat is. Whether it's not likely, possible, or likely can give you an idea of where our head is as we're forecasting the storms for you.

Credit: WFMY News 2
Sometimes it's best to just keep it simple. When we're looking at a winter storm threat, we'll use the snow meter to break it down. 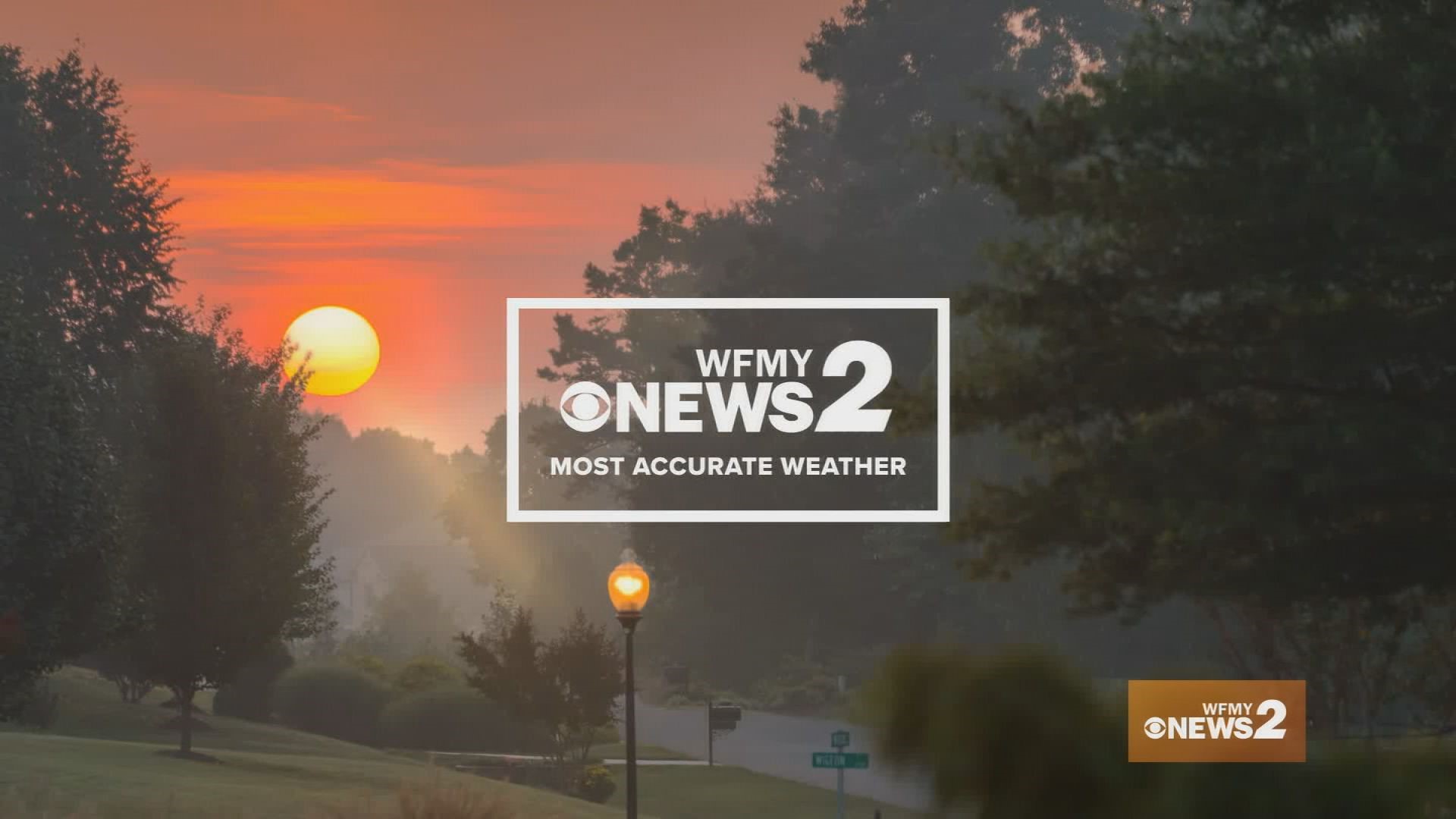