The City of Greensboro provided a list of offices, businesses and home locations that callers have complained about. The complaints include lack of mask-wearing. 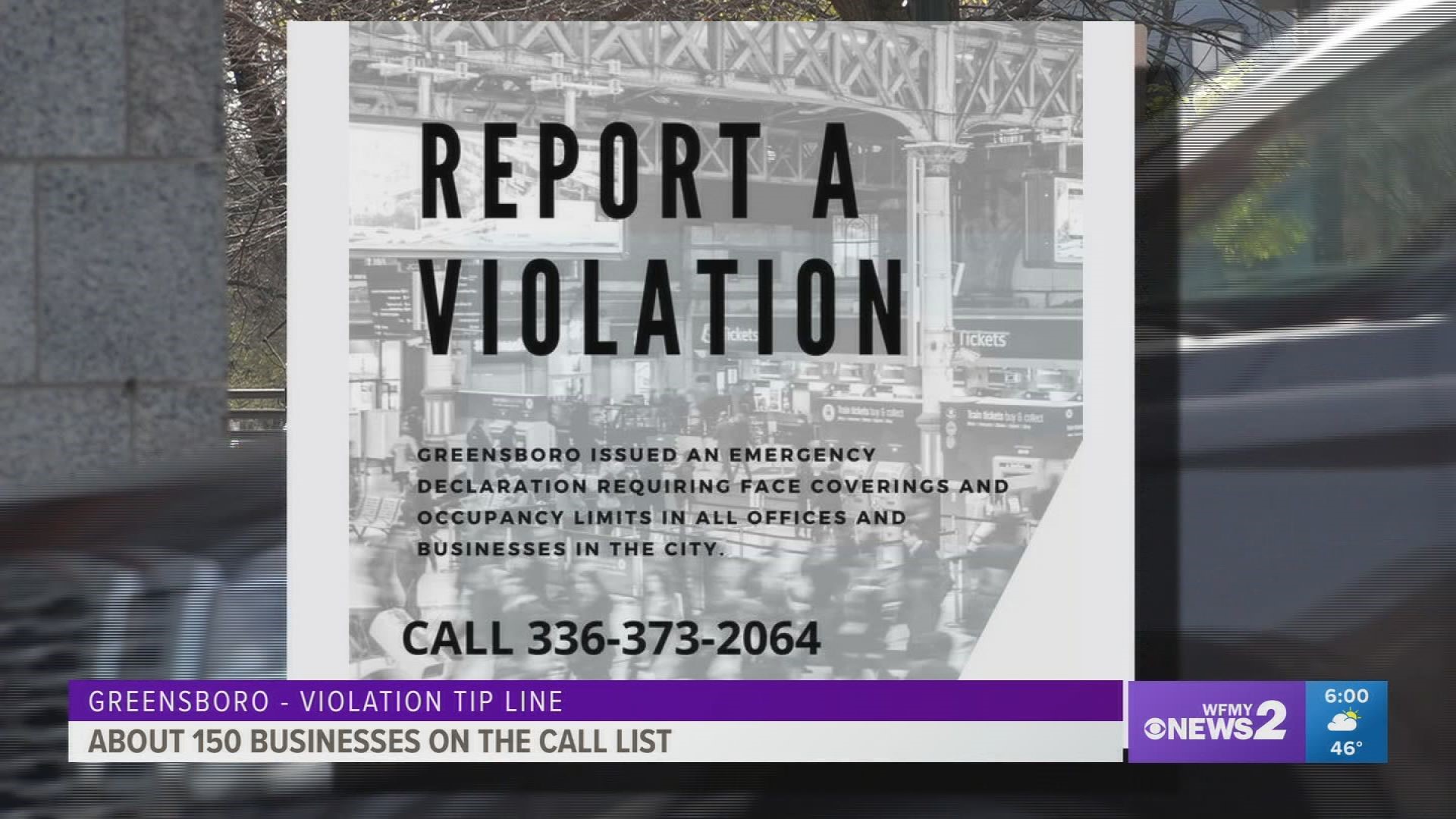 GREENSBORO, N.C. — The violation tip line is ringing in Greensboro.

City leaders said the tip line has received more than 150 calls from people reporting overcrowding or lack of masks.

There are some home addresses listed for throwing parties and businesses called out for not enforcing capacity limits.

But a city spokesperson said no one has been given a fine, and the goal is to keep it that way.

"We have received over 150 calls of concern," Greensboro Mayor Nancy Vaughan said at a City Council meeting Tuesday night.

158 calls to be exact, according to a list the city provided. The tip line launched on November 23, following the announcement of the enhanced State of Emergency on November 20.

RELATED: 'We have to get a hold of this' | Greensboro orders emergency declaration due to spike in COVID-19 cases, businesses in violation will be fined

"We are even getting calls from restaurant owners, bar owners, retail owners that are concerned about other bars, restaurants, or retail establishments who aren't following the governor's Executive Order," Mayor Vaughan stated.

On Nov 20, Greensboro Mayor @VaughanNancy issued an emergency declaration requiring the use of face coverings by persons in NC & reducing the occupancy limits of most indoor activities. To report a violation, call 336-373-2064. pic.twitter.com/1FRdKkO7hL

Callers are complaining about the same thing for the most part: employees not wearing a face covering, and minimal social distancing.

But there's one detailed call on the list that sticks out.

A caller alleged that the owner of Carolina Digital Phone, Nicky Smith, 'throws masks at people.'

"The complaint says 'employees are not wearing masks, owner Nicky Smith throws masks at people, and had a photo-shoot on 12/2 with 17 people in the hallway," Jess read aloud.

"Someone called and said that?" Smith replied. He completely denied that allegation.

"No, I have never thrown a mask at anybody."

But like so many others on the list, his business was paid a visit by a Greensboro Police officer to educate them about the emergency declaration.

"We were responsible in answering his questions and said 'yeah when we're in the elevators or areas where people are close in proximity we obviously wear a mask.'"

Again, no fines or even official warnings have been given out to places that allegedly aren't complying.

These have all been conversations and the city hopes to keep it that way. Mayor Vaughan reiterated the city is hoping for voluntary compliance. The goal is to avoid monetarily penalizing or closing a business.

City employees from various departments like code enforcement, special events, and parking enforcement will now be visiting businesses only on a complaint-driven basis, not police officers.