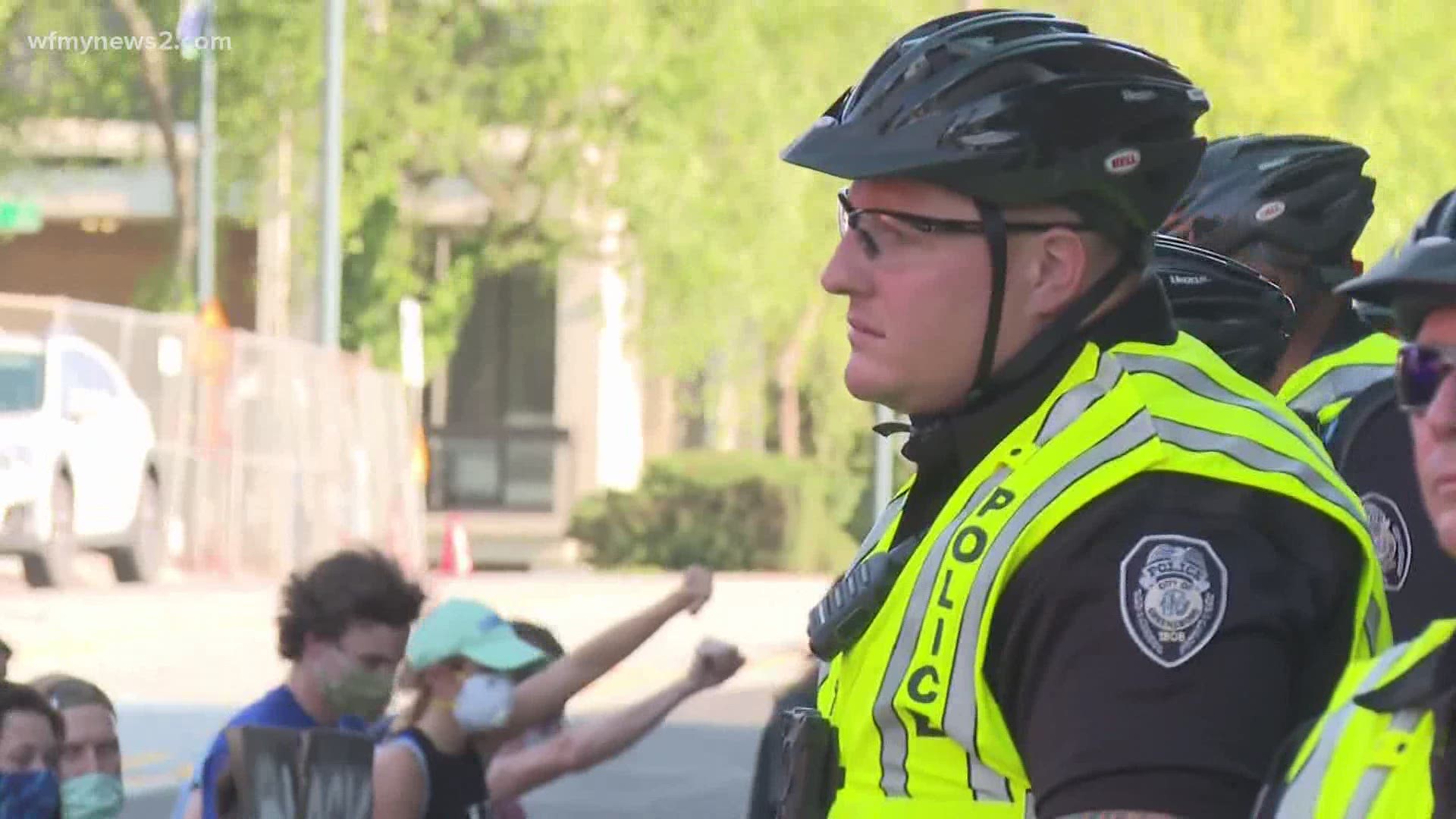 GREENSBORO, N.C. — Triad law enforcement agencies are making changes to their policies and have done so over the last year following the death of George Floyd.

Greensboro Police Department has already implemented a number of changes. They are also continuing to evaluate their policies and procedures to ensure they’re providing the best and most effective police services to the Greensboro community. They have updated their training and written policies for the department.

"We are happy that justice was served in this case and he is being held accountable. It hurt communities across America and it hurt law enforcement's ability to build relationships in the community and when you can't build relationships you are less safe," said Chief Brian James of the Greensboro Police Department.

One of the changes includes banning chokeholds absent the need to use deadly force. This was adopted on June 8, 2020.

Another policy change now requires officers to intervene, both verbally and physically, if they witness another officer using excessive force. The policy was adopted on June 8, 2020.

“At any time if an officer witnesses another officer use force in a manner which violates policy and training of the Department, the officer shall intervene both verbally and physically if necessary to stop the force. Supervisory notification shall then be made by the officer as soon as possible so that appropriate investigations can begin.”

Other changes include implementing a policy for officers to use the minimum amount of force necessary and was adopted on June 8, 2020.

“Officers will utilize the minimal amount of force necessary to overcome resistance and affect an arrest.”

Directive language stating officers will use no more force than reasonably necessary has been in Departmental policy since 1996.

De-escalation training is provided to every GPD officer. Through this training, officers are equipped with fundamental techniques to reduce the stress in a given situation and facilitate problem-solving.

“An officer must continually assess the totality of the circumstances and escalate, de-escalate, or completely cease any force utilized appropriately.”

Officers are also now required to verbally issue a warning, if possible, before the use of deadly force, including a Taser, pepper spray, or the release of a police dog. The policy was adopted on July 13, 2020.

DD 1.6.2
Where feasible, officers shall verbally warn a subject(s) before the use of deadly force, the use of a Conducted Electrical Weapon, the release of chemical munitions, or the release of a police canine.

Some of the changes include banning police officers from shooting at moving cars unless there’s no other way to stop a deadly threat. The change was adopted on February 10, 2020.

“Officers will not fire any weapon from or at a moving vehicle except to counter an imminent threat of death or serious physical injury to the officer or another person and no other means are reasonably available at that time to avoid or eliminate the danger. Officers will consider the following factors in determining whether shooting at a moving vehicle is justified:

Another policy, mandates officers must inform residents of their right to refuse a consensual search and they also have the right to withdraw consent at any time during a consent search. This policy change was mandated on September 18, 2020.

DD 12.5.1
Consent Searches will be conducted pursuant to the following Informed Documented

Consent procedures:
In all instances, officers shall inform the person from whom consent is sought the following:

· that the consent to search is voluntary,

· that they have the right to refuse consent,

· that they have the right to withdraw consent at any time during the search.

The officer shall inform the person from whom consent is sought their consent to search will be captured by the officers' BWC (Body Worn Camera).

"There are communities where we are seeing an abnormal amount of violence and they certainly need us to do our jobs so as long as you're within the bounds of your policy and your laws you should be able to go out there and confidently police and we want our officers to do that," James said.

Some changes the Forsyth County Sheriff's Office has made since last year include additional mental health and background checks for deputies. De-escalation training and re-emphasizing the importance of properly functioning police body cameras. Sheriff Bobby Kimbrough said excuses for not turning on the provided cameras when approaching a scene are no longer acceptable and are deemed a serious violation of protocol.

"If you respond to a call, your body cam will be working, shall be working. That excuse of I forgot to cut it on that doesn't fly here because that body camera is there for a reason," said Sheriff Bobby Kimbrough.

Kimbrough also said his officer welcomes video from members of the public who are a witness to law enforcement activity. They are also working on increasing the presence of more surveillance cameras in the community.

"We like to critique them. Sometimes we get videos of our officers doing good things so we want the good the bad and the indifferent. We want to know when our men and women are doing something," Kimbrough said.

Alamance law enforcement does not want a repeat of what happened in Minneapolis in the shooting of Daunte Wright.

The bright yellow tape will be added to Alamance County tasers so that the guns are not mistaken as real firearms, ACSO officials said.

The Minnesota officer who killed Wright on Apr. 11 claims she mistakenly grabbed her gun instead of her taser when attempting to subdue Wright.

Wright's death sparked protests in Minneapolis similar to what was seen following the death of George Floyd. Wright was shot during a traffic stop. Soon after, the officer went on administrative leave.

Alamance County Sheriff Terry Johnson has reached out to the company that provides its office with taser guns to request new, completely yellow tasers.