Teachers To Take Demands To Raleigh On May 16

North Carolina could be the next state to see teachers take action. Some teachers from across the state plan to rally at the state capitol on May 16. 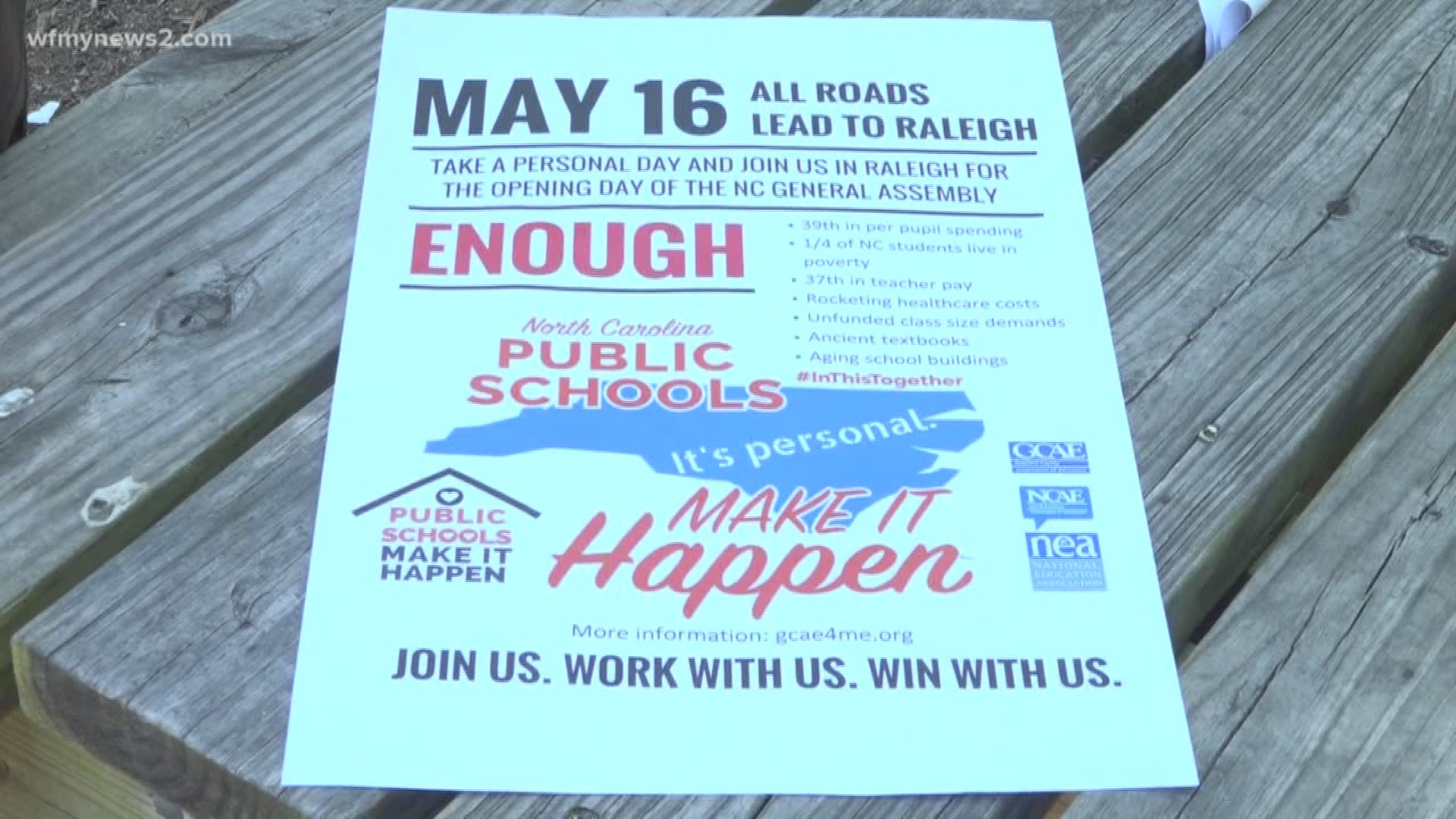 GREENSBORO, N.C. -- Over the past few weeks, teachers have walked out in several states. They have been demanding better pay, more security and in some cases improvements to their pensions. North Carolina could be the next state to see teachers take action.

Some teachers from across the state plan to rally at the state capitol on May 16. They have called it a day of advocacy and it is also the day the general assembly reconvenes. The march is being organized by members of the North Carolina Association of Educators and they're marching to get legislators to act on providing more funding for schools and teacher salaries.

North Carolina is ranked 37th for teacher pay which is about $9,600 behind the national average. Teachers also want pay raises for support staff such as school bus drivers, cafeteria workers, and teaching assistants. They're also fighting for improvements to school facilities, new and upgraded textbooks and better health benefits. These demands are similar to those being made by teachers in others states, some of whom have gone on illegal strikes.

"I think that it is a sad commentary on our nation and our state that from West Virginia to Oklahoma to Arizona and now North Carolina, that teachers are having to protest for better compensation and working conditions," said Representative Amos Quick III of Guilford County's District 58.

The Guilford County Association Of Educators has called on schools to give teachers a personal day to attend the rally.

"We are hoping that thousands and thousands of educators go to meet with their legislators and ask them about our low levels of school funding and why we are now 39th in the nation per pupil spending here in North Carolina," said Todd Warren, the president of G.C.A.E, a local chapter of the N.C.A.E.

"If the general assembly had adopted my budget last year we would be on our way to making sure we got teacher pay to the national average," said Governor Roy Cooper who was at Guilford Tech Community College to announce his workforce budget recommendations.

"We are going to work hard to support these teachers and to make sure we keep them in the classroom."

Statements of support have poured in for the teachers from some state representatives.

"North Carolina should be leading the way in the southeast when it comes to education; instead, we find ourselves fighting tooth and nail for every modest gain," wrote Rep. Cecil Brockman.

"Teachers find themselves working two jobs and paying for supplies out of pocket. And their small pay increases cannot keep up with rising health costs. We can and must do better," wrote Rep. Pricey Harrison.

While not in direct reference to the planned rally, a statement on Representative John Faircloth's website reads, "I support a public school system with devoted teachers, properly compensated, who produce well-educated students, prepared to compete in society and a world economy."

Although the teachers support the school system, and the proposed budget set out by leaders, they believe it's time for the state to address the fact they've dealt with underfunding for too long.

Triad school districts said they did not anticipate any interruptions to the school day. Winston-Salem Forsyth Schools specifically reported less than 170 requests and notices of absence for May 16 but average about 450 absences a day district-wide. The district employs about 7,000 people with about 4,000 of them being teachers.

Alamance-Burlington Schools reported below average for requests for substitute teachers for Wednesday, May, 16. Guilford County Schools also reported no abnormality in requests for that day.

By law, teachers in the state cannot strike because they are public employees. The G.C.A.E said that they currently anticipate approximately 1200 people at the rally.