Audiologists warn against exposure to loud noises over extended periods of time, but it's become more difficult to avoid damaging sound. 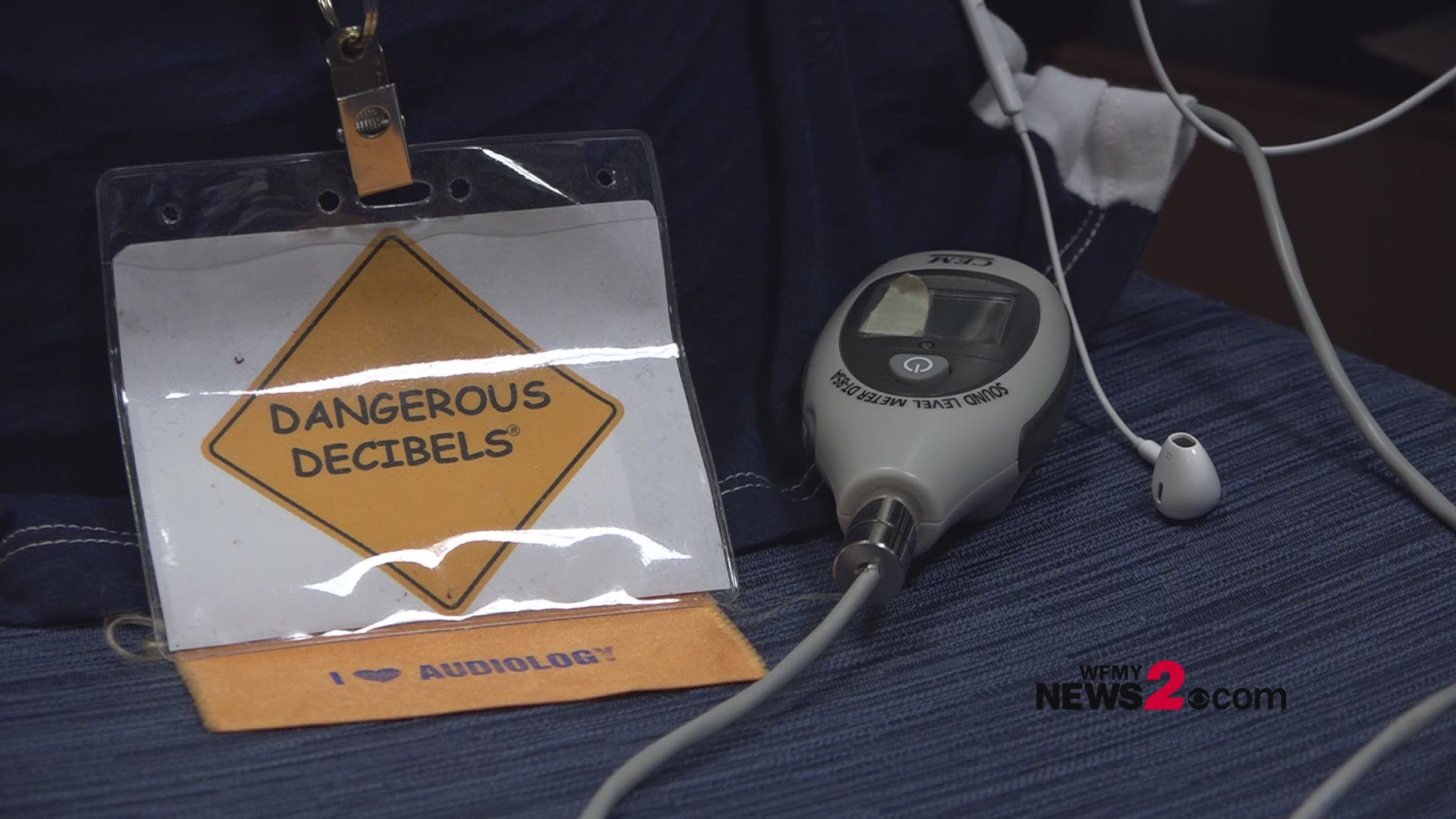 GREENSBORO, N.C. — Walkmans, iPods and now iPhones. We’ve had access to music and sound on-the-go for the better part of four decades now, and people are experiencing the effects.

“Some studies have shown that cases of noise-induced hearing loss has almost doubled compared to what it used to be,” said Dr. Lisa Fox-Thomas of the UNC Greensboro Speech and Hearing Center.

Dr. Fox-Thomas’ audiology specialty lies in tinnitus, the ringing you hear in your ears when they’ve been damaged by noise, and she has extensive knowledge in the causes and effects of noise-induced hearing loss.

Noise-induced hearing loss, put simply, occurs when a person is exposed to 85 decibels of volume or louder over an extended period at any given time. Research has proven that if people hear noise that is too loud, for too long, their ears will be damaged. The variables differ from person to person based on age, health factors, external circumstances and genetics, Dr. Fox-Thomas said. However, what is consistent among studies in audiology is humans today are exposed to more noise that puts us at risk for hearing loss than in the past, and it’s impacting people at earlier ages. The World Health Organization recently estimated 1.1 billion young people (aged between 12 and 35 years old) face hearing loss as a result of noise. Additionally, what is defined as “too loud” is often quieter than you might expect.

“What’s most interesting, or concerning, is that some research shows nowadays 1 in 5 teens have hearing loss,” said Dr. Fox-Thomas, “generally we’ve seen people come to [UNCG’s clinic] in their middle ages.”

Understanding how the damage of inner ear hairs effects hearing loss, decibel levels and the finer technical jargon of audiology might be difficult to piece together, and therefore easy to dismiss.

Generally, audiologists agree that exposure to 85 DB for more than five hours a day is the baseline for noise-induced hearing loss. Eighty-five decibels is the equivalent of standing beside the four lanes of traffic on Battleground Avenue in Greensboro, North Carolina during rush hour. Most people are not directing traffic or street drumming, but that threshold is reached every day at factories, construction sites and concerts. More commonly, people often listen to music on their mobile devices at significantly higher levels than are safe to protect their hearing, Dr. Fox-Thomas said.

“A good rule of thumb is the 60-60 rule. If you listen to music on your phone at a volume higher than 60 percent for more than 60 minutes a day, you may be damaging your ears,” she said.

This is what 60 percent volume roughly looks like on an Android and iPhone:

The threshold might be lower than you can expected. Fox-Thomas said there is not any difference whether you listen with or without earbuds, headphones or through a speaker.

Today, there is no cure for noise-induced hearing loss. Hearing aids are the most common treatment, and they can be expensive. Base-level devices cost around vary from hundreds to thousands of dollars depending on the level of technology needed and the service that is included. Over-the-counter, devices have also hit the market, but Dr. Fox-Thomas said they do not include the professional services needed to appropriately fit and adjust the device. Those over-the-counter hearing aids still range in the hundreds of dollars.

“You pay for what you get,” she said.

Disclosure: UNCG’s Speech and Hearing Center has a practice that prescribes and sells hearing aids.

Awareness and reducing exposure to those louder noises, Dr. Fox-Thomas said, is the best way to prevent hearing loss.

“There are apps that actually will tell you how loud it is where you are,” she said, “so that could be part of the first step. You’re surrounded by loud noise more often than you think. Over time, that has an effect on your ears.”

RELATED: Baby Hears for the First Time in Emotional Video

RELATED: Having A Hard Time Hearing? You May Have One Of These Curable Issues