Too Many Returns Can Get You Banned!

How many returns is too many? A man was banned from using his Amazon Prime account because he made too many returns. 2WTK checked into other store and retailer policies as well. 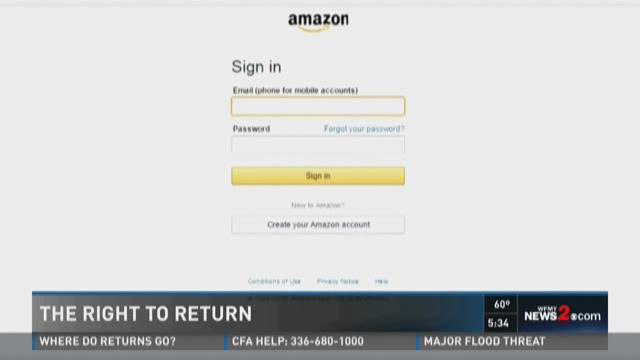 2WTK started digging into return policies. We picked two of the most common retailers: Walmart and Target. WKYC dug into Amazon after a man was banned for too many returns.

Walmart's no receipt policy*applies to items returned in a store only and there's a cap. You can make up to three returns without a receipt, within a 45 day period.

Target's policy gives you 90-days for a return with a receipt. But if you don't have a receipt or the item is open or damaged, Target can deny you a refund or an exchange. Both retailers make their policies clear.

But not all retailers tell you what their return threshold is. For example, when Paul Seletsky unexpectedly had to furnish an entire home after his divorce, surgery for cancer and a broken wrist, he turned to Amazon for help.

"I needed a TV, I needed pots and pans, I needed everything." But shopping exclusively online made it harder for him to decide which styles or brands he preffered.

"So typically I would order, lets say 3 sets of pots and I would select one that I wanted andI would return the two. And I have Amazon Prime so I thought there's no problem, I have 30 days to return whatever it is and that's what I did. And I was able to comparison shop."

Just when he thought everything was going well, in the midst of his shopping, Amazon locked Jim out. Paul learned via email that Amazon canceled his subscription for making too many returns!

Amazon wouldn't speak with him by phone, so in an email he explained the reasons for his excessive returns. "I wrote to them, ok I've been a bad boy but I've had this situation, I wasn't ambulatory, I was you know had all these injuries."

Amazon's response? An email that stated, "After a careful consideration, we've determined that our business relationship must end," Disappointed Amazon wouldn't restore his subscription, he also couldn't access any of the electronic books he'd purchased with his new ipad.

After WKYC reached out to Amazon, Paul got an unexpected email from the company saying, "After further consideration we've reinstated your Amazon account."

So, what's the chances that when you order something in the future you're gonna send it back?

Amazon did reach out to Paul after the TV station contacted them on his behalf. When asked how many returns might trigger a subscription cancelation, Amazon wrote back, "unfortunately, these are not issues we can discuss."