Why Viral Post About Compassionate Little Boy Is Misleading

GREENSBORO, NC -- A viral post on social media could be misleading some people into think they can save a loved-one’s life by donating blood on the spot for an emergency procedure, according to medical experts at the Red Cross and the Community Blood Center of the Carolinas. 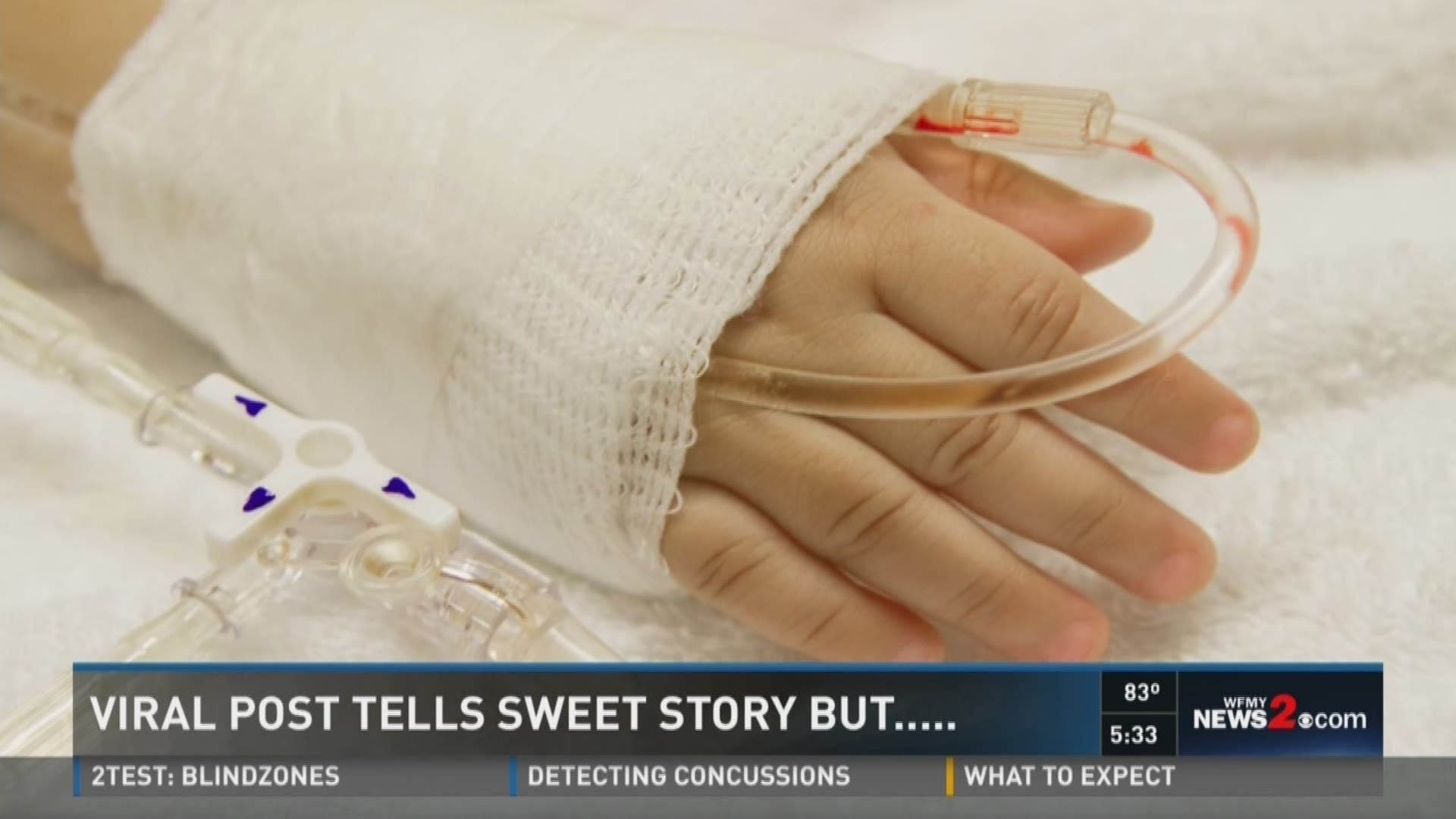 GREENSBORO, NC -- A viral post on social media could be misleading some people into think they can save a loved-one’s life by donating blood on the spot for an emergency procedure, according to medical experts at the Red Cross and the Community Blood Center of the Carolinas.

The post purports to be from a surgeon named Jim Clark.

It reads: "Today, I operated on a little girl. She needed O-blood. We didn't have any, but her twin brother has O-blood. I explained to him that it was a matter of life and death. He sat quietly for a moment, and then said goodbye to his parents. I didn't think anything of it until after we took his blood and he asked, "So, when will I die?" He thought he was giving his life for hers. Thankfully, they'll both be fine."

“It's a touching story. It would be a great movie line,” Gary Brant with Community Blood Center of the Carolinas said.

But, there are a few problems.

“For that to happen in a hospital, it's really unheard of, Brant said.

That's because it would put the patient at risk, according to the donor recruiter of the CBCC office which supplies blood to area Cone Health hospitals.

“The first thing that wouldn't happen is, they wouldn't call someone and go out into the waiting room and say, ‘hey we need blood’ and take it right on the spot,” Brant said.

In fact, it can take up to 10 days from the time someone donates blood to the time a doctor can actually use it in an operation.

“What we do is, once you donate, the blood goes back to our lab in Charlotte. At that point, vials of the blood will be sent off to the testing lab and from that point, goes through several tests, to ensure its safety,” Brant explained.

Another reason this couldn't happen here in the United States?

“The little boy would not be able to donate to his sister,” Brant added.

Blood donors have to be at least 16 years old, with parental approval.

While it’s a sweet, compassionate story, Brant hopes people sharing it on social media understand, in the real world, it doesn’t play out like that.

However, one thing Brant does like about the viral post is that it could raise awareness about the need for blood donations.

“That’s the really cool part about this post. It's that, it brings awareness to blood donation, and how important it is for folks to step up and donate because it can't be replaced any other way,” he said.

To be clear, people can donate blood to family members or other loved-ones.

The donor would need a doctor’s approval and schedule the donation in advance.