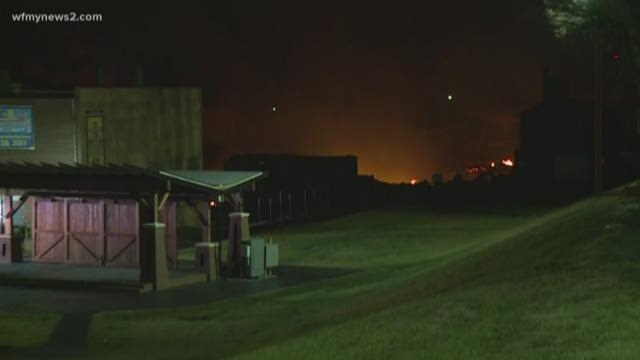 LEXINGTON, N.C. – A massive fire at the old Lexington Home Brands Plant 1 has been contained, according to city officials.

The Davidson County 911 Center says the fire was called in shortly after 5 p.m. Tuesday at one of the old plant's buildings on Elk St and 5th Ave Extension.

Lexington Mayor, Newell Clark tells WFMY News 2 it's the second fire at the same plant today. He said crews responded around 2:00 a.m. Tuesday for a fire and put it out. Mayor Clark says both fires happened in the same building, but firefighters haven't determined if they are connected, or how they started. No one was hurt.

Thomasville and Salisbury fire departments assisted with putting out the flames.

Mayor Clark said the building has been vacant for a while and there is no electricity in the building. He says the fire damaged about 200 square feet.

Mayor Clark says prior to this fire, the city was in talks about how to preserve the history of the old furniture plant. He says they've been in talks with the NC Historic Preservation office about ways to bring new life into some of Lexington's old spaces, including this old factory.

There are two breweries and a distribution center for Lexington Home Brands on the old plant's widespread campus. Mayor Clark says none of these buildings were damaged by the fire.

Mayor Clark tells WFMY News 2 the saddest thing about what happened today was watching a "major part of the city's history collapse."