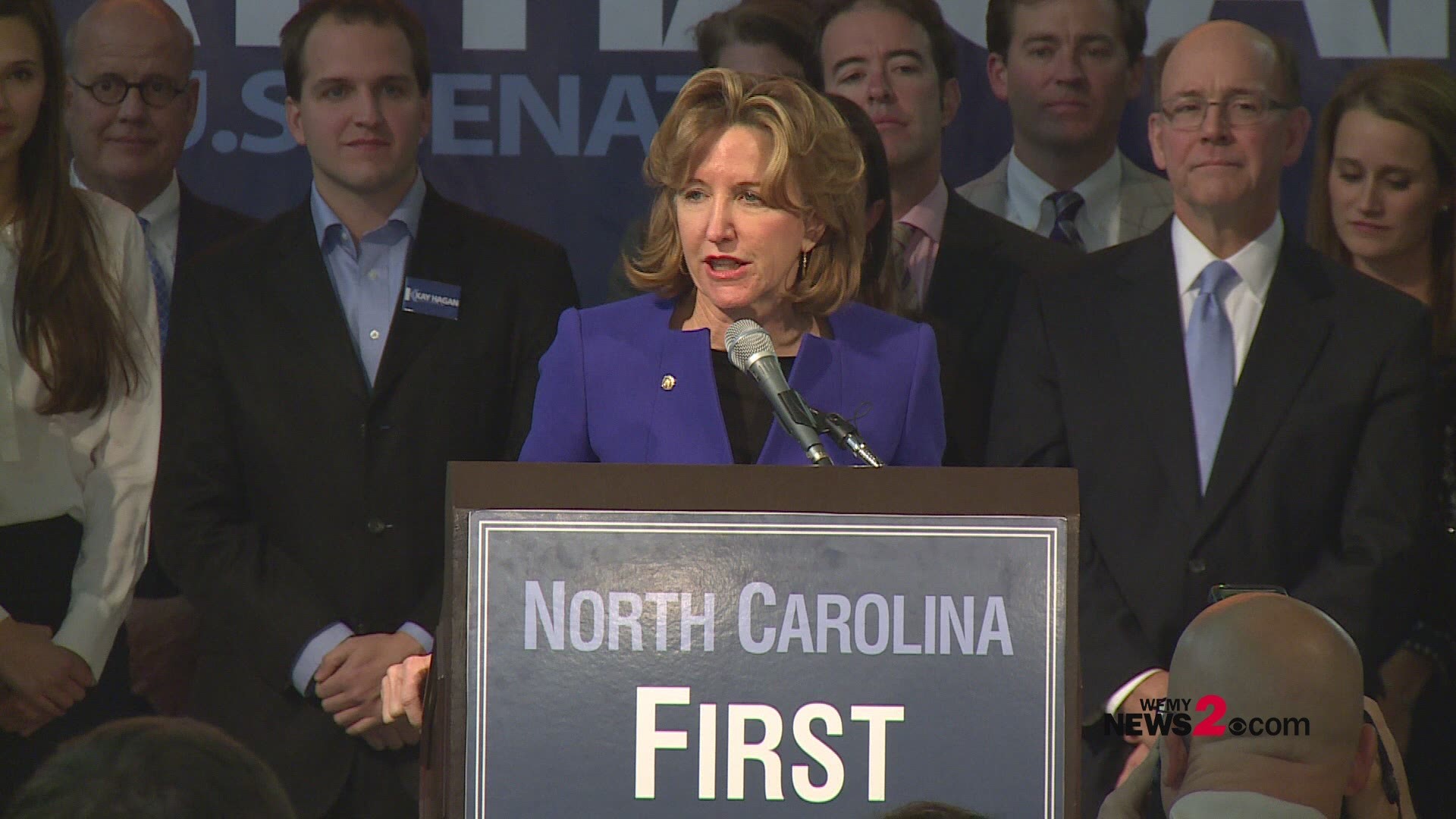 NORTH CAROLINA, USA — The family of former U.S. Senator Kay Hagan says she has died. She was 66.

Her family says she passed away Monday morning at her home in Greensboro. Hagan was hospitalized in December 2016 after contracting encephalitis - a tick-borne illness which caused brain inflammation that made it difficult for her to speak and walk. Hagan's family released the following statement:

"We are heartbroken to share that Kay left us unexpectedly this morning. Kay meant everything to us, and we were honored to share her with the people of North Carolina whom she cared for and fought for so passionately as an elected official. Most of all, we already miss her humor and spirit as the hub of our family, a role she loved more than anything. Nobody could light up a room and make people feel welcome like Kay.

We are deeply grateful for the support shared with our family as Kay worked to regain her strength these last few years after her illness, and we appreciate your continued prayers."

Hagan was a North Carolina Democrat who was elected in 2008 and served one term before she was defeated by Republican Thom Tillis in 2014.

During her time on Capitol Hill, she was a champion of the Affordable Care Act as well as efforts to release documents pertaining to water contamination at Camp Lejeune.

Hagan appeared at a dinner event in Greensboro last month and received a showing of support, according to a tweet by Guilford Democrats.

Several lawmakers are beginning to share their condolences regarding her death.

Kristin and I are deeply saddened to learn of the passing of our dear friend Senator Kay Hagan. I’ve known Kay since our days in the legislature together. Kay was a fierce advocate for North Carolina, and she represented our state with courage and grace her entire career. She made it a mission to inspire young people - especially young girls - to enter public service, and she served as a role model to so many. North Carolina is mourning one of our best today.

Susan and I are absolutely heartbroken by Senator Kay Hagan’s sudden passing and we extend our condolences and prayers to her loving family and many friends. We join all North Carolinians in remembering her dedicated and distinguished record of public service to our state and nation.

Brooke and I are deeply saddened by the sudden and untimely loss of Kay Hagan. Kay dedicated much of her life to serving North Carolina, and she will be remembered for her tireless work on behalf of the home and the people she loved. In our time as Senate colleagues, we worked across the aisle together frequently on issues that we both knew would determine what type of country our children would inherit, from conservation to our common defense. She tackled everything she did with a passion and a sense of humor that will be missed. Our thoughts and prayers are with her family.

“My heart goes out to Chip Hagan and the entire Hagan family in the passing of Kay. Sen. Hagan was dedicated to serving North Carolinians and especially to the men and women of the Armed Forces in America’s most military-friendly state. Chip has exemplified the devotion, love and care that every husband should aspire to.”

“Senator Hagan represented the very best of North Carolina both as a committed public servant and an accomplished executive in the private sector,” Speaker Moore said.

“Her tragic death is a shock to the citizens she served faithfully in the General Assembly and the U.S. Congress. I join millions of her fellow North Carolinians remembering her immense contribution to our state and sending her family our deepest condolences during this tragic time.”

"We are saddened to learn about the passing of former Senator Kay Hagan. Mrs. Hagan served her state admirably, advocating for its citizens in the state legislature and the United States Senate. She remains in our thoughts, and our sincerest condolences go out to her husband Chip and her family during this difficult time."

This is a developing story. Stay with WFMY News 2 on air and online as we continue to learn more about the passing of Senator Hagan.